EDMONTON, Alta. – If there was an incessant issue in Alberta that stirs Ken Rosenau’s emotions more than most, it would be safe to say that the legislation of wide-base single tires would be near the top of the list.

“Quebec, Ontario and Manitoba have all legislated it,” Rosenau said. “With all the data and studies already in place, why is it taking so long?”

Alberta Transportation, along with the Alberta Motor Transport Association (AMTA), is currently conducting a pilot project to determine if wide-base single tires would be a viable alternative to the traditional dual tire in an effort to save fuel and help the Government of Alberta make future decisions on the new generation tire. 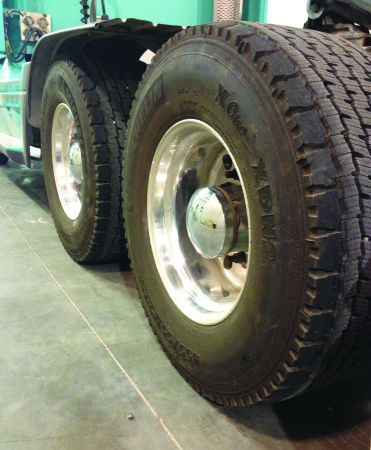 Initially, Westcan Bulk Transport was the lone company conducting the testing, making runs between Edmonton and Calgary from July 1 to Aug. 31 carrying the maximum allowable axle loads as permitted on a two-tire configuration. Westcan made 98 trips per week (14 per day) on this same run, which the government said would limit the number of variables to measure, making the data easy to decipher.

But as Rosenau, president of Rosenau Transport, explained to Truck West, his company is also testing the wide-base single tire and will end Phase 2 of the project at the end of January.

Since September, Rosenau Transport has been doing the same run between Edmonton and Calgary with full weights on the super singles, but also on Highway 63 to Fort McMurray and Highway 43 to Grande Prairie.

The next phase, which Rosenau said would not happen for some time, would be either getting legislation on the wide-base single tire or move to a permit system to allow full weights on all primary highways in Alberta.

“The government is still looking at road damage and its infrastructure, such as bridges, before anything happens,” Rosenau said. “We are running three dual and three super single trucks with various weights and configurations and comparing the mileages between them. Super single trucks have better fuel mileage to date than the duals.”

Rosenau said in addition to improved fuel mileage, wide-base single tires have longer tire wear than duals, improved stability and better monitoring of air pressure (adding that 20% of the time, the inside tire on a set of duals is underinflated, which he said results in more damage to roads than wide-base single tires).

The Alberta government has indicated that wide-base single tires cause more damage to pavement, meaning their adoption would require additional road maintenance.

Lorraine Card, president of the AMTA, echoed the fuel saving results indicated by Rosenau, as well as other benefits.

“The data continues to be collected and analyzed as we enter into winter driving conditions,” Card said. “Since the pilot began July 1, we have seen no incidents as a result of running (super singles). The drivers testing this technology have commented on improved performance of the vehicle.”

Card said a minimum of 10 drivers were selected from each Westcan and Rosenau Transport and were trained on the operation of wide-base single tires, as well as the pilot project’s requirements.

Truck West contacted Westcan several times for comment on its participation in the pilot project, but the company declined to comment.

Adam Johnson, a public affairs officer with Alberta Transportation, said in addition to measuring the fuel efficiency of wide-base single tires during the pilot project, the effort has also served as a forum for discussion with stakeholders, including a small group of municipalities and the Alberta Climate Change Office, on the future benefits and challenges of future implementation.

Though he concurred with Rosenau and Card that initial results indicate less fuel consumption when using super singles, Johnson said specific numbers were not yet fully comprehensive.

He also eluded that the testing could continue well past the Jan. 31 deadline of the current phase.

Like Rosenau, Card would like to see some decisions be made on super singles sooner rather than later.

“The AMTA would like to see the new generation wide-base single tires receive weight parity with standard dual tires on all Alberta primary highways,” she said.

Though super singles are legally permitted for all trucks, but at a reduced axle load, Johnson said no decisions have yet been made to mirror what some other provinces have legislated.

“Future implementation is still being discussed with stakeholders and studied by Alberta Transportation,” Johnson said. “The outcome of our pilot project will inform future decisions.”

Card said the AMTA appreciates provincial and municipal governments participating in discussions to potentially allow for the use of wide-base single tires in Alberta, and added that the pilot project is aligned with the provincial government’s target when it comes to cutting greenhouse gas emissions.

“With Manitoba part of the New West Partnership Trade Agreement,” Card said, “and having legislated these tires on certain highways with parity to dual tires, this sets precedence for Alberta in removing trade barriers across western provinces.”

Chances are, Rosenau would agree, and didn’t beat around the bush when voicing his feelings on the matter.

“The Alberta government needs to shit or get off the pot on this one.”