REGINA, Sask. — For Heather Day, it would have been strange to not be part of her family’s trucking company.

Stretching her professional legs across the pond for eight years as a teacher, Day found herself in the office at C.S. Day Transport every summer helping wherever she could.

It came naturally for her, growing up around trucks, drivers, and the company her grandfather first conceived in 1936. 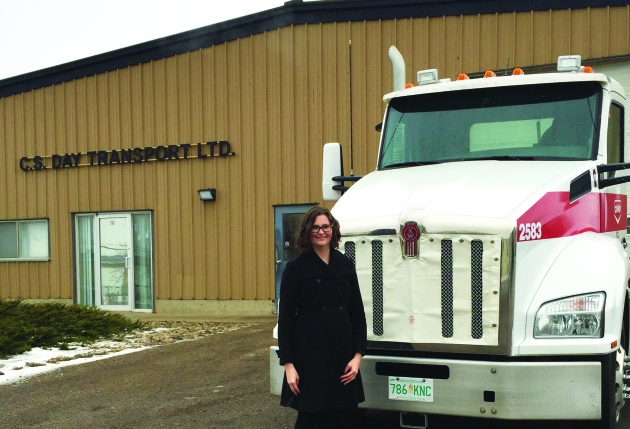 “I remember when I was quite little that my dad would bring my sister and me out to the shop on weekends when he would wrap up paperwork,” Day recalls. “My sister and I would play in the shop and climb around in the trucks. We also met drivers and played with their kids at the annual children’s Christmas party.”

As Day got older, she helped more around the office, always making time for the drivers, curious to learn what each had been up to.

Today, C.S. Day Transport has evolved from when Day’s grandfather, Chester Day, got the company off the ground.

After enlisting to serve in the Second World War, Chester returned to the industry, starting what is known as C.S. Day Transport after relocating to Regina in 1971. In the late ‘80s, Heather’s father, Dennis Day, and uncle, Doug Colhoun, bought the business from their father. Dennis and Doug ran the company until their retirement in 2012, and now, along with a business partner, Heather is in the process of purchasing the company from her father and uncle.

Many of the company’s drivers are parents, because as Heather points out, with a fleet made up entirely of day cabs, each of the 40 drivers makes it home to their family after every shift.

In 2018, Heather said she will be looking to add a few drivers to her roster, something that does not occur that often given the company’s track record.

“We have very low turnover,” Heather said, adding that it’s been well over a year since a driver has chosen to leave the company for another opportunity. “We have a very rigorous hiring process to make sure we only put the safest drivers behind the wheel, so it can be quite the journey to find the best people.”

And that’s what it’s about for C.S. Day Transport – finding the best qualified candidate for the job.

Given the growing desire for many trucking companies to diversify their workforce, Heather said simply focusing on an applicant’s background or demographic is not the only factor that should be considered.

“When I worked in London, England, the shoe was on the other foot and I was able to experience for myself what it is like to be a newcomer,” Heather said.

Because of this experience, Day makes a conscious effort to keep a close eye on her company’s hiring process to ensure all qualified applicants are treated fairly.

“We fully believe in diversity and I believe that hearing viewpoints from the widest possible range of people helps me to learn and to make better decisions,” she said.

During the last six years, C.S. Day Transport has tripled the number of women it employs and quadrupled its number of new Canadians.

And despite the hype surrounding new technologies and possibility of autonomous trucks, Heather says drivers will be needed for many years to come.

“We all need to be mindful of the wording we use to describe these technologies and differentiate between autonomous vehicles and those with advanced driver assistance systems, lest we scare off the next generation of professional drivers,” Heather cautioned. “Until autonomous vehicle technology has advanced to a point where drivers are not needed at all, until the technology has been proven to be safer than a human driver, and until it can be applied to our sector of the industry, I am going to need skilled, human drivers.”

Being a young woman, Heather has had to face her own unique challenges during her career, none of which, she said, are specific to the trucking industry.

“I guess I was sometimes worried there might be a bit of a ‘boys club’ at networking events,” she said, “but the vast majority of people have been very welcoming and supportive, often telling me that they think the industry needs even more women.”

Balancing her professional life and role as a mother can be a tough act to juggle.

“You can’t really step away from a business for a year to take a traditional maternity leave because there are some projects that you simply cannot delegate,” Heather said.

Feelings of guilt leaving your newborn child to be in the office, and similar regret when not addressing matters at work, can weigh on any parent.

“We are all still working on finding the right balance between these roles,” Heather admitted, “particularly when our children are very young.”

There is some solace in the fact that Heather is an integral cog in her family’s thriving business, and that the environment at C.S. Day Transport is very much like a family.

“We have a lovely, tight-knit bunch of people who work very hard,” Heather said, “and it would have felt very strange to not continue to be a part of it.”