Okay, so I had a really, really good reason to miss that platooning demonstration. I was in Las Vegas for the introduction of the Western Star 5700, the truck maker’s first foray into the aerodynamic on-highway tractor segment.

It’s been a while since we’ve seen the introduction of a completely new truck, one that looks nothing like any other truck in the market. Love it or hate it, I’d say the International LoneStar would be the last truck to fall into this category. But I shouldn’t have said that to Western Star g.m. Mike Jackson, who retorted, “What about the (Western Star) 4700?” Touche. 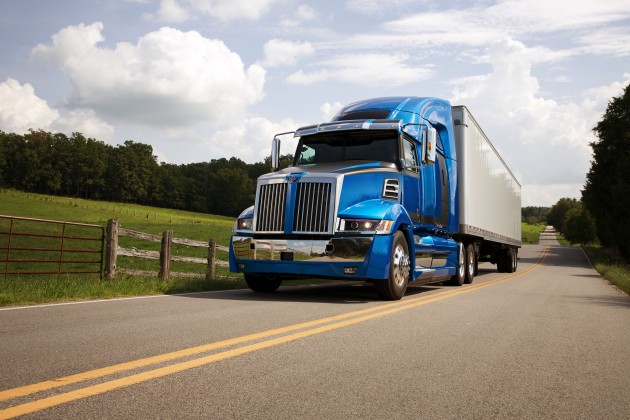 The 4700 is a ‘baby 8’ that targets a narrower segment of the market, so I’ll stick to my stance on this one, but that truck has done good things for Western Star and I’ll get into that in a bit. Anyways, back to the 5700. I was really excited about the launch of this truck, partly because of all the buzz Transformer truck Optimus Prime generated at this year’s truck shows. There’s a truck that can draw a crowd, and Western Star people hinted there’d be some similarities between the Hollywood creation and the production model we’d be seeing this September.

Now it’s time to dispel a myth. Many will think Western Star borrowed some design cues from Optimus Prime. In fact, it was the other way around; the 5700 was quite far along its development curve when Hollywood came calling. It takes longer to design an all-new truck than you’d think. So in reality, it was Hollywood producers that liked what they saw and then designed Optimus Prime around the 5700. No kidding!

So the Western Star 5700 was appropriately unveiled to us truck writers on a starry night in Las Vegas. And it did not disappoint. This is a truck that achieved excellent aerodynamics and fuel efficiency (so we’re told, it’s too early for us to validate those claims) while retaining the brand’s distinctive appearance. Here is my initial report on the new truck, including a photo gallery with many images. Please check it out, if you haven’t already, and proceed to the next item for a report on how it drove.