For those who take pride in showing their trucks, it’s a relief to scrub the salt from the tires and show off their rigs as sunny summer skies provide the perfect backdrop to the glistening chrome and fresh paint jobs found at the truck show. For those who just like to look, it’s an opportunity to bring the whole family out, meet fellow truck lovers, and get some inspiration.

Not sure which truck show is for you? Not to worry. We’ve rounded up the essential truck shows for big rig lovers of every type, so you can decide which one to check out this 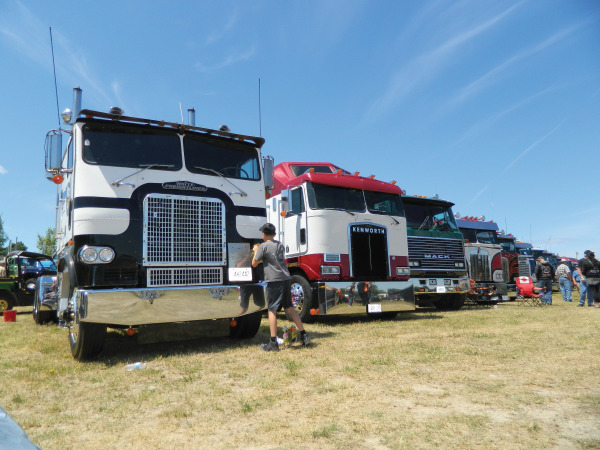 For the nostalgic:
Clifford Antique and Classic Truck Show

Now in its eighth year running, the Clifford Truck Show is an event for antique lovers of all ages. Come one, come all to the event that has those thinking of a simpler time.

The truck show is known for its antique, untouched trucks and fully-restored rigs.

There’s no contest here. Simply bring your truck to the show, and have a good time, explained organizer Verdun Zurbrigg.

“It’s a laid-back show,” he said. “We don’t have judging. There are no winners or losers. So, there’s no pressure for those who want to display a truck. We just want to make it easy for them, so we tell them to wash them and bring them. That’s it. It’s a visiting weekend for people. Every year people come back to see old friends they’ve made and meet new people.”

Zurbrigg said that the event gets a lot of love for showcasing cabovers of all ages and trucks that you wouldn’t see at your typical truck show.

“People come because it’s different,” he said. “Nobody is doing old trucks. Not as big as us, anyway. Last year we had 280 trucks registered. And people love to see
the cabovers.”
The event is a family-friendly one, said Zurbrigg, where children are encouraged to come in and soak up the activities. Partying is discouraged.

“Lately we’ve been gearing towards the older generation,” Zurbigg added. “Because that’s who ran the old trucks. So, we’re trying to cater more to older people. We accommodate them with prime parking and offer shuttle services to them around the grounds.”

After the news hit earlier this year of the Fergus Truck Show coming to an end, many were disappointed the fan-favorite long-standing truck show was gone for good.

Like Jennifer Hatch, a long-time race car driver and Fergus volunteer. When the news broke, Hatch had an a-ha moment and thought, what if they moved the truck show to a race track? “Because you know truckers love NASCAR,” she reasoned.

She phoned up an old friend, Gord Bennett, owner of the Full Throttle Motor Speedway in Durham, Ont., not far from Fergus, and pitched the idea to him. Shortly thereafter, the Great Canadian Truck Show was born.

“It was just kind of a no-brainer to reach out to him,” she said, adding the show is set to take place the same weekend Fergus would have been on, July 21-23.

The event is being put on by a mix of old and new volunteers, including Hatch herself, who said the idea was to really give a different spin to the truck show and essentially “bring it back to grassroots.”

On Friday, along with the Show’n’ Shine that spans through the weekend, the event will have truck pulls on the inside of the racetrack.

But if you opt to come out on Saturday, you’ll get the most bang for your buck, Hatch says.

On Saturday, your ticket will grant you full access to the truck show grounds, complete with access to all vendors and food trucks, and will also get you tickets to the regular race night.

The price for an adult is just $13, a strategic price, according to Hatch. Affordable camping is also available on the grounds, while children can get in for a mere $2.

“Fergus had priced itself out of the market and people just didn’t feel like they were getting good value,” she said. “So, we wanted to change that and make it affordable for everyone.”

And even though it’s too early to talk numbers, Hatch says organizers are expecting a good turnout at the debut.

For the thrill-seekers:
Rodeo du Camion

This event, now in its 37th year, is almost a Mecca to truck lovers. How else do you explain the town with a population of just over 1,000 people expanding to more than 20-30 times that over the course of the weekend?

Tens of thousands of people flock to the small town for the Rodeo du Camion’s renowned heavy truck races, where loaded and even bobtail trucks race up a 12% grade with a circuit length of 700 feet. The competition goes on for two days, so there is plenty of time to pick a favorite and see if he or she takes home the prize.

The show also features a Show’n’Shine competition, plenty of food and beverage vendors, live music and entertainment, and tons of activities for kids including bouncy castles and trampolines and bungee jumping. If you’re a truck driver or fan of the industry, this show is a must-see.