BLAINVILLE, Que. — The PIT Group launched its 11th year of Energotest trials at Transport Canada’s test track in Blainville, Que., May 29. The big topic in the May 29-June 9 trials was tires: measuring the relative fuel consumption of five tire brands and taking a little peek at recapped wide-base tires in this session. PIT Group will make a more detailed comparison of duals and recaps this September.

Although PIT Group conducted tire trials to better understand fuel consumption in 2010, 2008 and 2007 (the year before FPInnovations created PIT Group in 2008) this is the first time that multiple tire manufacturers have willingly participated. 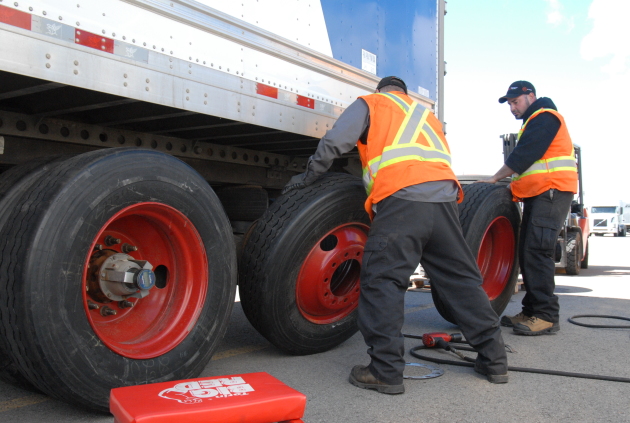 Thinking back to 2007, Yves Provencher, director of marketing and business development, PIT Group, recalls, “The funny part is, in the first year, members asked us to do these tire tests. We called tire manufacturers and none wanted to participate. They said, ‘We’re not playing that game with you guys’.”

Eleven years later, the collective voice of PIT Group’s 46 member fleets is much larger and harder to resist: Bridgestone, Firestone, BF Goodrich, Continental and Goodyear contributed low rolling resistance tires, all on the list of SmartWay-verified technologies, for a comparison of their fuel consumption to each other, and to control tires from an unnamed manufacturer.

PIT Group designed the trials to follow two TMC protocols. The first, TMC Fuel Consumption Test Procedure-Type II, used several pairs of two trucks over the test days. One truck ran every day with control tires on the steer, drive and trailer positions; each truck carried 18 tires. The other truck in the pair ran one of the five above-named brands each day, yielding fuel consumption comparisons between each of the named brands.

One rig ran with a set of the unnamed control tires. Each of the other trucks carried a set of one of the participating brands. Each morning’s trials consisted of three one-hour runs around the 6.5-kilometer, high-speed oval track at 105 km/h.

Every afternoon and evening, the tire changing crew (to be clear, the crew changed identical rims mounted with the tires, not just the tires) switched the wheels onto a different truck. This way, each brand’s 18 tires spent track time on each truck, to make sure that any differences in fuel consumption could be attributed to the tires, and not any differences between the trucks.

Once all the data is crunched, PIT Group will deliver fuel consumption information on the brands and models to its member fleets.

“Our members wanted to have a clear picture about what is the best tire for their operation,” Provencher says.

PIT Group also compared the fuel consumption of some new and recapped wide-base single tires, but those tests were just a taste of what is to come this September.

“We did a small experiment with wide-base tires in preparations for the September test. There are a lot of questions about recapped tires (that will be addressed) in September. People are very concerned and want to know,” Provencher says.

One visitor at this Energotest was Dwayne Haug. Based in Camdenton, Mo., he has decades of experience running fleet maintenance, equipment spec’ing, purchasing, and managing entire trucking companies. Now he is an independent consultant and since last year, a business development consultant with the PIT Group, tasked with making U.S. fleets more aware of the group’s work.

“I have to say that PIT Group was a well-kept secret of Canadian fleets,” Haug says.

U.S. exposure to PIT Group’s work began a year ago, with a fleet symposium in Montreal. So far, six U.S. fleets, including U.S. Xpress, Covenant Transport and C.R. England have joined the PIT Group.

Out of the Montreal symposium was born the first U.S. test: fuel testing for U.S. Xpress. “They were not looking for just fuel efficiency, but the spec’ing of trucks. For example, matching with transmissions, gear ratios. The intent was more for live, rather than track tests. We developed a roughly 52-mile course around Chattanooga, Tenn. We had Freightliner, Kenworth, Navistar, Peterbilt, Detroit Diesel engines, Cummins engines, Eaton automated transmissions,” Haug recalls.

Haug comments on the importance of the upcoming September Energotest, considering how much the value of tire casings have fallen.

“Now you are buying a tire but you can’t dispose of the casing. How do you judge the tire, so you get the best use out of it?”

One of the messages Haug is spreading is how PIT Group’s mandate is evolving.

“You have to keep up with the technologies, but you have to develop tests that reflect the needs of equipment; for example, driver fatigue, developing tests for the technicians to help them in the development of training. We test the product to see how it operates, but from the fleet’s perspective you have to test for (reliability, etc.), looking at failure rates,” Haug says.

Then there is the initiative PIT Group is rolling out this year – the Fleet Efficiency Review – which PIT Group describes as, “a comprehensive analysis of fleet maintenance practices by recognized industry experts.”

“We will talk with fleet management about driver retention, maintenance costs, shop layout, and use our knowledge of vehicle testimony, spec’ing. This analysis is adaptable to carriers of all sizes and types of operation. We are open to discussion with companies to target and provide assistance in all areas. The providing of evaluation and possible areas of enhancement shall be put into a final report for the company’s use as it sees fit. But, after that, we do not simply walk away. It is a continuing communicative process and informational source for the participating company. This is but another aspect of the partnerships that we garner with our membership which is also open to non-members,” Haug says.

And if it is not already enough that PIT Group, with 263 tests done as of last September, has brought order to the chaos that sometimes passed for fuel economy testing, and with no shortage of new tests that its members want, Haug adds about the Fleet Efficiency Review: “We should be able to do more for our members than just test technology, but also put it into efficient and progressive practice.”