Being blinded by upcoming traffic headlights that are too strong can be as dangerous for a truck driver as it is for a motorist following a truck not being able to see the taillights at the rear of a trailer. Too much light can be as bad as too little; it’s a matter of balance and choices. 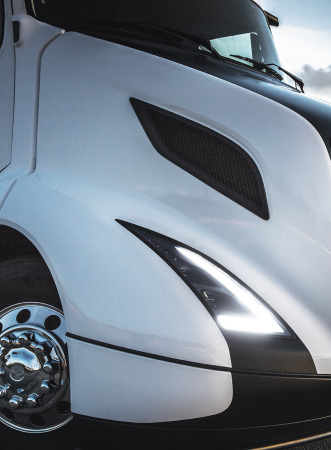 A choice that fleets encounter when it comes to lighting is opting for regular incandescent bulbs or light-emitting diode (LED) lamps. The latter have become increasingly popular in spite of their higher cost, because of the numerous benefits they provide: they draw less current, last longer, are generally brighter, and less vulnerable to vibrations. Incandescent bulbs also have advantages, including a major one in a country that can be snowy almost six months a year: they generate heat that can melt snow and ice so visibility isn’t compromised.

According to Mark Russell, professor and program coordinator, truck and coach technician apprentice at Fanshawe College in London, Ont., fleet managers shouldn’t be in a one-size-fits-all state of mind when it comes to lighting purchases. It depends on where lights are located on the truck. For instance, he prefers high-intensity discharge (HID) halogen incandescent lamps for headlights in most applications. They tend to have a longer range than LEDs and won’t get blocked by snow, thanks to the heat they generate.

Though he admits the popularity of LED headlights is ever growing among fleets and owner-operators, Ferland says they provide “more luminosity, but on a shorter distance, with a wider beam,” which allows better visibility around the front area of the truck.

LEDs also consume less power than incandescent bulbs, which means that smaller gauge wiring can be used, as well as a smaller alternator.

At the back of a truck or of a trailer, the LED’s brightness may be preferred to incandescent, but the absence of heat remains a problem in the winter. That’s the reason why many carriers, according to Ferland, will opt for a “hybrid” approach consisting of installing LEDs side by side with incandescent lamps to get the best of both worlds: LED luminosity and incandescent snow-melting ability.

Resistance is futile
Mixing LEDs and incandescent might seem a great solution from a safety perspective, but it can also lead to maintenance challenges as the two kinds of lamps draw different amounts of current and offer different resistance levels – both being higher with the incandescent – on a single circuit, which can require the addition of a resistance on the LED side to balance the circuit.

The LED’s lower current draw and resistance is the reason why some technicians will often install them on otherwise all-incandescent lighted vehicles. Even if the electrical system is in bad shape, the LED offers so little resistance that it will still light, whereas an incandescent bulb wouldn’t and the problem seems to be fixed.

“Shops are doing that now, because if they can’t find the high resistance connection to stop those lights from blinking or pulsing, then they put an LED lamp. It allows the lights to function again but the problem with that is when the issue shows back up again, you can’t mask it again for the second time; otherwise you’re just creating more problems in the electrical system,” Russell says.

Besides, a quick LED installation will not always be a solution. If resistance is too high in a circuit, an LED might simply not light at all, contrary to an incandescent.

“They’ll dim, you can barely see them but they still flash. They might flash erratic, but you’re still gonna have illumination,” the Fanshawe professor says of incandescent lamps.

Rust never sleeps
One way to eliminate unwanted resistance in a circuit is to keep the connectors clean and free of corrosion. “A regular inspection and lubrication of the connectors with sprays such as dielectric grease is the key,” says Ferland, adding that such lubricants should never be used on electronic module connectors, which are more sensitive to chemicals. Russell suggests using only electrical cleaners and lubes that are recommended by your OEM. Using a wire brush to clean corrosion off connectors is not necessarily a good idea, he adds, as you might be taking off some of the conductive metal at the same time as rust, creating more resistance in the circuit, which is what you wanted to correct in the first place.

“The best thing is to plainly replace bad connectors, there’s nothing else to do once they’re attacked by corrosion. No matter how hard you clean them, some resistance will always remain,” Ferland says.

Just ignoring the corrosion on terminals is not an option either, according to Enrico Fontaine, service manager at Centre du Camion Ste-Marie. “Rust will eventually rot the terminal and prevent it to feed current to the lights,” he says.

Road debris and calcium can also accelerate corrosion and be a source of unwanted electrical resistance. Wire harnesses should be washed on a regular basis, using water only, Ferland advises. And when using a pressure washer, never aim the water jet directly at connectors. There are grommets and other types of insulation materials to protect them, but there are limits to what they can take.

A damaged wire could also explain why a light does go on but stays dim. “If you only have a couple of filaments left, your amps don’t have a path to go through anymore,” Ferland explains.

When replacing a damaged wire portion, always connect both ends with quality heat shrink butt connectors, advises Russell. Forget about marettes – humidity traps, he says – or manual splicing with tape on top. A bad connection or small wire gauge will only add resistance and potential problems to an electrical circuit.

When troubleshooting an intermittent electrical problem, an amp clamp will give better results than poking a wire with a multimeter spike, which will only open the door to water, corrosion and unwanted resistance. Another good way to circumscribe and locate the problem zone would be to examine the OEM’s electrical diagram and then proceed by elimination, Fontaine suggests.

Russell estimates that “probably 85% of chassis-related problems – lighting and other – are related to chassis grounds.” So, ensure that all grounds you create have a perfect bare metal-to-metal connection. No form of rust, grease, or paint allowed. Once a good clean ground is in place, then it’s okay to protect it with a sealant.

Enamel paint can be a good option as it completely seals out oxygen, which eliminates the likelihood of corrosion, Russel underlines.

One thing that Ferland, Fontaine and Russell all agree on is that, in the lighting industry just like in any other, you get what you pay for. Often, the debate is not so much about LED vs. incandescent but poor-quality material vs. good components that will keep your truck on the road, generating revenue.