On Monday, I travelled to Hagerstown, Md., where Mack was celebrating the inauguration of a new axle line at its powertrain plant there. This was quite the party, with AC/DC blasting from the speakers at 10:30 in the morning and hundreds of employees invited to participate in the fun.

The event was attended by media, local and state dignitaries and Mack Trucks executives.

Up till now, Mack was outsourcing its own drive axles from American Axle Manufacturing. By bringing production in-house, Mack officials said they’ll be able to simplify the supply chain and shorten order lead times.

It also helps with integration. Mack is now producing all its engines, transmissions and drive axles at one facility, which also houses its engineers. The company can now design, test, machine and manufacture all its powertrain components in one place.

This inauguration was the culmination of a two-year plan, which involved an investment of $30 million and the addition of 100 good jobs. As far as I’m concerned, that’s a good enough reason to have a party!  You can read more about Mack’s decision to insource axle production here. 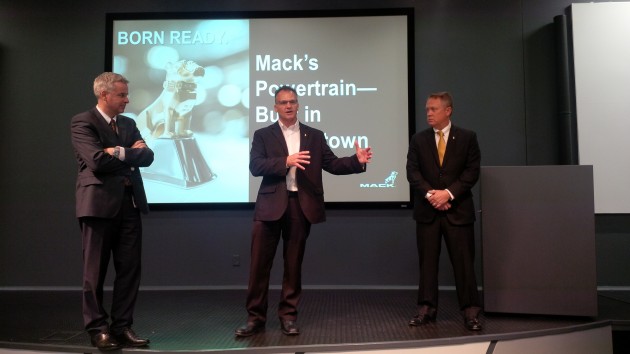