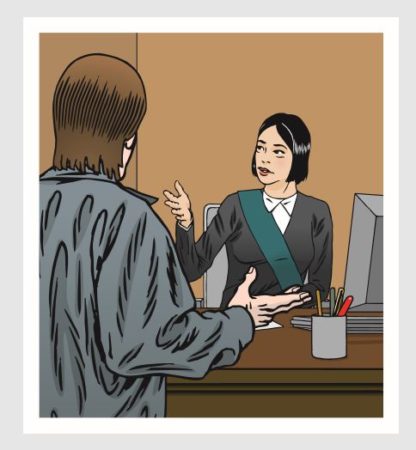 Mark was on his way back from a nice easy trip to Calgary where he’d been able to stay a couple of nights between loads, and take in a Calgary Flames home game and have one of the best steak dinners he’d had in a long, long time.

The ride was almost over as he passed through Barrie on his way into the Greater Toronto Area. From here there was a load to Montreal and then in three days, on the 10th, he’d be on his way to California with a sweetheart load and three days on the beach already booked and paid for.

But then his phone rang.

He was expecting it to be Bud, but instead of  Bud’s usual caller ID, it was a call from an Ontario government number.

“Hello,” said the voice on the other end. “Is this Mark?”

A pause, then, “Mark, my name is Ricardo Rivard, I’m a duty counsel lawyer here at the Davis Courthouse in Brampton.”

‘What the hell?’ Mark thought. ‘What do they think I did now,’ he wondered. “Okay,” he said slowly, unsure of what to make of the call.

“Do you know someone named Bud?”

Relief washed through Mark and he was tempted to say, “Bud who?” but this just seemed a bit too serious for those sorts of games. “Yes.”

“Well, Bud gave me your number and asked me to call and see if you would be willing to be his surety?”

‘Surety,’ Mark thought. That’s what people needed when they were in jail and needed someone’s help. If Bud wanted Mark to bail him out, he must be in some pretty serious trouble. Either that, or he’d done something really stupid. Mark figured it was likely a combination of the two. But regardless of the circumstances, Bud was Mark’s friend, and he was in a position to help him out.

“He does actually,” said the lawyer. “But his brother is out of town until the 10th. He’ll be back on that day, so you could be his surety for a few days, then pull your bail and let his brother would take over.”

Mark thought about it. “So, it’s just for three days?”

Mark said nothing as he thought about it further. He had a sweet load to California that was to be picked up on the 10th and a vacation scheduled after that which was not to be missed for any reason. But that was on the 10th. In the meantime, he had a nice easy run to Montreal to fill in the three days in between.

So, if he did help Bud out, all it would entail was basically having Bud tag along for the ride to Montreal, and then Mark’s responsibility would be over and done with. ‘Heck,’ Mark thought. ‘It might even be fun to spend some time with Bud.’

“Are you anywhere nearby?”

“Great. If you can get here before 4:30, I can ask the court to hold Bud’s matter down, or if you think you’ll be later than that, I can put the bail in place and you can just go to the Justice of the Peace office before it closes at 5 p.m. Your choice.”

“Let’s go with the second one, then. I should be there in plenty of time, probably by 3:30, but you never know.”

“Alright, I’ll get the bail in place.”

Mark arrives at the courthouse around 4 p.m., which was obviously late in the day judging by the number of empty parking spots there were scattered about the lot. Mark opted for a spot at the far end of the lot as Mother Load took up four full spaces and he wanted to have plenty of room to drive out of the lot when he was done.

After the long walk to the front entrance, he passed through the airport-like security and then got directions to the Justice of the Peace intake office.

After a short wait in a tiny room where Mark filled out a sort of questionnaire, Mark was allowed inside and escorted to an office with a Justice already seated behind a desk. It was an older Asian lady with short hair, glasses and dressed in a black robe with a wide green sash over one shoulder.

“You’re here for Bud?” she asked him.

“You know it’s a residential surety?” the JP said.

“What does that mean?”

“It means he’ll have to live with you for a while.” A pause. “Where do you live?”

She looked confused a moment, then said. “He’s going to have to stay with you.”

“I was planning on that.”

“And you’ll need to provide an address.”

“This is a bit unusual, but if you’re sure he’ll be staying with you, then I guess it should be fine.”

Mark waited as the papers were drawn up, and as he signed, the JP explained to him that if at any time he wanted to relieve himself from being Bud’s surety, he could do so at either a courthouse, or police station.

“You mean I have the power to pull the bail and put Bud in jail any time I want?

“Well, yes, but it’s usually only if he’s not following the rules.”

Mark liked the power this arrangement gave him over Bud. And to be honest, it was about time the tables were turned.

Mark sat in the lobby by the elevators for a half hour waiting for Bud to be released.

When Bud stepped out of the elevator, Mark got up to greet him without saying a word. They embraced a moment and Bud began to explain, but Mark cut him off. “I’m sure there’s a really interesting story here,” Mark said. “So, let’s hear it over dinner. You’re buying.”

Bud exhaled and pressed his lips together hard. Finally, he said, “Fair enough. Let’s get out of here.”