MISSISSAUGA, Ont. — After a 25-year military career leading some assignments of monumental importance, Douglas McGowan thought his transition into civilian life would be simple. He began his military career driving heavy vehicles and had piloted almost every type of vehicle possible while in uniform, often under challenging circumstances.

That’s why a career as a truck driver made sense to McGowan, but his optimism soon faded as resume after resume was ignored. After submitting 101 resumes – about 40 of which were for truck driving jobs – McGowan took a different approach. 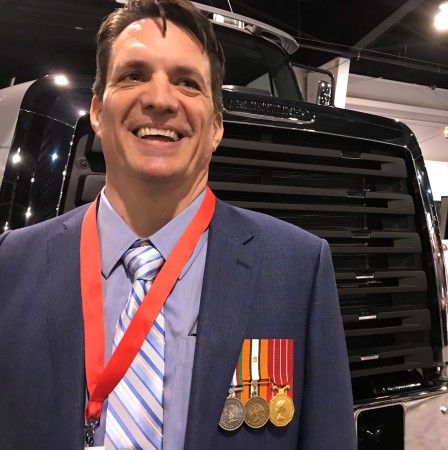 “I told myself I was going to stop at 101 resumes, and I stopped at 101 resumes and never got any jobs,” McGowan told Truck News in an interview. “With the training I had, running the people, having the highest level of security clearance you can get in the Canadian government, and I got nothing.”

McGowan took a more aggressive approach when he saw a marquee sign advertising trucking jobs for Can West – a Calgary, Alta.-based propane hauler.

“I went in and I applied with a totally clean resume and abstract, and I never got a call,” he recalled. “I went in again two weeks later because the sign was still up. I went in again after that, because they kept that damned sign up. I went back four times, and finally, I pretty much forced them to hire me because I wouldn’t go away.”

On April 21 in front of a large crowd at Truck World, McGowan was named the 2018 Highway Star of the Year. His truck driving career – like his military career before – has seen him progressively tackling more challenging jobs. At Can West, he hauled propane and then a picker truck. He then got his crane certificate. He spent a little time working in the office, but the call of the road was too difficult to ignore.

“I like the freedom of driving and of really being on the road and not having my phone ring,” he said.

He also liked the solitude and peacefulness of hauling propane into remote parts of Western Canada.

“I’m getting paid to go and drive into the (Rocky Mountain) foothills for the day, deliver some propane, and drive home. I would do this for free,” McGowan recalled.

When he decided it was time for a change three-and-a-half years ago, a trainer urged McGowan to get his dangerous goods certificate and apply to pull Super-Bs at Westcan Bulk Transport. The training culture there and focus on safety appealed to McGowan.

“They care about the people driving,” he said. “It was almost like the military. They wanted to make sure you understand and everything’s going to be safe. They took the time (for training) and I respected that.”

As per usual, McGowan soon found himself tasked with increasingly complicated jobs.

“I just seem to get these challenging jobs,” he said. “I didn’t really ask for them. I did ask to go to Norman Wells and drive from Fort Simpson. That is difficult driving. I liked the challenge of it. It reminded me of driving for the military again. The drivers up there are all excellent guys and really good drivers. When you get into that heavier stuff, you get that camaraderie that comes back that I’m used to with the military, where you just really rely on each other.”

McGowan brought with him a willingness to help others – and not just fellow drivers. Once on a run hauling propane, he offered to teach the enforcement officers at the scale the intricacies of the equipment he was running.

“He did a complete inspection on me,” McGowan recalled. “Then, getting to know him over the hour that he inspected me, we were talking and he said, ‘I do really well on the trucking stuff, but the dangerous goods, I don’t really know.’ I said, ‘Well, I can show you how the valves work and how the shutdowns work on the truck.’ I’m not looking to get anyone into trouble coming in behind me, but as far as I’m concerned, if somebody can’t shut their engine down and they’re hauling propane, you should catch them anyways, because that’s just unsafe.”

McGowan’s selflessness was on display at Truck World, where instead of talking about his own career achievements, his acceptance speech focused on the need to do a better job of reaching out to ex-military men and women for careers in the trucking industry. He said military veterans have many skills and attributes that make them good professional drivers.

“Your operational commitment to getting the job done,” he listed. “You can give them a task, they’ll complete the task. Their communication is excellent. They’re trained to communicate and they’re trained to self-start. I think there’s a lot of inherent training in the military that’s applicable to logistics and to driving.”

McGowan also disputes any notion that military veterans may not be interested in a trucking career.

“There needs to be education out there for people to go into the second career assistance program and to promote (trucking jobs),” he said. “Companies need to say, let’s have a rider program. Let’s have a ride-along program. Let’s show them what the job is like and what we do. You’re going to have more awareness on both sides.”

He said most people still think of trucking requiring long days and extended stretches away from home, which isn’t always the case. Asked why trucking does such a poor job attracting military veterans, McGowan said he believes there’s a stigma in Canada against veterans.

“There’s some sort of prejudice against hiring ex-military people, because I think there’s a misunderstanding about their capability, about stability, about maybe trying to take over a situation or maybe being too aggressive,” he said.

In the U.S., by contrast, there’s been a concerted effort by trucking employers to reach out to military veterans as they transition back into civilian life.

The Highway Star of the Year Award is sponsored by Freightliner, Eberspaecher, and OBAC. The winner receives $10,000, travel to Truck World and accommodations for two, a computer tablet, a one-year OBAC membership, and special-edition leather jacket.