TORONTO, Ont. — “Be your own boss,” says the recruitment ad from an Ontario carrier.

An irresistible offer, one would think, but an expert warns: not so fast. As the longtime executive director of the Owner-Operator’s Business Association of Canada (OBAC), Joanne Ritchie has been handling key issues affecting the sector for years.

“We are dealing with decades of bad custom and practice. Carriers have been complicit in this… in taking good drivers and turning them into bad owner-operators,” she told Truck News in an interview.

So, how does that happen? Some drivers fall for the “Hey, you can own that truck” offer from the carriers without realizing what is in store for them in the months and years ahead, Ritchie said.

A key problem is the lack of good business sense.

“One of the big mistakes a lot of owner-operators make is not paying themselves. Not understanding that they’re an employee, and that they have to make a living.”

There are no reliable statistics on the number of owner-operators in Canada, with estimates ranging from anywhere between 35,000 and 60,000. The fact that there is no real definition of an owner-operator complicates the matter.

What is clear, however, is that the industry is ready to hire thousands more, and all the recruitment ads point to a red-hot market.

Ritchie’s advice to wannabe owner-operators: Look for a company that will treat you as a business partner. 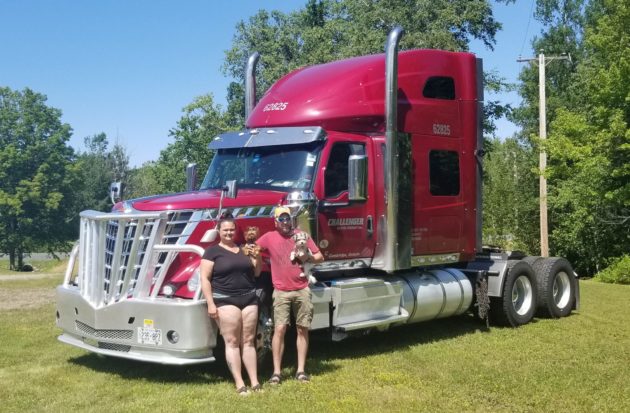 Solange Gallant, 35, and Rene Arseneau, 38, have found such a company, and are quite happy about their choice.

The New Brunswick couple have been driving for Challenger Motor Freight for a little over eight years.

They previously worked for a carrier in Nova Scotia.

“I have never been without him in the truck,” Gallant said of her husband, who was sleeping in the cab after his night shift.

Gallant spoke to Truck News as she pulled into the Headingley Truck Stop near Winnipeg, Man.

“It’s all down to how much money we can make. Challenger has been great with us. That is why we’re still here, and not really planning to leave.”

She said she had nothing to complain about, and at Challenger, team drivers are even paid wait times.

Gallant and Arseneau are on the road for almost 2.5 months before they take a break and go home to Petit-Rocher, N.B. They don’t have any children, but their dogs Lily and Luna always accompany them.

They are open-board drivers solely focused on accumulating as many miles as they can.

Asked whether they were workaholics, Gallant replied: “No, moneyholics.”

Another owner-operator brimming with confidence is Anil Raveendran.

The 57-year-old has been working for CEVA Logistics for the past 10 years.

He owns five trucks, four of the them leased to another carrier and operated by his eight employees.

He is content with his job because he feels he is well-treated and respected by the carrier.

Raveendran is happy with the arrangements he has with the two carriers. The main benefits he looks forward to in choosing a fleet are the pay package, fuel deal, insurance coverage, regular work and most crucially, dedicated routes.

“All my trucks run the same routes all the time.”

A longtime owner-operator, the Port Dover, Ont., resident says the business model has its ups and downs.

Like others, Barron also has concerns about high fuel prices and low rates, but what worries him most is the proliferation of poorly trained drivers on the highways.

Another issue, he said, is the lack of safe, adequate parking, a problem OBAC’s Ritchie said has worsened over the past few years.

One person who believes owner-operators are being taken for a ride is Mike Shree.

Shree, 54, has been in the business for just three years, but he is not happy with the way owner-operators are treated by the carriers.

“They don’t get respect,” he said. “Initially everyone talks nicely, and you won’t know the truth until something happens.”

He cited a long list of grievances such as alleged driver harassment, unpaid wait times, lack of transparency in processing insurance claims and surprise mileage deductions.

He is convinced that he will never be able to grow his business by driving for another company.

“You will make the company rich and just sustain your living while taking all the blame.”

Shree has three trucks, but hopes to have a fleet of his own soon.

“Then I will clean up the mess in this industry, and show them (the carriers) how to treat people respectfully.”

That is not an easy task, considering the number and types of players in the market.

Ritchie called Shree’s complaints “not an uncommon story,” but she said there was absolutely no reason why frustrated people like him have to stay in that situation.

“With today’s market, somebody who has a good record won’t have any trouble in getting a decent carrier.”

Going independent is a whole different thing, though, Ritchie said. Those who want to do that must first make sure they have some customers lined up, she warned.