BELLEVILLE, Ont. — Having a personal touch with customers is just one of the keys to success for Ontario’s Cooney Group.

The Cooney trucking legacy started 73 years ago in 1945 when Chuck Cooney bought his first used truck at just 16 years of age. Cooney was born and raised on a farm in Stirling, Ont., with his nine siblings, and wanted to do something that wasn’t on the farm. So, he bought a truck and eventually would cut and sell lumber to farmers. Then one truck turned into two, and two turned into four, and so on. 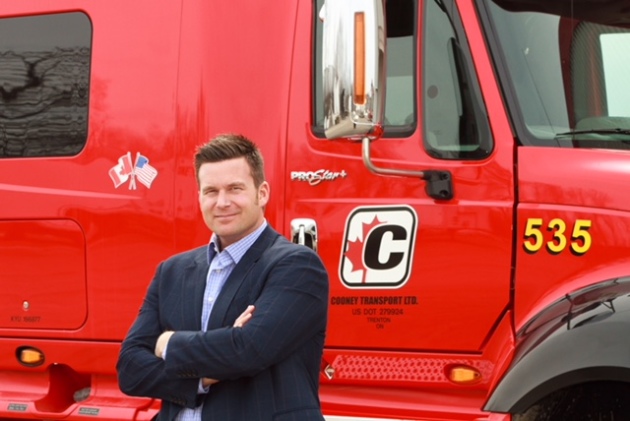 Cooney got his first major break in 1957 when he won a contract with Canada Cement (known today as Lafarge) to transport bags of cement for the St. Lawrence Seaway wall. Today, Lafarge is still Cooney’s longest-standing customer and is one of the largest customers that is still doing business with them today.

Cooney’s son Gary would eventually take over the business in 1986, after the elder Cooney’s death at just 58 years old. Today, while Gary is still involved in the family business, his son, Adam, the executive vice-president, is mostly running the day-to-day operations.

Cooney is headquartered in Belleville, Ont., and boasts 150 trucks and 500 trailers. It has seven terminals along Hwy. 401 in Brantford, Toronto, Trenton, Belleville, Kingston, Ottawa and Montreal.

“We haul dry goods,” Adam Cooney told Truck News. “A lot of paper and hygiene products, while at the same time, our other divisions haul steel, lumber, and construction materials. Our tank division hauls cement materials. Thirty per cent of the business hauls to the U.S. and 70% is within Ontario and Quebec.”

Other than its shiny red trucks, Cooney stands out from the competition by having exemplary customer service, Cooney said.

“I think one of our biggest strengths is because we’re family owned and operated at such a large size, we have an amazing ability to react quickly to our customers’ needs,” he said. “I think other companies may boast that, but I think it’s very hard to do unless people who are making the decisions can make the decisions in real time. And we do that here. As an example, we have a lot of long-term customers, where we have good personal relationships with them. The head traffic guy at Lafarge in Montreal…he’ll text my cellphone with a new business opportunity and it’s not that he can’t go to dispatch, but he goes directly to me because he knows he’ll get a quick, direct answer. He doesn’t have to go through a committee and wait four days for an answer. So, we pride ourselves on being reactive and having a personal touch with our customer base.”

Like almost every trucking company in North America, Cooney said he is feeling the pinch of the driver shortage.

“Attracting qualified drivers is getting harder and harder to do,” he said. “And I feel like no matter how much money we throw at advertising or bonuses or other incentives, it’s just not helping. The driver shortage is affecting us right now. We have unseated trucks that we can’t fill and business that we are turning down because we don’t have enough drivers to help us.”

Thankfully, turnover at Cooney is low, so Cooney said he is thankful the drivers he does have are sticking around.

“We’ve never had high turnover,” he said. “And we have virtually no quick turnover, or no one leaving before 90 days.”

Cooney added that what helps keep turnover low is a combination of things that Cooney is doing.

First, thanks to its diverse terminal network, almost two-thirds of its drivers are home every night or every other night.

“And that’s a big thing for drivers these days,” he said. “They want that home time.”

Cooney added that drivers also like to drive new, clean equipment, so that helps keep drivers on longer.

“I also think being in rural areas like Belleville helps,” he said. “Because our guys tend to be more conservatively rooted, so they’re not moving from job to job a lot.”

Not all of Cooney’s trucks are fitted with electronic logging devices (ELDs) just yet, however, Cooney said he is a supporter of them because it levels the playing field for all fleets.

“A guy running two or three trucks out of his basement now has to comply with the same rules I do,” he said. “And I think that’s the way it should be.”

Looking towards the future, Cooney said he hopes to grow the business in a niche way.

“Anybody can go and buy a van and haul diapers from A to B, but that’s not where we consider or see the company growing,” he said. “Growth will come from speciality products. I’m in negotiations with Lafarge right now to take on new business in a sector of Ontario I don’t do. Opportunity is there for us. We just have to take it.