When the EPA SmartWay program began verifying the rolling resistance of commercial truck tires, it seemed simple. Look for the SmartWay decal and be assured of good fuel economy.

Today, however, there’s a wide-ranging smorgasbord of tires on the SmartWay menu, ranging in quality from filet mignon to hot dog wiener. Tier one manufacturers have made the list, of course, with a wide assortment of steer, drive and trailer tires. But they’ve been joined by others you may not suspect, or even have heard of. In fact, at press time there were 150 tire manufacturers with a SmartWay-verified tire on the market.

So how does a buyer sort through the clutter and find a quality tire that will provide excellent fuel economy in addition to acceptable traction and wear life? And does a SmartWay verification speak to the quality of the tire’s overall performance?

The answer to that last question is a resounding ‘no.’ SmartWay measures the rolling resistance of a tire, but no other performance characteristics.

“It’s not that hard to make a SmartWay tire, honestly,” said Matt Loos, director of TBR marketing for Bridgestone Commercial. “The criteria for achieving SmartWay is based purely on calculated rolling resistance coefficient. There’s this bar, and if you get under the bar, whether it’s by a little or a lot, you’re SmartWay.”

Theoretically, a tire manufacturer could submit data for a tire that looks like a racing slick and offers no traction, and still get on the list. Brian Buckham, general manager of commercial marketing with Goodyear, said a manufacturer could produce a tire with a thinner tread to achieve SmartWay certification but the end user would lose out on wear life and traction.

“When you’re only trying to hit one of the performance (characteristics), hitting rolling resistance is not that hard,” agreed Paul Crehan, Michelin’s director of product marketing for North America. “It’s what you do with the rest of it that becomes the key to separating between the very good, the good and the not so good. There is no link between SmartWay and good.”

The SmartWay program isn’t perfect, and it’s not likely to change significantly until at least 2018, according to Crehan, since the funding required to overhaul the program would first have to be approved by Congress.

“What we have today is the way it’s going to be for at least a five-year period,” he said.

This means fleets and owner/operators will have to be discerning when choosing a SmartWay-verified tire from among the list of hundreds.

“We have to be careful,” said Loos. “SmartWay is not synonymous with a good tire or a fuel-efficient tire. There’s more than just having ‘SmartWay-certified’ on the side of the tire.”

Reducing rolling resistance itself can contribute to greater fuel economy, but there are always trade-offs, especially as it relates to traction and tread wear. The trick is to find a tire that strikes the required balance between these three performance traits. Every fleet’s priorities will be different, Crehan acknowledged.

“What fleets need to do is say to themselves, ‘What are our key success factors? What makes our company successful and what type of tire do we typically purchase?’ It comes back to, what is your operating philosophy in terms of cost? Are they looking for the lowest initial cost or are they looking for the lowest operating cost, or something in between?” Crehan explained.

Loos agreed. “It can’t have the best traction, the best tread wear, the best fuel economy and also be the cheapest,” he reasoned. 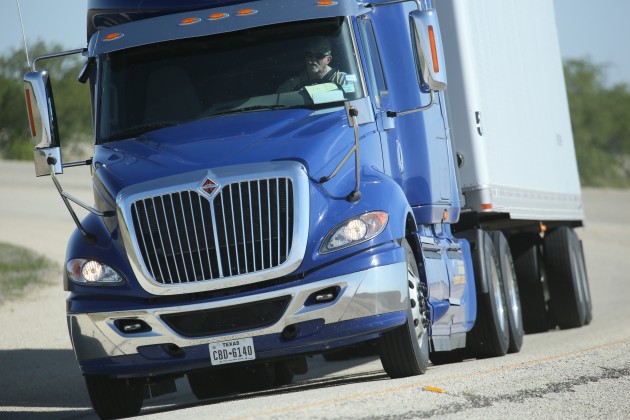 One of the SmartWay program’s flaws is that the rolling resistance requirements have not been updated as tire design has improved. This means even when it comes to rolling resistance – the one variable SmartWay monitors – there’s a significant performance variance among the approved tires. Some manufacturers now break down their own SmartWay tires into sub-categories.

“We have a tire that meets the SmartWay limit for drive tires, but we have another drive tire that we internally call ‘Super SmartWay’ because it’s significantly lower than the limit,” said Goodyear’s Buckham, adding there is about a 15% variance in rolling resistance between the two.

“I think you’ll see a day in the not-too-distant future where you may see a score alongside the tire,” suggested Loos. “Right now, they’re just all passing underneath that limbo bar and everyone gets the same grade.”

This isn’t to say the SmartWay tire program has been a wasted effort. Tire manufacturers we spoke to said the program has benefited the industry by raising awareness of the importance of rolling resistance and fuel economy.

“We’ve been saying fuel efficiency and rolling resistance is important for decades,” said Michelin’s Crehan. “That message is something we’ve been promoting for a very long time. Now, we don’t have to do it anymore because the government – a third party – is saying it for us in a very authoritative way.”

The SmartWay tire program itself does not seem to have lost any traction, as evidenced by the growing list of verified products. It has even expanded to include retreads, which has brought forth some fresh challenges. The impact casing design has on rolling resistance cannot be underestimated and to remove this variable from the equation, SmartWay adopted a Yokohama casing to be used as the benchmark for all SmartWay testing.

This eliminates the risk of tire manufacturers affixing a not-so-good tread onto a good casing and reaching the SmartWay threshold with a badly designed tread on the merits of someone else’s casing.

The list of SmartWay-verified retreads is much shorter, but growing, as more manufacturers undergo the testing protocol. That in itself is a process. Manufacturers must submit three tires from any line they’re looking to have SmartWay-verified to a third-party testing organization. The data is then submitted to SmartWay, which verifies the information and then grants its approval.

“It’s specific to a dimension in size,” explained Crehan. “So if you change something, you need to go back and re-certify. If you make a change in production that’s significant for rolling resistance, you need to re-test.”

Since not all SmartWay tires are created equal, has selecting a tire become any less complicated since the arrival of SmartWay? Probably not. A buyer still must consider a long list of variables and prioritize the various performance attributes, not the least of which is cost, both at the outset and over the life of the tire.

Most large fleets have sophisticated tire programs and have conducted extensive comparison tests. This is trickier for small fleets and owner/operators, who simply don’t have the resources to conduct their own testing. The premium tire manufacturers have tire cost calculators that can be used to compare the various tires on the market, which serve as a great tool for small fleets and O/Os.

“If you’re an owner/operator, you can’t afford to go buy six different tires and test them on the two trucks that you have,” acknowledged Loos.

Goodyear’s Buckham recommends the tire calculators offered by the so-called Big Three manufacturers and dismissed any notion that there’s a bias built into these calculators that would render them untrustworthy.

“Every number and comparison we report in our fuel calculator is third-party testing correlated,” he explained. “We have correlations with the two independent test labs that the EPA cites in their SmartWay program, so every number that we report in the calculator is a third-party correlated number. I would assume Michelin and Bridgestone are doing the same. We’re all big companies and our reputations are at stake.”

When it comes to some of the lesser-known manufacturers, however, Buckham agreed some skepticism may be warranted.

“Are they reporting a raw number off their machine or are they doing a third-party (validation)?” he wondered. It’s a good question to pose to a tire company when they present their data.

No tire article would be complete without a mention of inflation pressures. Low rolling resistance tires are no more or less susceptible to air loss, but they require the same vigilant attention as any other tire when it comes to monitoring inflation pressures.

Not only will running proper inflation pressures protect the casing and ensure greater retreadability, it will also reduce failures and improve fuel economy. Ignoring tire pressures can negate any fuel economy gains a low rolling resistance tire can offer.

“If you lose air, your rolling resistance goes up and you use more fuel,” cautioned Buckham.

Low rolling resistance tires do tend to run cooler, he added, which can help preserve the casing for multiple retreads.