In-cab cameras: Lawyers love’em. Insurance companies love’em. Fleet managers love’em. But drivers remain very much divided on the technology, which some see as a shield and others as a sword.

Still, more fleets are installing some form of video technology that can be used to train drivers and also to determine exactly what happened when a truck has been involved in a wreck. The insurance industry is encouraged by the trend. 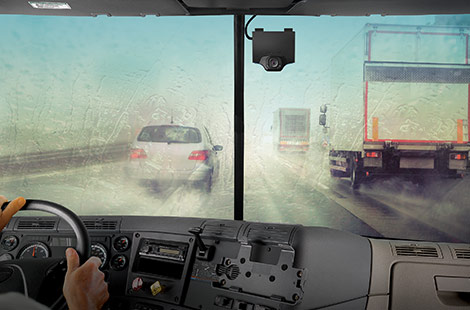 “We don’t espouse that our customers have to use it, but when we do an assessment of a particular account we want to provide coverage for, if they have taken the added step and installed (video) technology, we definitely take notice,” said Angelique Magi, vice-president of transportation and strategic initiatives with The Guarantee. “Through our assessment process we look at what they have actually done as far as technology and added safety benefits within their fleets and their equipment and that factors into our overall pricing. It isn’t a hard discount but it definitely plays into our overall calculations of their premiums.”

“I think everybody should get dash cams,” he recently told an audience of trucking company managers at Northbridge Insurance’s Full Circle Customer Appreciation Day. “We have gotten out of so many cases because of dash cams. They are phenomenal devices.”

But what about when the truck driver was at fault? Even then, insurance companies and lawyers prefer to have access to video so they know the facts surrounding the incident.

“I think it’s good to get out ahead of any unfortunate catastrophic loss to be able to know right away what the situation is,” Magi said. “Then you can make the determination as to how you’re going to move forward with the claim. That’s to everyone’s benefit. Having the information and video up-front to know where you stand is the most important piece.”

But fleets looking to install in-cab video cameras can likely count on some minor uprisings among the driving force – even though video in most cases exonerates the professional driver. It’s widely accepted that about 75% of truck-car crashes are the fault of the motorist, not the truck driver.

Erb Transport is one company that’s in the process of installing cameras in all of its vehicles. It will install 800 in-cab cameras over a three-year period. For Tom Boehler, director of safety at Erb, it was about identifying risky driving behavior and intervening with training when necessary.

“We’re at that 1,000 driver mark and, how do you manage drivers and correct behaviors?” he wondered. “The insurance companies say we have to do a drive-along but if we do one once a year, drivers are on their best behavior for the day, so what did that really accomplish? We need to see them in their natural state.”

Erb is using the cameras for educational purposes. It opted for the DriveCam system from Lytx. Boehler stresses he’s not watching drivers inside their cab and the DriveCam platform doesn’t even allow that. It runs on a continuous two-minute loop, deleting footage as it goes until an event triggers a report. When that happens, video of the event is captured and sent to a Lytx facility where it’s analyzed and then advanced to the fleet for further action. Erb has a team of coaches who then review the video and discuss the event with the driver.

“We notify the driver and say there’s a coaching event we need to go over, bring them in, play the video for them. A lot of times they see it again and say ‘Yeah, I should’ve been looking further ahead or I should’ve had my seatbelt on’,” Boehler explains.

Erb measures the effectiveness of its coaching by examining how often drivers have a re-occurrence of the behavior that triggered the
report.

It is averaging a rate of 70% interventions without a re-occurrence, with some coaches averaging 90-100% effectiveness. Based on this, Boehler feels the investment in the cameras pays for itself within four months of any year.

The cameras have also exonerated drivers from blame following an accident, including truck drivers from other companies. One camera-equipped Erb truck was following another tractor-trailer near Trenton, Ont. when an SUV wandered into the truck’s lane and struck its trailer tires. The Erb driver manually activated the camera and was able to show it to police who discovered the SUV driver’s account of the event was inaccurate.

“A lot of our owner-operators run GoPros all the time,” Boehler said. “It has been very beneficial.”

But not all drivers are comfortable with cameras in their cab. Boehler admitted a couple drivers left the company, but not many. Erb uses cameras that are both forward- and driver-facing. It began the rollout with a 40-truck pilot project. Drivers involved in the pilot supported the broader rollout, but looking back, Boehler says the rollout could’ve been better implemented.

“Before going from the pilot to committing to it, we maybe should have put a program together and had an open information session to get those (pilot) drivers in those meetings to talk about it and get more feedback from the drivers,” Boehler admits. “Just getting more of the message out before committing to it.”

Gorski Bulk Transport is another carrier that has been among the early adopters of in-cab video. Gorski uses the PeopleNet platform, but unlike Erb, company president Ted Gorski Jr. opted for forward-facing cameras only.

“We chose to not add the inward 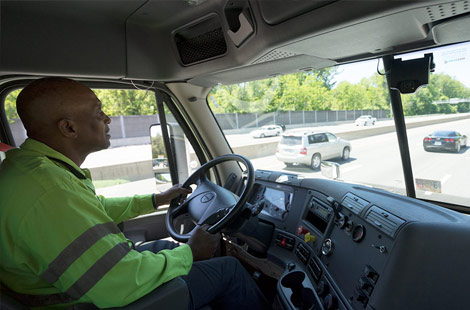 -facing cameras,” Gorski said. “We felt that was a privacy issue we didn’t want to address. We felt it was not a necessary step; it was more important that we see things through our drivers’ eyes.”

Gorski opted to install cameras in its trucks after one of its drivers brought forward video from an accident scene he had captured with his own dash cam. It showed the other vehicle was at fault even though the motorist pinned the blame on the truck driver.

“We brought this to our driver safety meeting and asked if they’d support something like this and the support (for video) was overwhelming,” Gorski recalled.

“All too often in a situation where a big truck and small car are involved it’s the small car that has the most sympathy and in many cases the truck driver has done everything right and has no support,” Gorski added. “The video log allows you to prove it.”

The cameras also allow Gorski to find out about and celebrate its drivers’ accomplishments. For example, one driver recorded a close call in which his head’s up driving prevented a crash and the video was shown at a safety meeting in which best practices were shared.

“It’s not used as a punitive tool,” Gorski stressed. “It’s used for coaching, to support our drivers and to understand what is happening.”

Both Erb and Gorski have encountered instances in which Customs officers have been sensitive about cameras rolling at border crossings. Both companies provide lens covers so the cameras can be covered up at the border. While Boehler feels Erb gets a payback four months into the year, Gorski said it’s difficult to measure a return on investment, but that it isn’t necessarily about the money.

“The ROI, it’s not like improving fuel economy, reducing tire wear or preserving a non-renewable resource,” he explained. “To me the ROI is very different. It’s about promoting safety, about reducing driver turnover, it’s about supporting drivers to be the professionals they are in the workplace and giving them the tools they need to be successful.”

“Having the DVRs in the cab is something that just raises that level of professionalism one step further and says very clearly to our drivers that we are 100% behind them in the workplace,” Gorski added. “And if I see an incident where a driver has demonstrated safety in the workplace by preventing an accident or if there is an incident where the video exonerates the driver, that to me is payback right there. I don’t know how you can put a price tag on that.”