GUELPH, Ont. — For some, the road to success is a winding one. For others, it’s one that’s straight and narrow. 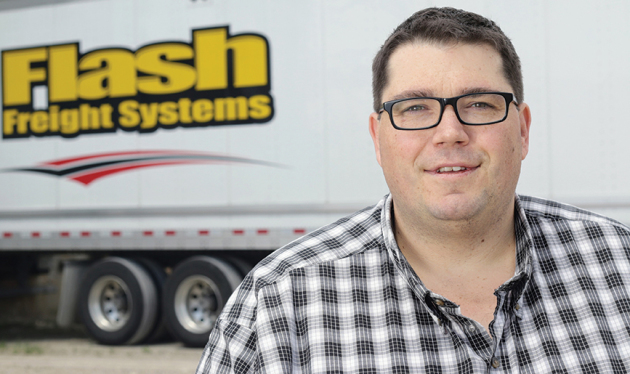 The business was started in 1998 as a part of Spruce Brook Farms – a supplier of agricultural commodities and ingredients. In 2004, the Gerber family, who had been in the transportation industry for years, purchased Flash Freight.

“Not ridiculous, rapid growth,” Tony Gerber said of Flash Freight. “But consistent, sustainable growth, which has really become kind of our mantra here.”
Flash Freight, unsurprisingly, is still tied to its roots, and hauls agricultural products across the continental U.S., as well as Canada. It also hauls pet food and pet supplies as well as office furniture.

“It took us 10 years to tweak that mix, but we are happy with where we’ve landed,” Gerber said. “It’s a freight mix that has eliminated seasonality for us, which is good all around.”

As far as drivers go, Gerber said all Flash Freight drivers are company drivers, and are paid as employees, not contractors.

“We are not fans of the Driver Inc. model at all,” he adds.

Most of Flash Freight’s drivers have been with the company for almost a decade and its turnover rate is lower than 20%. And this is for a variety of reasons, according to Gerber.

“I think overall, why our drivers stay, is the same reason why our customer turnover is low as well,” he said. “It’s our focus on accountability, integrity and service.

Our pay package is extremely competitive. We offer a good mix of miles and home time, which is one of the holy grails in trucking. Our goal is to ensure our drivers utilize the maximum amount of hours available and can still have resets at home with their family. We are not a trucking company that expects our drivers to be out for three to four weeks at a time.”

The other thing Gerber hears often from drivers is that they appreciate the honesty that Flash Freight expresses throughout a driver’s tenure with the company.

“We always do what we say we’re going to do,” he said. “And there’s no change from recruitment to qualification, to the first trip, to the 10th year. There’s not a lot of smoke and mirrors here. We are pretty realistic about the negative things that happen in the industry.”

The company also makes sure its drivers have a pain-free experience when crossing the U.S.-Canada border.

“We are on the national carriers list for a number of brokers, and we work hard to make sure we are proactive in making sure by the time the driver reaches the border, the shipment has already cleared,” he said. “We don’t ask the driver to handle any clearances themselves.”

As for its success, the company wouldn’t be where it is today, Gerber says, if it wasn’t for Flash Freight’s people, and their “commitment to our vision of service excellence.”

“And it’s not just our drivers I’m talking about,” he said. “It’s our operations staff, administrative staff, and warehouse staff, too.”

He recalls one time when a customer, a large food distributor, ran into some problems in 2008. The company was switching warehouse facilities and ran a few days behind schedule.

“At this point, we were using almost 25 trucks per day for them,” he said. “And as soon as we heard about the problem, our operations staff left the office, moved their computers and desks to the customer’s warehouse and spent the next week and a half making sure there were no barriers to communication or barriers to keep our drivers moving. Ultimately, our people knew there was a problem, jumped in and said ‘We won’t leave until it’s fixed.’”

But its not all rosy at Flash Freight. It still has challenges, like every other carrier out there. For Flash Freight, Gerber says the biggest challenge it deals with today in the industry is low barriers to entry.

He also said that while the company isn’t feeling the full effect of the driver shortage yet, he is starting to see the impact.

“With our low turnover rate, we don’t feel the shortage quite as acutely,” he said. “What we’re seeing now is a lower availability of higher quality drivers. We used to be fully seated and today we’re not. And of course, we’re not looking at a large number of trucks parked up against the fence, but we can tell there’s a shift. And I think it’s mainly to do with the demographic of typical drivers, who are all starting to retire now.”

In the future, Gerber said his one hope, which normally raises a few eyebrows, is to “not be on the Top 100 list.”

“Because truthfully, I believe one of the things that I think has helped us build our success is the fact that we are genuinely a small family business,” he explained.

“So, my hope for the future is to have that same, consistent, solid growth, organically. And to get it more in a manner that enables us to deliver a higher quality of life for our employees, rather than growth for the sake of growth.”