TROIS-RIVIÈRES, Que. — Not just anyone can take a 57-meter long wind turbine blade through a turn, or squeak an 8-meter by 6-meter high, 225-ton load through a small town.

“There are a lot of drivers who want to do oversize/overweight hauling, but finding a calm driver with the right skills is really a challenge,” says Renaud Labbé, health and safety coordinator with Trois-Rivières-based Transport Bellemare International.

If the good pay, the challenges, the dangers, the complexities, and having to be on the ball 100% of the time sound attractive, becoming a super driver might make the perfect career move. 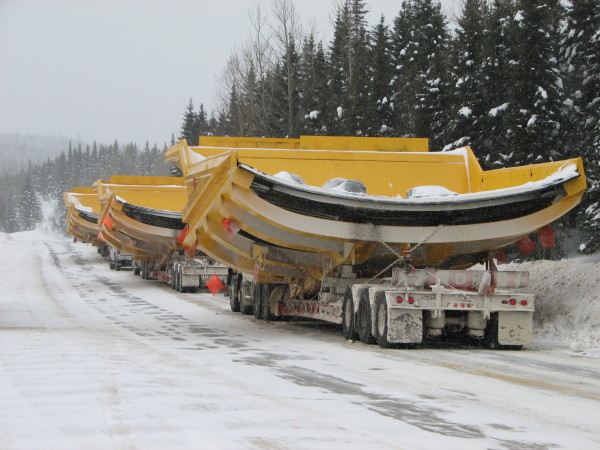 Some prospective drivers come straight out of school and serve an apprenticeship lasting up to two years. Others apply with as much as a decade or two of driving on their dossier. But no matter their background, they face serious training, especially for transporting super loads, which are oversized in all dimensions, weight and tractor-trailer configurations.

“We might start internship drivers – a driver straight out of school – with no weight (legal weight, that is) and, say, nine feet wide. Some drivers apply with 10-15 years of experience, but have never driven oversize. We still need to train them. It could take one to two years before they are totally compliant,” says Dave Trodéchaud, wind planner, Transport Bellemare International.

Experienced drivers will start hauling oversize loads sooner, but even they will spend a few days with Labbé, learn about the laws, tie-downs, the client’s ways of doing things, hours-of-service, and how to use the special equipment, like boosters – short trailers added onto already long trailers.

“We had a driver (who had done) oversize work in British Columbia, but had never done a booster, or a long, heavy load. Even if the driver has 15 years, we train him with the booster,” Labbé says. “Even if a driver has had 15 years in oversize, our trainers will get in the trucks with them to see what they can handle.”

A driver new to the world of oversize loads will begin with a lot of classroom training, including mastering Quebec’s intricate system of permits. Beyond Class 1, which covers loads with the standard legal weights and maximum dimensions less than five meters wide and high, are six more Classes. As each variable – weight, dimension, trailer configuration and length – exceeds normal limits, the Class number climbs. Super load status – Class 6 plus 7, reflects a mix of overweight, overdimension, and unusual configurations like three-axle truck plus three-axle jeep plus three-axle trailer, and maybe even a three-axle booster bringing up the rear.

And if that already sounds like a study headache, just wait: the definitions of oversize loads change from province to province and state to state.

“There is no consistency in the regulations,” Trodéchaud says. On the plus side, he notes, “Once you understand Quebec permits, everything else is easy.”

Drivers must master the delicate art of correctly placing massive loads on the trailers; even an inch too far fore or aft can spell trouble. In a similar vein, drivers must learn how to evenly distribute a cargo’s weight between the booster and trailer.

“When the driver goes to the client, he has all the weight and dimension information. He needs to be able to assemble the trailer and help the shipper place the cargo in the right place,” Labbé says.

Shimming, which puts trailer components on the same plane, is another technique that drivers are taught to evenly distribute cargo weight.

“For heights over 14 feet, drivers get special training, working with the height pole, and how to build and install the runners that are put over the cargo so wires will slip over the cargo.”

On the road, drivers must know how to communicate and work smoothly with the pilot cars, obey city and state curfews, and negotiate fueling stations with low roofs that force them to deflate their suspension so they can ease underneath.

Sharing tips with other drivers is another aspect of the teamwork that is a crucial part of transporting of project cargo.

“The drivers need to talk with one another. A driver may tell another driver ‘There, go two feet more to the left’,” Labbé says.

Even those who have qualified to handle oversize loads have varying comfort levels.

The most critical attribute of a super load driver is steady nerves. “It is easy to see if a driver gets nervous. One of the best skills a driver must have is calm,” Labbé says.