Trucking is a very visual industry – for those who choose to make it so. While there are some trailers that roll down the road as a giant blank white canvas, there are others that act as rolling billboards for their respective companies. 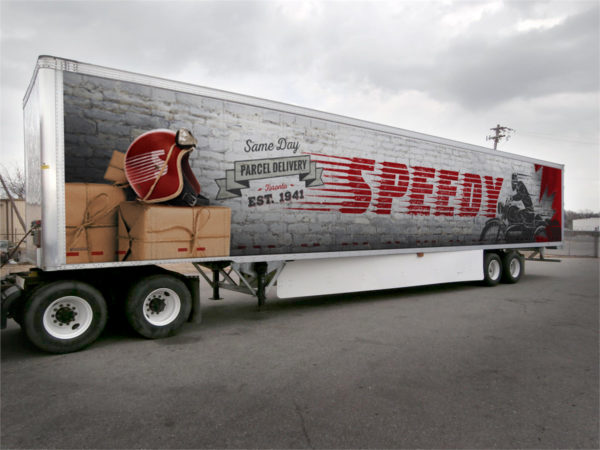 Fleet graphics have come a long way with the advancement of technology. Gone are the days where graphics were painted on the trailer or could only showcase basic logos. Today, digital imaging has changed the game and fleets can design and place a visually stimulating image on their trailer to grab the attention of potential consumers on the road. Fleet graphics have become such an artform, that the Private Motor Truck Council of Canada (PMTC) even distributes awards for the best looking fleets on the highway every year at its annual convention.

So it’s no wonder more fleets are getting the message that trailer graphics are worth the investment and are wrapping their fleets accordingly. We spoke with a trailer graphics sales specialist and a fleet that believes in advertising via fleet graphics to understand why this is a medium more fleets should be taking advantage of.

Safety
While some fleets are concerned that putting a giant label on their trailer could attract thieves, Andy Walker, Ontario distribution manager for Molson Coors Canada, says he believes wrapping the trailer actually has the opposite effect.

“One trend we’re noticing is that a lot of fleets are now asking for reflective graphics,” she said.

Reflective graphics allow trailers to be visible for 24 hours a day, so even when it’s dark at night, companies can be assured not only are motorists seeing their trailer’s logo and brand image, but the actual trailer itself, which helps increase safety.

“The more reflective it is, the safer it is,” Walker added. “Plus it’s also nice to see the visual pop out at night because now when the trucks are driving at night, our brand and message is still out there for the consumer.”

Cost
Surprisingly, wrapping your trailer is quite cost-effective, said Morrison.

“Fleet wrapping is by far the most cost-effective medium out there from a marketing perspective when you think about cost per impression,” she said. “It’s a broad-reaching medium, especially if your target market is adults between the ages of 18-54. Fleet graphics really allow you to take your message right to the customer.”

Essentially, fleet graphics can pay for themselves, Morrison said, when you consider how many eyes are on the trailers every day.

“Grocery stores love to use fleet graphics because people on the road coming home from work at the end of the day are wondering what they’re going to make for dinner, and then they see a big Loblaws trailer with dinner printed right there for them,” she said.

Walker added the investment in trailer graphics is worth it because of how long some of the films last.

“It’s such a big bang for your buck,” he said. “The amount of people that see it is way more than a parked billboard, and we keep them on for at least five years at a time.”

Morrison said that while some fleets may choose to change their graphics every five years, some materials like 3M products can last up to 10 years.

“But there are short-term film options,” she added. “So, for example, Pepsi has their entire fleet wrapped in permanent long-term graphics, but for summer they had a promotion happening so we applied a temporary film over top of their back door to help them get their message across without re-wrapping the entire fleet again.”

Drivers
Fleet graphics also have the added bonus of making the driver feel more confident about their career, Morrison said.

“We hear from fleets sometimes that their graphics fill their drivers with a sense of pride,” she said. “Many of our customers continue to use fleet graphics as another way to ensure driver retention and satisfaction.”

Bigger is better
If you decide to take the leap and invest in trailer graphics, Morrison said it’s important to keep in mind how trailers are seen on a daily basis by the consumer.

So, when thinking about design, think big.

“There is a major shift towards digital imaging and large, lifestyle graphics,” she said. “You have to remember and consider that the trailer is running down the highway at 100 km/h, so a bunch of tiny images or too much or too small text on the trailer isn’t going to do much. A big provocative image, however, will really make an impression on the consumer. That’s one of the biggest trends we’ve seen over the last few years – overall graphics are getting a lot bigger.”

At Turbo Images, the company will work with a fleet from the beginning of the design process right up to installation.

“But sometimes we have customers who already have a design in mind, so we will work with them to make sure it’s the best design for their brand,” Morrison said. “So when thinking about wrapping your fleet, remember it’s not a detailed medium, so it’s not one where you’d use fine print, but if you’re looking for brand recognition or visual reinforcements, it’s a great medium to employ.”