MISSISSAUGA, Ont. — When you can’t get a job in aircraft engineering, why not start your own trucking business?

That’s the beginning of the success story of the Apps Transport Group.

After graduating college in aircraft engineering, Robert McDonald couldn’t find a job, so in 1985 he decided to try something else. 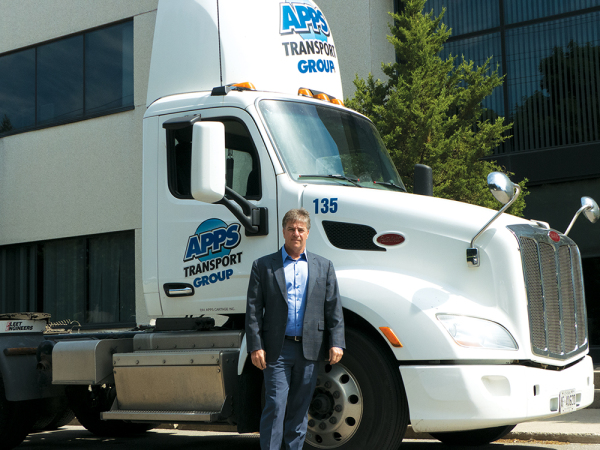 “I decided to get a truck driving licence just to make some money,” he recalled. “And then I started doing my executive MBA at York at night and driving during the day. Then an opportunity came along with somebody who was selling his local cartage licence and his provincial regional licence, so a friend and I decided it would be something to do. So, we bought a truck and the licence off him and then bought another truck and that’s sort of how we got into the business.”

Apps began with just two trucks as a local pickup and delivery company in the Toronto area, said McDonald, the president of the company. But through steady growth, the company has grown and now boasts 240 trucks nationwide.

“Through the years we added new customers and new services,” he said. “At the beginning a lot of what we added was through interline partnerships, so like Quebec, Northern Ontario, areas outside the scope and size of the fleet we had at the time. But we continued to grow so we pretty much doubled every year for a number of years and I think in 1998, we opened up in Western Canada. Then we started moving freight by rail to Vancouver, Calgary, Edmonton. At that time, we had partnerships with carriers in those locations.”

Since then, Apps has bought out most of the partnerships and currently has three terminals in B.C., two in Alberta, and its main office for Ontario in Mississauga.

Mostly, the company hauls retail commodities, picking them up from distribution centers and delivering them to stores. Though it also hauls a large amount of wholesale building supplies.

“Pretty much soup to nuts,” McDonald summed up.

When asked what makes Apps stand out from the competition, McDonald said by and large, what the company does better than most, is its ability to be flexible with both its customers and staff.

“In the early days of trying to build the business, I discovered that not everybody likes to ship the same and not everybody is open the same hours, and not everybody wants to receive the same,” he said. “The billing, they have preferences. So, I started looking at ways to reduce our costs by consolidating shipments and various billing consolidations and so on for customers. It really was about flexibility around us providing them something the way they wanted it as opposed to saying ‘We do it this way and that’s the way it goes.’ And that sort of flexibility has served us well for almost 35 years, so I think it works.”

Internally, Apps is also flexible with its drivers.

“We work with people if they get sick or if they have family issues to deal with,” he said. “They’re all driving new or newish equipment. They’re home every night. But we try to work with their schedules so if somebody’s got to drop kids off in the morning, and they can’t get in until 9:00, we can put them on a run that leaves at 9:30 or 10:00. We kind of build our fleet and the guys in it around our schedule as well as theirs, because you know, we have the ability to do that. It just makes it a nice comfortable place to work. We’re not grinding you every day.”

This outlook has helped Apps keep its driver turnover low, McDonald said, adding that hiring new drivers isn’t something the company has had to work hard at until this year.

“We have no problem getting guys to come through the door but the challenge is when we put them through our rigorous intake process, they don’t do well. We have guys come through who have five years of experience and then they can’t properly inspect a truck,” he said. “And we can’t hire them. Because that’s not safe and safety is number one here at Apps Transport.”

In addition to its hiring and training process, the company has also invested money in forward and rear-facing cameras for its trucks in the name of safety.

“We see it as another tool to protect the drivers,” he said. “You know, the reason we implemented it was to protect ourselves and the drivers against little things. Plus, it’s a great coaching tool. I mean, if the guy’s driving with his seatbelt off or if he’s driving with a coffee in one hand and is weaving around you can get them in and you can say, ‘Listen, we would like you to be a little more diligent, a little more focused.’”

In the future, McDonald said he sees the business continuing its steady growth.

“From an Ontario perspective, I see us adding additional satellite terminals, because we’re sort of at capacity where we are,” he said. “And probably adding a few more locations in Western Canada and perhaps expanding our warehouse footprint a little bit. Stuff’s always going to have to be on a truck at some point. I think with e-commerce and the likes of Amazon coming in and them maybe putting together their own fleet, yeah, I mean, I think things will change. They always do, but as long as you’re willing to be flexible and change with it I think there’s always the ability to be still involved. I’m optimistic about the future of trucking for sure.”