THE STORY SO FAR
Mark is driving across the Prairies and comes across a truck like no other he’s ever seen before. He pulls up alongside of it and realizes the man behind the wheel isn’t driving, but rather he’s reading a magazine. It’s one of those autonomous trucks that operated without a driver and Mark was awestruck… 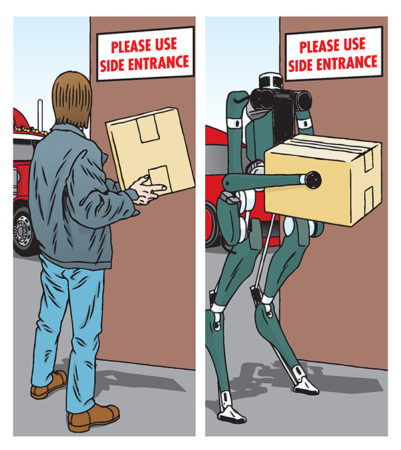 As Mark followed the autonomous truck down the highway, perfectly matching the machine’s perfect obeyance of the speed limit and traffic laws, he thought long and hard about what the future held for truckers if such futuristic machines were nearly ready to take over the roadways.

If there was one good thing about the march of technology – at least in this case – it was that while it was progressing, it wasn’t doing it quickly enough to put drivers out of work any time soon. They weren’t going to take over within the year, probably not even in five. Maybe it’ll be like the cure for diabetes which always seems to be “five years away.”

That’s because for all of its high-tech wizardry and space-age technology, someone was still required to sit in the truck and monitor the thing’s progress. And so, if anything should go wrong, there was always a big red button on the dashboard that allowed the monitor to take over complete control of the truck.

The thought of things getting too hectic or too real for the truck’s computer to handle put a smile on Mark’s face. But a second thought crossed his mind and wiped the smile right off. How close was a self-driving truck with a computer that could think for itself to the apocalyptic image Stephen King offered up in his short-story-turned-horror-film Trucks.

And while these trucks needed monitors to oversee their performance in the short-term, what’s to say that even that job might be taken away from a trucker and handed to some engineer or technician who had never driven a truck before but who could evaluate and correct whatever is going wrong with truck’s guidance system?
So, one less driver, one more technician… as if those highly trained individuals needed to take over the trucking industry, too.

But it wasn’t all bad. A big issue in the driver’s favor is road conditions and knowledge of a city or delivery locale that is nowhere close to simply backing up to a loading dock and having computer-guided forklifts unload cargo. Mark had delivered countless loads in city environments where the streets made no sense and the addresses seemed all wrong, yet loads were delivered to these places daily without problem.

After all, a driverless truck can’t read a ‘Use Side Door’ sign, decipher bizarre street numbering, or back down a long one-way street to save half an hour’s driving time. It was quite possible that truck drivers could take on the job that harbor pilots do for large ocean-going ships. A driver’s knowledge of the city or local driving styles could require them to take over an autonomous truck on a city’s outskirts, then navigate the truck through traffic to its final destination.

Finally – and perhaps the most significant issue in all of this – are the other aspects of a driver’s job that have nothing to do with driving. Sure, you can design a truck that bills its clients the second it reaches its destination, that can probably also prevent a load being unloaded until its paid for, but what about the actual delivery of goods.

Mark had delivered hundreds, maybe even thousands, of loads where there was no one around to unload his truck, or very few people at least, and he had to pitch in if he wanted to get away in any kind of timely manner. A driverless truck couldn’t do that. A computer can make decisions of logic, but never one of common sense.

In fact, this obstacle even has a name: The Fifty Foot Problem. It basically revolves around the question of how an autonomous truck delivers its cargo to a residential home, or business on the second floor, or a door on the other side of a fence. In other words, the last 50 feet before a load’s final destination.

Mark had read about automaker Ford’s efforts to develop a robot named Digit, which features stork-like legs, looks a lot like a droid you might see in a Star Wars battle scene, and can carry a 40-lb load. They are so far along on its development that the company is hoping to roll it out in 2021 as part of its autonomous fleet offering.

So, science is not only trying to get rid of drivers, but delivery men too.

It made Mark wonder, if so many people were going to be replaced by computers and robots, who would still have a job to earn enough money to afford the things that were going to be delivered by these machines?

But Mark was hopeful that for the cost of putting one autonomous truck on the road, a company could employ 100 owner-operators, with everyone still making a nice profit.

Finally, were the nation’s highways even ready for trucks rumbling down the road without someone behind the wheel? And what about the public? Would people feel safe driving down the road knowing there wasn’t someone in control of the giant semi sharing the roadway with them and their families.

But as much as Mark could argue the pros and cons of autonomous trucks and the onslaught of technology, the bottom line was that these things would eventually be safe enough, and cheap enough, to make financial sense to the majority of companies moving goods on the nation’s highways.

It was going to happen, and the job of truck driver – the most common job in more than half of all U.S. states – might no longer be a viable occupation.

Mark was intrigued and wanted to know more, and to see how these trucks actually worked.

Mark Dalton returns next month in Part 3 of The Truck Without a Driver.