THE STORY SO FAR

Mark is driving across the Prairies and comes across a truck like no other he’s ever seen before. He pulls up alongside of it and realizes the man behind the wheel isn’t driving, but rather he’s reading a magazine. It’s one of those autonomous trucks that operated without a driver and Mark was awestruck.

He spends a while thinking about what driverless trucks mean to the trucking industry and is able to see both sides of the argument. Trucking goods would eventually be more economical and there would be less need for drivers. However, drivers would still be needed in some capacity and other opportunities might open up for them in the industry… 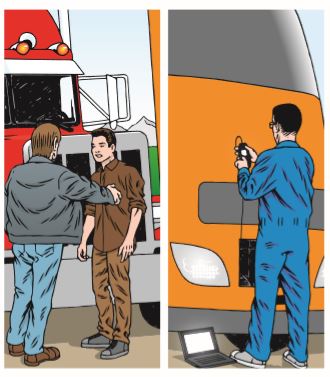 Mark decided to follow the autonomous truck to wherever it was going in order to get a better look at how it worked and how it might eventually put him out of a job.

The problem was, the truck never stopped.

That was obviously the appeal of the whole thing as this truck could drive for days – provided it had enough fuel – without stopping once to rest, go to the bathroom, or have a bite to eat.

Now, there was a person inside the cab monitoring the truck’s progress and that person no doubt had to eat, sleep and relieve himself, but there had to be provisions inside the truck to accommodate all of its human cargo’s needs.

But Mother Load wasn’t autonomous and Mark desperately needed to relieve himself.

He could have grabbed an empty soda bottle, relieved himself and dropped it off at the next truck stop, but Mark was never a fan of that, especially when more than a few drivers disposed of their bottles – full – on the side of the road.

And so Mark had to stop.

After a trip to the bathroom, Mark topped up on fuel and bought a sandwich at the counter and was back on the road in less than 20 minutes. But by now the truck he was following was long gone, no doubt 25 or 30 kilometers down the road. There was no questioning how a trucking industry without human drivers might appeal to longhaul carriers.

When Mark got back out on the road, he kept his eyes open for the driverless truck, but to no avail.

However, after an hour on the road – driven at slightly over the speed limit – Mark did come upon the truck. Or at least it was a similar autonomous truck, differing only slightly in its markings from the first.

The first truck had a code number of four, this one’s was 12. So, there have been at least 12 of these built, he thought. Probably not all of them were on the road at the same time, but even if only half were undergoing trials, that was a significant number of trucks that didn’t need drivers out on the road.

And just as he was contemplating the number of trucks, there appeared yet another of the trucks up ahead, this one stopped on the side of the road with its driver – uh, monitor – standing on the shoulder smoking a cigarette.
What good luck, thought Mark.

He pulled over to see if the man needed a hand…after all, that was the proper thing to do, one driver to another non-driver.

“Broke down, eh?” Mark said as he approached.

“Not really,” the man said, butting out his smoke. “Truck’s running fine, but the computer interface is down.”

“The what?” Mark said, doing his best to sound clueless.

“The computer inter…” he hesitated. “The system that runs the truck.”

Mark put a hand to his chin. “But you’re the driver… aren’t you the system that runs the truck?”

He shook his head. “This truck has no driver,” and when he said the word driver, he put a pair of air quotes around it.

“I’m an engineer. I’ve got my A/Z licence, but only because they wouldn’t let me ride the thing without it.”

“No driver?” Mark furrowed his brow and shook his head. “But you still need a driver’s licence even if you just want to ride in this truck?”

“It’s a long story,” the man said, lighting up another cigarette. “But the short version of it is, this truck has no driver, and a lot of people are spending a lot of time and money trying to make it work.”

“Not doing too well, are they?” Mark said, gesturing to the truck parked on the side of the road.

But instead of getting defensive the man smiled.

“This is the first breakdown this truck has had in two weeks. It’s gone between Regina and Calgary 32 times in 14 days before today.

Mark swallowed once and found his throat had gone dry.

Thirty-two times in 14 days was a pace that even a driving team couldn’t match. Mark could feel the start of something sick growing in the pit of his stomach.

And just then, a van pulled up and two men jumped out.

“My help has arrived.”

Mark marveled at the men who looked more like computer technicians in their spotless coveralls. Instead of wrenches and oil cans, they carried tiny bags with testers that had wires bristling in every direction, and several laptop computers, no doubt so they could talk to the truck and ask it what was wrong.

Something told Mark that drivers might not be the only ones out of a job if these things ever took over the highways in earnest.

Before leaving Mark found the monitor he’d spoken to earlier and asked him where the man was heading.

“Calgary,” he said. “There’s a terminal off the highway just before you get into town. That’s where they all end up.”

“Thanks,” Mark said, knowing exactly where he was heading.

Mark Dalton will return next month.