And while that doesn’t sound too different from the rest of the trucking companies in the U.S. and Canada, Liberty says it’s setting itself apart by actually doing something to entice the younger generation to work for it.

Liberty Linehaul was founded in 1988 by now president Brian Taylor and partner John Shantz. They worked together until 1997 when they split the business and Shantz took on the propane division and Taylor took charge of the transportation side.

Before starting his own business, Taylor was a mechanic, then a driver, then an owner-operator. From there, he ran operations for some trucking companies before deciding to buy one of his own. 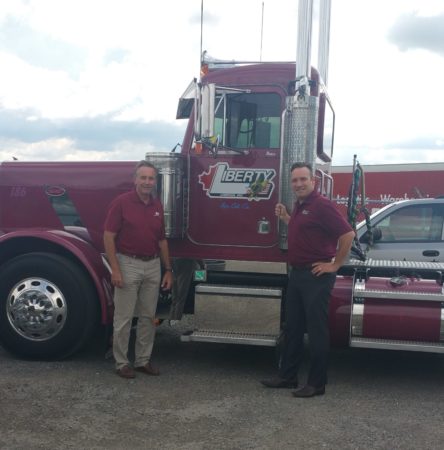 Today the business is flourishing, with 55 trucks operating out of its Ontario facility and 27 out of its California terminal. The company hauls mostly specialized freight, and by that Taylor means “blanket-wrapped, multiple stops with appointment deliveries and high-value products.”

Liberty Linehaul truly believes that its drivers are the main reason for the success of the business today.

“We tend to have a better class of drivers, because we expect more out of them,” he said. “They’re decking freight, blanket-wrapping, everything. And they like it because they become an extension of our salesforce. They’re always feeding back information to us, and sometimes we are able to give another lane to that account because of the relationship these drivers develop with the customer.

“We don’t think about our drivers as just those who drive trucks. And some companies are scared to do that. Some companies won’t allow the drivers to call the customer directly, they want the call to happen through customer service. But at Linehaul, we trust our drivers completely with our customers, and we want them to call ahead and build that relationship with customers.”

Just like its forward-thinking approach of considering drivers to be more than drivers, its hiring strategies are way ahead of the typical approach of most carriers.

“The problem with bigger companies…they pay recruiters for putting drivers in seats,” Taylor said. “So, that tells me that they’re not looking for long-time employees, they’re just looking to fill seats. And that approach causes a lot of turnover.”

At Liberty, Taylor says the focus is on finding the right fit for the job, and on reverse interviewing.

“We are very honest with drivers and potential drivers from the get-go in the first interview about what is expected from them,” Taylor explained.

Gerber said that so far this has worked out, and in the instances where drivers find it’s not a fit, the company has a solution for them as well.

“We know a lot of trucking companies around here, so if what they want isn’t found here, then we can suggest other places for them to apply to,” he said.

Turnover at Liberty is quite low because of the efforts taken by management that haven’t gone unnoticed. Liberty was named one of Canada’s Best Managed Companies and was also named as one of this year’s Top Fleet Employers.

“We are big on accommodating all of our staff,” Taylor said. “If we can move people from the truck to the office, we will. We will always try and work with drivers, especially to work on giving them a different route if things change in their lifestyle. Like if they’re starting a family, or need to be home more, we have no issues with that. If we can give them a local route, then we will.”

It also understands the value that millennials add and doesn’t follow the trend of labeling them as the lazy generation.

“We need to get better with millennials and younger people and figuring out how to work around their needs better,” Taylor said. “We are getting better and we have a few young guys here that like it and I know a lot of companies I talk to, they’re not happy with the younger guys they’ve recruited. But we have some young guys here and they are creating customer service here. I don’t think people are different at different ages.”

All of this has secured the company its biggest strength: a team of people who go above and beyond their expectations each and every day on the job.

“Our people all the way down the line are our greatest assets,” Taylor said.

One of the most memorable customer service moments happened a few years ago, Taylor recalled.

“He was delivering some household furniture and he was supposed to go to a warehouse,” he said. “Somehow we got the end delivery address and it ended up at a house. So, when he got there, he didn’t call us – he just made the delivery because after he went to the house, he noticed the lady was disabled. He actually helped take the railing off the porch and put the couch in her living room.”

Taylor said he asked him why he didn’t just call someone at Liberty to get the warehouse address and the driver said he felt so bad, that he “just wanted to help her out any way he could.”

“And our customers get that type of customer service from our guys, every week,” Taylor boasted.

Today, unlike most trucking firms that have their eyes on the prize of acquiring a smaller business and growing to hundreds of trucks, Liberty is taking its time and growing its culture instead.

“With our drivers on the road, our social media platform keeps our drivers and office staff and warehouse staff aware of what’s going on, on both sides of the border,” Gerber said.

“When we have a driver out in Nebraska, he can see everything that’s happened here, like how our BBQ fundraiser went and how much money we’ve raised. It’s really brought the whole company closer together.”