A long-awaited final rule on electronic logging devices (ELDs) from the US Federal Motor Carrier Safety Administration (FMCSA) will force truckers in the US – including the estimated 140,000 Canadian drivers who operate there – to modernize how they track and present their hours of work.

Released on Dec. 10, 2015, the hefty 516-page final rule outlines extensive technical requirements that must be met by ELD manufacturers before their systems are accepted by the FMCSA. Requiring drivers to transition from paper to electronic logs will improve compliance and simplify enforcement, according to US Transportation Secretary Anthony Foxx. 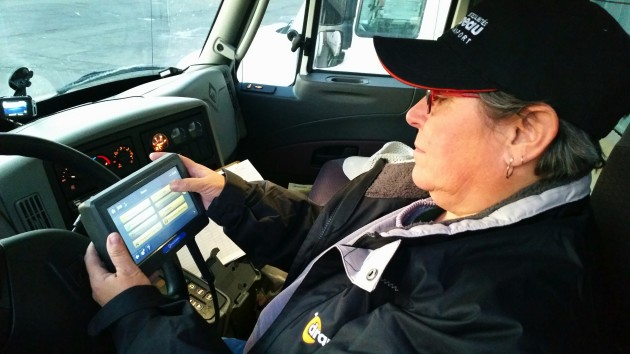 “Since 1938, complex, on-duty/off-duty logs for truck and bus drivers were made with pencil and paper, virtually impossible to verify,” he said. “This automated technology not only brings logging records into the modern age, it also allows roadside safety inspectors to unmask violations of federal law that put lives at risk.”

Drivers operating in the US will be required to use electronic logs by Dec. 18, 2017. Systems in use today do not yet qualify, as they have not been updated to reflect all the technical requirements laid out in the final rule. As such, today’s e-log systems, under the context of the law, are defined as automatic on-board recording devices (AOBRDs). Users of those systems will have until Dec. 16, 2019 before they must transition to ELDs that meet the new technical standard.

Elise Chianelli, senior product manager, safety and compliance with PeopleNet, said during a Webinar explaining the new mandate that most ELD suppliers estimate it will take between 12 and 24 months to update their currently available AOBRD platforms.

“The FMCSA has introduced a grandfather clause that will allow two additional years for AOBRDs to come up to the ELD standard,” she said.

Kate Rahn, director of marketing with Shaw Tracking, pointed out that systems in use today won’t necessarily have to be replaced to comply with the new standard.

“For us, on newer versions of product, the requirements for ELD will be upgradable through software updates; both firmware and software applications,” she said.

This should minimize the cost of compliance for fleets that have already begun electronically logging hours-of-service through AOBRDs. For those that aren’t, there will likely be many options to choose from.

“This just opened up a billion dollar market and you know what that does – it attracts a lot of players,” said Jim Griffin, chief technical officer with Fleet Advantage. “You don’t have to get a big piece of the market if you’re a smaller player to make money, so there are a lot of smaller players coming into the market.”

The FMCSA will publish a list of accepted devices on its Web site as they are approved.

Griffin warns fleets may struggle with how to manage and coordinate the data generated by disparate ELD sources. Every ELD presents data differently, Griffin noted, and fleets could find themselves having to become familiar with many different platforms as they encounter systems from a wide range of suppliers through acquisitions, pre-equipped leased trucks, the purchase of pre-equipped used trucks or the signing-on of owner/operators.

“There will be a lot of mixed fleets running various on-board computers all within one fleet and that data all looks very different,” Griffin pointed out. “I think that’s something that is going to be overlooked.”

The new standard offers an exemption to operators of trucks of a model year 2000 or older, since those trucks lack the engine electronics necessary to communicate with an ELD.

The ELD mandate received mixed reaction in the US. The American Trucking Associations (ATA), long a proponent of mandating ELDs, welcomed the legislation, dubbing it a “historic day for trucking.”

President and CEO Bill Graves said “This regulation will change the trucking industry – for the better – forever. An already safe and efficient industry will get more so with the aid of this proven technology.”

Less enthusiastic was the Owner-Operator Independent Drivers Association (OOIDA), which vowed to fight the legislation.

“This rule has the potential to have the single largest, most negative impact on the industry than anything else done by FMCSA,” blasted Jim Johnston, OOIDA president and CEO. “This regulation is absolutely the most outrageous intrusion into the rights of professional truckers imaginable and will do nothing at all to improve highway safety. In fact, we firmly believe it will do exactly the opposite by placing even more pressure and stress on drivers than they already deal with.”

OOIDA successfully thwarted a previous attempt by the FMCSA to mandate ELDs, arguing they could be used by shippers and carriers to harass drivers into using up all their legally available driving time, even when tired.

But in November 2015, just weeks before publishing its final rule on ELDs, the FMCSA passed a law that prohibits the coercion of drivers by motor carriers, shippers, receivers and other transportation intermediaries, effectively addressing concerns ELDs could be used to bully drivers. It also built into the final rule safeguards to prevent driver harassment, including the requirement for a mute button on the device that can help prevent a driver from being disturbed by dispatch while in the sleeper berth.

In Canada, the Canadian Trucking Alliance (CTA) renewed calls for an ELD mandate to be implemented here.

“With the publication of the US rule the Canadian governments can no longer claim they need to see what the Americans do before getting down to business here,” said Bradley. “Now we are under the gun and in the situation where we have about 24 months to introduce our own mandate.”

The Owner-Operator’s Business Association of Canada (OBAC) says that unlike OOIDA, it doesn’t oppose an ELD mandate outright.

However, Joanne Ritchie, executive director of OBAC, says she does question the need for such a rule. She says the operational and administrative benefits of using electronic logs are proven, though the safety benefits are not.

“There is no strong evidence that there are any direct safety benefits,” she told Truck News. “Which begs the question, if there’s no safety benefit, and ELDs are cost-effective for both industry and enforcement, why do we need a government mandate? It’s a question provincial and territorial governments (Ontario being the exception) are asking as well.”

Ritchie said OBAC is in favour of “voluntary adoption” of ELDs, particularly when accompanied by fair driver pay rates and operational practices that compensate for the shortcoming of current hours-of-service rules.

“Most small fleets, O/Os, and drivers we talk to support the use of ELDs,” Ritchie said. “Companies who are paying a decent dollar off the e-logs and managing their operations (legally) to compensate for the shortcomings of HoS that have earned their drivers’ acceptance of the technology. And even for the naysayers, it’s less about the technology, and more about driver pay and the unforgiving inflexibility
of HoS.”