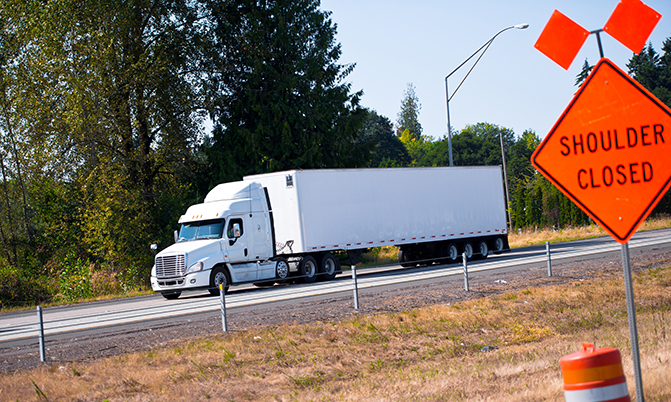 Government can never keep pace with ongoing infrastructure needs, and in light of a recent priorities list from the Canadian Trucking Alliance, several western Canadian roads are in need of attention.

WINNIPEG, Man. — Western Canadian roads are in need of their fair share of infrastructure upgrades, something not lost on those traveling this side of Ontario.

The Canadian Trucking Alliance (CTA) recently released its 2019-20 Infrastructure Priorities document, with the vast majority of needs being in Western Canada.

The Trans-Canada Highway around Winnipeg, Man., is one area requiring several improvements. Manitoba Trucking Association (MTA) executive director Terry Shaw explained there are a handful of proposed projects all connected, which if completed would greatly improve traffic efficiency and safety in and around the city. One of the most vital projects on the MTA’s list is improvements to Winnipeg’s PTH 100 South Perimeter Highway. Traffic is rerouted to the PTH 100, as the municipality lacks a high-speed road through the city.

“The problem with that is over the years, they haven’t treated it like a high-speed freeway,” Shaw said the PTH 100.

“Around every six to nine kilometers there’s an at-grade crossing on the ‘high-speed’ perimeter highway. It’s stop-start, it’s highly inefficient, it also causes a whole bunch of road safety issues, because not only are there at-grade crossing, but there’s egress and access points across the perimeter.”

The South Perimeter Highway is also the Trans-Canada Highway. Shaw said Manitoba has not been a good caretaker of Canada’s primary east-west highway, and a better job must be done to improve the setup of that section of the PTH 100.

In addition to the South Perimeter, there is a proposal to create two bypasses that would help improve commercial vehicle efficiency in the area.

The first would be a bypass around Headingley, Man., just west of Winnipeg. As it is set up now, Shaw said those traveling through the area are on what he called an “inner-city road,” despite it being the Trans-Canada.

Another bypass heading south toward the U.S. border at St. Norbert is also being proposed.

Traffic heading in this direction currently must drive through the small community, which includes a pedestrian cross-walk, toward what Shaw said is the busiest border crossing west of Detroit-Windsor.

Rounding out the MTA’s Top 3 is a proposed Chief Peguis extension. This would enable carriers in the area – including Bison Transport and TransX – to avoid having to either travel through Winnipeg or go out to the Perimeter Highway, only to come back into the city.

Heading west, Saskatchewan has its own infrastructure needs, including a much-needed bypass around Saskatoon, routing traffic north around the city.

The Saskatchewan Trucking Association (STA) is proposing to start the bypass at Hwy 11 south of Saskatoon, hooking up north with the highway toward Prince Albert and Hwy 16 to North Battleford. The bypass would then extend to Hwy 14 west of the city, all reducing traffic congestion on Circle Drive and Idylwyld Drive.

Hwy 16 is another thoroughfare requiring improvements.

With some upgrades recently completed, including twinning from the Alberta border to Saskatoon, there remains approximately 400 km of the highway that is single lane, resulting in congestion and inefficient traffic flow, according to the CTA.

The CTA said 23% of traffic on this portion of Hwy 16 is from commercial vehicles.

The STA added the need to twin Hwy 16 east of Saskatoon to the Manitoba border near Portage la Prairie.
“This would be a benefit for long combination vehicles (LCVs) by providing another corridor for commercial carriers traveling from Manitoba into Northern Saskatchewan and through to Alberta,” said STA executive director Susan Ewart. “Additionally, this also reduces traffic congestion around Regina’s city limits by providing an additional corridor for LCVs to use.”

Both the STA and CTA have also recognized the need for more rest stops along the Trans-Canada Highway in Saskatchewan to comply with HOS regulations and to conduct safety inspections.

There are two particular projects in the Wild Rose Province the Alberta Motor Transport Association (AMTA) would like to see come to fruition – Northeast Corridor improvements and twinning of Hwy 40.

The AMTA said it is “very concerned” with the lack of roads connecting Fort McMurray to major corridors that lead in and out of the province.

Safety is also a concern with the Northeast Corridor, as it is the busiest route in and out of the oilsands.
The AMTA is proposing several upgrades to improve traffic flow in the area, including identifying Northeast Alberta in the Pan-American or CanAmex trade corridors; twinning Hwy 63 to connect to an east-west or north-south twinned corridor; dividing roadways to address public safety issues; and completing the ring road to connect Fort McKay, Fort McMurray, and the oilsands to Hwy 881.

Being a heavily-traveled corridor, Hwy 40 south of Grande Prairie is also in need of upgrades, especially the Wapiti Bridge and section in the Montney area, which the AMTA said is “one of the most dangerous in the country and inhibits transportation of products and services into the North-South Trade Corridor.

Rest areas, or lack thereof, are a primary concern for carriers traveling in British Columbia.

Shelley McGuinness, communications specialist for the B.C. Trucking Association (BCTA), said there is a need for more rest stops along several highways in the province. These include the Trans-Canada east of Kamloops to the Alberta border, along Hwy 5 on the Coquihalla and toward the Alberta border, along Hwy 97, and in the Lower Mainland – addition truck parking has been announced under the Port Mann bridge.

“We’re with the CTA on the position that federal and provincial governments should work together for a coherent rest stop strategy for national highways,” said McGuinness. “One concern about ELDs and rest areas is that existing rest stops may not have enough parking spaces for trucks with stricter oversight of HOS.”

McGuinness said any new rest stop should be constructed within 50 km of an urban center, and at maximum intervals of 150 km thereafter. They should offer sufficient parking for short stops as well as overnight, have truck parking bays, and provide basic amenities like washrooms, food service, tables, Internet access, and protection from elements such as sun, rain, and snow.

“Many now don’t meet these criteria,” said McGuinness, “and could just be a single-lane pullout for chain-up with a pit toilet or two and a picnic table.”

A major endeavor to widen Hwy 1 to six lanes from Langley to Hope has been identified by the CTA as being of “critical importance.”

The CTA labels this proposal as a regional impact project, as the corridor is a major bottleneck in the region due to its physical barriers, such as height restrictions that are not in alignment with Alberta’s nine-meter high-load corridor.

The CTA indicated that adding lanes would improve safety, access, and reduce congestion in the area.
Replacing Vancouver’s George Massey Tunnel, which is said to have safety issues and would be expensive to upgrade, is another infrastructure priority for the CTA.