July 30, 2012
FERGUS, Ont. -- Fifty years on the road without an accident, a history of stopping to help others when needed and a commitment to professionalism have earned Harvey McDonald of Brantford, Ont. the 2012 Truck News Owner/Operator of the Year... 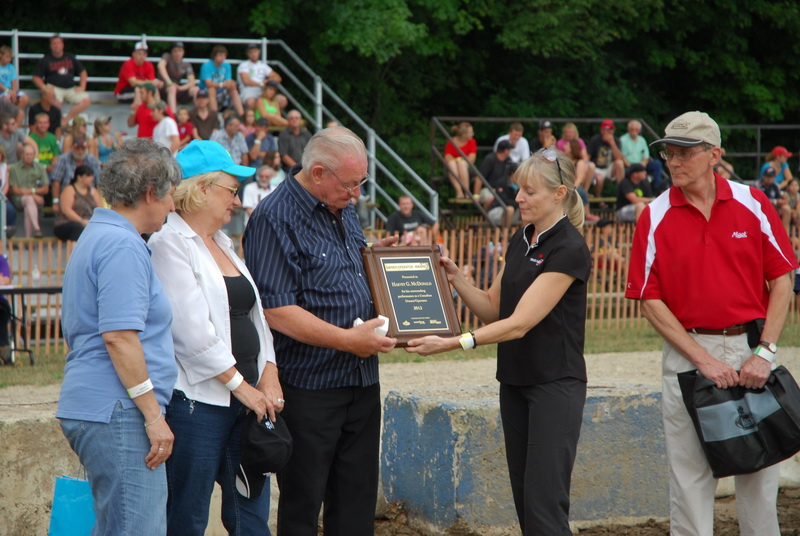 Harvey McDonald, 2012 O/O of the Year, receives a plaque from Brenda Grant of Truck News. To Harvey's right is wife Marg Oakley and OBAC's Joanne Ritchie. Mark Laine from sponsor Mack Trucks stands by. Representatives from sponsors Castrol and Goodyear were also on-hand for the presentation as well as officials from TransX.

FERGUS, Ont. — Fifty years on the road without an accident, a history of stopping to help others when needed and a commitment to professionalism have earned Harvey McDonald of Brantford, Ont. the 2012 Truck News Owner/Operator of the Year award.

McDonald was presented with the award July 27 at the Fergus Truck Show.

Through this career, McDonald has owned 12 trucks, yet has committed to never going into debt to fund a new ride, methodically stepping into newer and nicer trucks through his career.

McDonald has been leased to TransX for the past four years and before that, spent 10 years with Transport America. Now, McDonald routinely runs from Ontario to Winnipeg, down into the States and then back to Canada. McDonald has run about four million miles over his career. He refers to his logbook as his ‘Bible’, commits himself to complying with all the rules and regulations and yet won’t hesitate to stop to help others when the opportunity arises.

He recalled coming across a cowgirl near Edmonton who was struggling to round up a herd of cattle that had escaped onto the highway. McDonald rounded up the cows and then remained behind to help rebuild the fence.

McDonald has four adult children and a new bride (he re-married in mid-June) and has in the past volunteered to work through Christmas and other holidays so drivers with young families could remain at home during these occasions. He usually travels with his poodle Micky, who has accompanied him everywhere from Yellowknife, NWT to Laredo, Texas.

The Owner/Operator of the Year Award is sponsored by Castrol, Goodyear and Mack Trucks and supported by the Owner-Operators Business Association of Canada. McDonald won $6,000 cash, a diamond ring and an assortment of other prizes from the sponsors. You can read a complete profile on this year’s winner in the September issues of Truck News and Truck West.