KANANASKIS, Alta. – The Alberta Motor Transport Association’s (AMTA) Partners in Compliance (PIC) program appears to be at a crossroads.

Carriers that have reached PIC status have been achieving the highest of standards when it comes to safety and compliance, and now administrators and members are searching for new ways the program can have a positive impact on road safety.

During the PIC AGM, which ran in conjunction with the AMTA’s annual Leadership Conference and AGM in Kananaskis, Alta., April 26, discussions centered around how the program can make a difference for carriers that are not currently part of the PIC family.

In Alberta, there are approximately 25,000 active carriers. Of those, 66 are certified PIC members.

Part of the issue voiced by some members, including Bob Hill of Hill Bros. Expressways, is the need for better support from government.

Up until 2018, the provincial government had provided funding to the PIC program. The AMTA is now the primary financial support keeping the “bare bones operation” afloat, with a total contribution of around $453,000 annually, which includes funding contributions, marketing, and various other forms of monetary assistance.

Hill said he is worried the lack of government funding will threaten the PIC program and that it could fall apart.

Andrew Barnes, acting PIC director, said he believes the program’s reserve funds should last about three years, and now is the time for PIC to explore alternative ways the program can have an impact on the industry as a whole and not just for its members.

Several outside factors had a significant impact on PIC during this past year, none more so than the Humboldt tragedy and subsequent government action on mandatory entry-level driver training (MELT).

Chris Nash, president of the AMTA, said the Humboldt collision provided a better opportunity for collaboration, as the public and those within the industry want a greater sense of road safety, something PIC and its member carriers provide.

He added there was a need to move quickly on this effort, and that in addition to carriers, shippers and regulators are showing greater interest in making Alberta’s roads safer.

Though the industry is heavily regulated, Nash said all stakeholders have an interest in increasing road safety, and a great deal of that starts with training.

Barnes agreed that more can be done from the shippers’ standpoint to improve road safety, saying PIC has reached a pivotal point on what more it can do to impact safety on the province’s highways.

Maintaining its present philosophy, there is a proposal to reconfigure PIC’s committee structure. With little need at this time for funding, Barnes suggested cutting the funding committee and continuing with an executive committee, advisory council, and adhoc working groups, a move that would put more on the plate of the advisory committee and reduce the workload of its carrier members.

Of the PIC members inspected last year, 321 passed, 143 had an issue that required attention but were permitted to carry on, and 123 were put out-of-service.

Compared to 2016, of the 475 PIC carriers inspected, 101 were put out-of-service, or 21%, approximately the same percentage as last year.

Dan McCormack, CVE inspector for Alberta’s northern region, said there are around 30,000 trucks inspected every year in the province, and approximately 10,000 are put out-of-service, which is 33%. 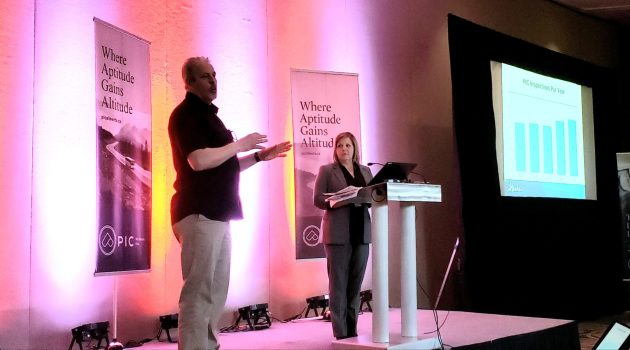 By far, the top reason PIC members receive out-of-service violations is due to brake system infractions, which numbered 107 in 2018.

In 2016, there were only 20 brake system violations, and McCormack said he suspected the reason behind the jump is due to improved technology, such as thermal imaging, enabling officers to better detect issues.

Second on the list was cargo securement with 49 violations, followed by lighting devices, suspension systems, and tires.