REGINA, Sask. — Troubled trucks in Saskatchewan have a new angel of mercy to help bail them out, and it’s not only a helpful heavy-duty hauler, it’s a machine that carries a message of hope to them as well. And just to make sure no one misses it, it’s bright pink!

Personifying that hope is Dionne Warner, who christened the new rig with a bottle of champagne at its official unveiling Jan. 16. Warner is an eight-time cancer survivor, a feat that may seem unbelievable on the surface but which also helps her send the message that just because you’ve been diagnosed with the deadly disease doesn’t necessarily mean it’s a death sentence. Warner is the inspiration behind the “Warrior of the Ribbon” truck, a 2015 75-tonne Freightliner Severe-Duty 122SD, with a 505-hp Detroit Diesel powerplant and Allison automatic transmission. It also sports dual side winches and rear winches that give it a total of 170,000 pounds of winching power.

Talk about having a lot of pull!

According to Dionne Warner’s truck dealer husband, Graham, “Five years ago I was standing in my truck dealership yard in Regina and watched two competitive tow truck operators leave after dropping off customers’ trucks, and I realized that the (tow operators) are dictating when they’ll pick up our customers’ trucks.” Making things worse, he said, his customers could end up waiting on the roadside for “maybe eight or 10 hours,” all the time blaming his company for taking its time showing up when it was really the tow truck’s fault. “So I went into the accounting department and asked them how much we’re spending with all these tow truck companies,” he said, “and it quickly became evident that we could justify our own truck.” 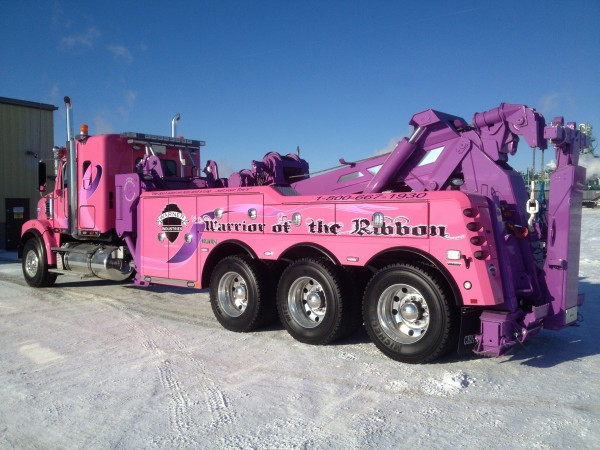 It turned out to be a great move that allowed Warner Industries, a dealer of Freightliner and Fuso trucks, Doepker trailers and Thomas Built buses, to be more in control of the entire service experience.

“We could influence truckers who’ve broken down, showing them that the Freightliner place is where they should take their truck to get it repaired,” Graham Warner said. The move was so successful that before long he realized he needed a second truck, and he decided to kill two birds with one stone, using the new unit to advance the cancer-fighting cause.

“I said we’re in (the towing business) for the long haul, but I want to make a statement. I want to really honour the phenomenal experience that Dionne gives anybody who meets her or hears her speak – so I thought this would be a great way to influence a segment of the public that typically wouldn’t get to be inspired by her.”

Dionne has been fighting various malignancies since 1995, when she was first diagnosed with breast cancer. “I was 29 and I was getting married to my first husband a week later when I found a lump,” she told Trucknews.com. “After we got back from our honeymoon and I realized the lump wasn’t disappearing, (I decided) it was time to see the doctor.”

Her family doctor, however, told her it was nothing to worry about – but her family asked her to get a second opinion anyway.

“It was this opinion that I believe saved my life,” she said, “because that doctor said it is something to worry about and we need to get it right away.”

It led to the battle that has seen her also defeat lung cancer (ironically, she says she has never smoked) and liver cancer, the latter of which she’s tackling for the fourth time currently. “It’s a journey I never expected to be on, but we’re still on the journey and I’m still in the fight,” she said. “I’ve also met some amazing and incredible people who inspired me as well.”

When she isn’t on the cancer battlefield herself, she returns to it willingly, volunteering at her local cancer clinic. She said people ask her why she’d go back after she’s been so sick, so many times, in her own fight, her response being that “people need to see hope standing before them and I can visit with these patients because I know what it’s like to sit in that chair.”

The new truck is meant more as an awareness-raiser than a fundraiser, but Graham Warner said he wouldn’t be upset if it brought in some money. 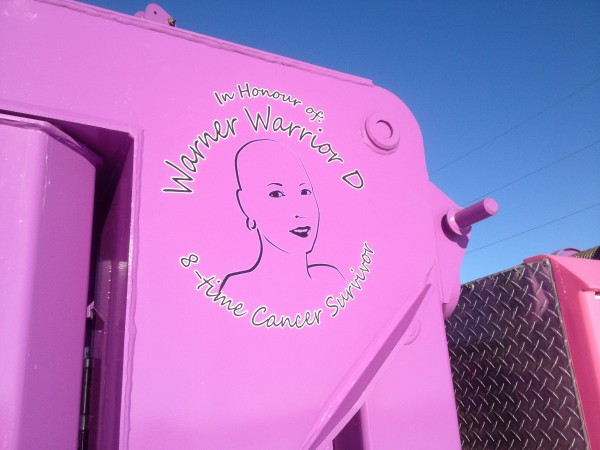 “Because of Dionne, Warner Industries always makes a substantial contribution to cancer research, so we’re not specifically using the truck to raise funds,” he said, “but any funds that it does raise will definitely increase what we donate.”

Warner said the company chooses to give directly to the Saskatchewan branch rather than the national umbrella group because “that way more money comes back to the province, because they get more of the pie when that national pool is divvied up.”

The introduction of the Warrior of the Ribbon made a splash in area media, social media, and even the international press.

“I think there were 1.2 million views on Facebook, and then CNN picked it up, the Toronto Star picked it up, we’re supposed to go on Canada AM,” Graham Warner said, noting that he also turned down an invitation to show off the truck at a show in the US because he wanted the focus to stay on cancer research in Saskatchewan. He also had to prepare his driver for the notoriety the truck would bring.

“For an operator of a rescue tow truck, getting a brand new ride can be a once-in-a-lifetime event,” he said, adding his driver was “pretty ecstatic” when he heard he’d get to work with a brand new unit – until he told him it was going to be pink.

“He could not hide his uncomfortableness,” he said. “It took about eight months to build this rig, and I swear I counselled him for those eight months that he would be a hero out there, that no one would dare laugh at him for driving a pink truck and that this is all going to be good.” 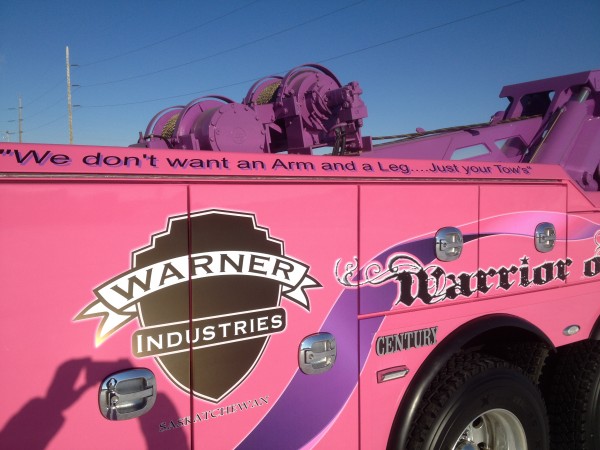 He doesn’t think he made the sale completely, but said the truck did that for him once it actually arrived. “We did the big unveiling in front of 100 people and all the TV cameras and radio microphones, and I asked him what he thought of the pink truck now, and he said it’s awesome. I’m so happy.”

The truck’s paint job contains its own tribute to Dionne, referred to her on its flank as “Warner Warrior D” and proclaiming the fact that she’s an eight-time survivor – and on a more lighthearted note that echoes the Warners’ positive attitude, it also includes the slogan “We don’t want an arm and a leg…just your tows.”

The truck, when all is said and done, is about more than sending a positive message of hope for the fight against cancer; it’s also meant to be a pink angel of mercy for the lonely driver stuck on the side of the road with a broken down rig.

“I had this thing in my head when I first came up with the idea that when there’s a devastating wreck and a couple semis all tangled up in the ditch,” Graham Warner said, “that for a bright pink tow truck to show up with this defiant Warrior of the Ribbon decoration on it, to me it’s such a strong strength and hope thing. And the fact that (the truck is) sorting things out and making things better at that wreck scene kind of symbolizes that it’s good to have hope and it gives you strength when you believe in hope.”

He hopes the message will be received even by those who only see the truck driving by, towing a disabled vehicle.

As for Dionne Warner’s ongoing battle, she said she has “no regrets. I’m here for a reason. I’m a fighter, I have a positive attitude; it’s about keeping hope alive as best as we can.”