HOUSTON, Texas – Truckers Against Trafficking (TAT) has expanded into Canada, entering into a partnership with the Canadian Centre to End Human Trafficking this past July.

A national hotline to report suspicions of human trafficking in Canada has been established, launching this past May. U.S.-based TAT is using the new hotline as part of its Canadian expansion, and is encouraging truck drivers north of the border to “make the call and save lives.”

Human trafficking is described as when force, fraud, or coercion is being used on a person to perform acts they do not want to do.
“The most powerful means traffickers use is coercion, using threats to them and their families,” said Smith.

Smith said it is more often the case that those who become victims of trafficking are fleeing a country or precarious situation, and therefore are unlikely to contact law enforcement when they are being coerced into trafficking.

“Children are the most vulnerable among us,” Smith said, “especially those who are homeless or come from an abusive household.”

The statistics on human trafficking is staggering.

Worldwide, there are around 40 million victims of human trafficking, according to the International Labor Organization, and they can be forced to have sex up to 20 times a day by their abusers. Smith said human trafficking is a $150 billion illegal enterprise, second only to drug smuggling, and is occurring in all 50 states.

With an estimated 3.5 million truck drivers on U.S. roads every day, TAT recognized the potential impact this group could have on human trafficking.

“If truckers knew what this crime really is, how many victims could be rescued, and how many traffickers could be arrested.” said Smith.

Goals of TAT is to have professional truck drivers trained and vigilant to recognize the signs of trafficking, particularly at truck stops, motels, rest areas, and city streets where this type of activity can occur.

And the effort is having an impact.

TAT stats show that 2,356 calls have been made into the U.S. National Human Trafficking Hotline – this does not include those made to local authorities or 911.

These calls have generated around 635 cases of human trafficking and have identified 1,186 victims.

Smith said TAT plans to hold an event in Toronto, Ont. this coming October to mark its expansion into Canada and to raise awareness to Canadian carriers and drivers. 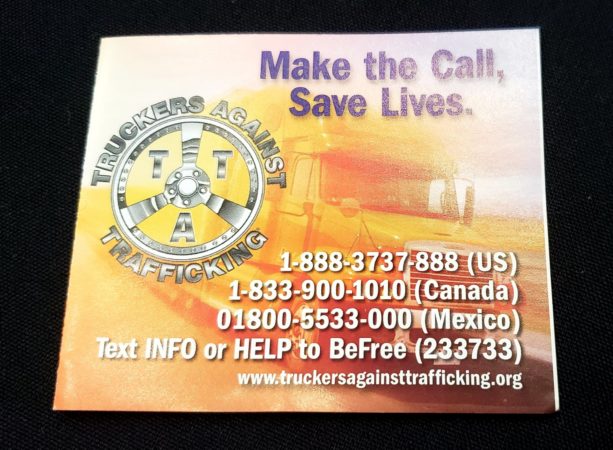