LAS VEGAS, Nev. – Mercedes-Benz continues through its van division to reimagine how final mile deliveries will be completed in the future. 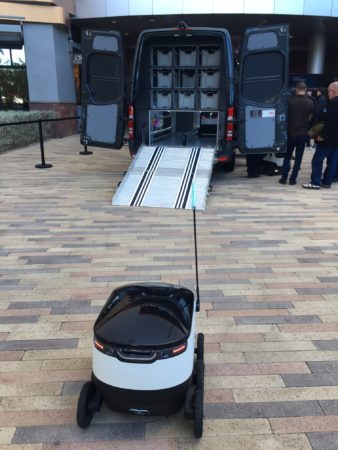 A robot from Starship Technologies prepares to grab a package from a Sprinter van.

“With this product, we would like to show what’s possible in the near future when it comes to transportation,” Mornhinweg said. “We are putting our vans as an instrument into the Internet of Things.”

The Vision Van concept was developed in response to increasing urbanization and virtualization, which will require delivery companies to become more efficient. The drones can be used to deliver packages from the van to nearby residences and businesses, or even to deliver a package from a distribution center to a van that has already departed on its route.

During CES, Mercedes-Benz also demonstrated for the press a Sprinter Van loaded with robots capable of delivering packages to their final destinations. The Vans and Robots project featured robots built by Starship Technologies. They had a range of two miles and could carry payloads of up to 20 lbs. The robots have undergone more than 15,000 hours of testing over more than two years, according to Henry Harris-Burland of Starship Technologies.

Andreas Raptopoulos, chief executive officer at Matternet, the company that manufactures the drones used by the Vision Van, said drones are likely to first be deployed in heavily populated cities where they can assist with crucial time-sensitive deliveries, such as medications or test results required by hospitals.

But he cautioned against expecting to see a drone-filled sky anytime soon.

“A drone will be involved in the transportation chain, maybe not where you see it,” he said.

Matternet’s drones can carry payloads of less than two kilograms or three litres.