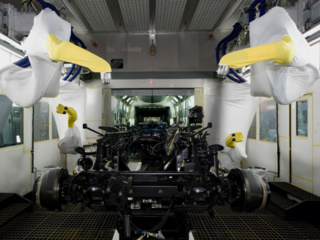 Peterbilt's Class 8 chassis are now being painted robotically, which should result in better coverage and an improved finish, the company said.

The company will begin offering a new front air leaf suspension, which Peterbilt officials claim will deliver improvements in ride and overall service maintenance. The new suspension will be available on Peterbilt Models 384, 386, 388 and 389 beginning this fall.

The upgraded suspension has a lower spring rate for improved isolation of road inputs, providing a 20% improvement in ride while also maintaining the roll stiffness and handling performance of a taperleaf suspension, explained Landon Sproull, chief engineer for Peterbilt. The reduction of road inputs into the cab will not only improve the ride for the driver, but also components which may last longer as a result of the improved smoothness, the company said.

Peterbilt also announced availability of its battery-based cab comfort system, ComfortClass, will be expanded to include 63-inch sleeper configurations beginning in June. Currently, ComfortClass is available only in Peterbilt’s Class 8 trucks with 70-inch sleepers.

ComfortClass provides idle-free heating, cooling and hotel load power for up to 10 hours, saving customers as much as 8% in overall fuel economy. The system is compliant with stringent emissions standards in California and can be plugged into shore power when it’s available. In cold climates, a small diesel-fired heater is used to keep the bunk warm.

“It provides climate control performance as effectively as traditional systems, but uses much less energy to do so,” explained Sproull.

Peterbilt’s medium-duty lineup was not ignored when the company was upgrading its vehicles. The truck maker’s entire line of medium-duty conventional trucks will be equipped with a new dash that features an enhanced ergonomic instrumentation layout and the ability to equip the vehicle with Peterbilt’s navigation system.

The new dash will be available in July. It will also feature an enhanced side window defrost system and new dash panel colours, company officials have announced.

“Peterbilt is bringing a new level of class to its medium-duty conventional line with our dash facelift,” explained Sproull. “The integration of the Peterbilt Navigation System may enable medium-duty customers to save thousands of dollars in reducing out-of-route miles.”

On the manufacturing side, Peterbilt announced it is employing the use of a new chassis robotic paint system which provides improved coverage and finish. The system is already in operation at Peterbilt’s Denton, Texas truck plant where it is used on Pete’s entire line of Class 8 trucks.