September 24, 2013
EDMONTON, Alta. -- It’s just like Domino’s Pizza: service within a certain window, or you get compensation. Except that it isn’t pizza being delivered, it’s remanufactured components such as differentials and drive... 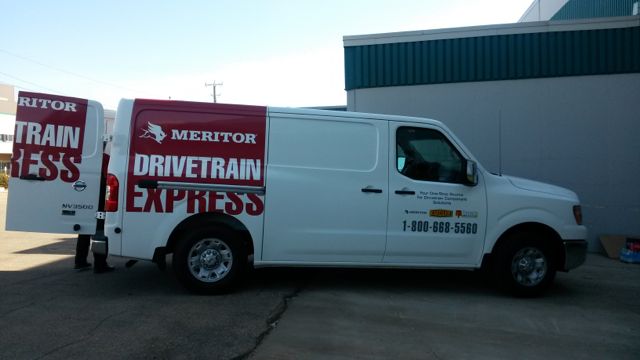 Meritor is promising to deliver roadside service within a promised time period, or compensate customers in a pilot project based out of Edmonton.

EDMONTON, Alta. — It’s just like Domino’s Pizza: service within a certain window, or you get compensation. Except that it isn’t pizza being delivered, it’s remanufactured components such as differentials and drive shafts to get your trucks back on the road where they’re making money, rather than stuck on the roadside where they’re costing money.

The concept comes from Meritor, whose pilot Drivetrain Express outlet was launched officially in Edmonton last week before a group of invited media and guests. The Drivetrain Express name is kind of an umbrella brand for the company, which is working with affiliates to make the concept happen.

Meritor thinks the Edmonton pilot makes an ideal proof of concept, thanks not only to Alberta’s booming economy but also to the wide variety of related sectors it services, from oil and gas, to agriculture, general and long-haul trucking and more. And if the new outlet does, indeed, prove the concept, Meritor plans to put more Drivetrain Expresses across Canada – probably from Ontario westward – and then head south to the US, tailoring each outlet to its individual market’s needs.

According to Brad Begley, director, corporate accounts, for Meritor Aftermarket, “a truck operator who needs a component replacement simply cannot wait days for parts to be shipped – it’s a ‘today’ business where every minute counts, and (Meritor’s) in-depth market knowledge – from new parts, to all-makes, to remanufactured units, enables us to expand our support and service to customers who need the right parts now.”

To that end, the Drivetrain Express branch keeps on hand a wide selection of inventory that includes Meritor’s own branded aftermarket components, though Terry Livingston, general manager, global product management and shared services, promised that it won’t just be an “all-Meritor” solution.

“What you see here, and I like it a lot, is not just our product in here,” he said while showing off the company’s new and well-packed Nissan NV3500 delivery truck. “This is an all-makes (solution) so you’re going to see even our competitors because we’re here to fix all units that break down.”

Not all components are on hand in the outlet, of course, but there’s plenty from which to choose, including an all-makes suite of made-to-order Mascot driveshafts and driveline components such as U-joints, center bearings, shaft tubing and yokes. They also stock Euclid clutches as well as Meritor genuine and AllFit drive axle and transmission components. The Edmonton outlet, which opened initially in 1999 as a Mascot remanufacturing distribution centre, boasts thousands of square feet of stuff that can be used to remanufacture components on short notice.

As for the “Domino’s effect,” the new Drivetrain Express outlet claims to offer a four-hour delivery or pick-up from the time an order is placed, to locations within 100 kilometres of the outlet.

Or what? Meritor will offer gift cards as a “token and pledge to stand by our delivery promise,” officials said.

“The renovated Edmonton outlet is another extension of our customer-focused solutions,” said Pedro Ferro, senior vice-president and president, aftermarket and trailer for Meritor. “We will continue to be innovative in the way we serve our customers and will consider adding more parts outlets in North America as market demand dictates.”

In other words, the Edmonton facility is a way for the Drivetrain Express concept to walk before it runs. That said, however, the company reps on hand for the official kickoff were pumped about the idea and think it’s going to go very well. The hope is that there’ll be more of them in operation by the time 2014 is rung out.

Drivetrain Express is actually kind of an outgrowth of a concept introduced this past January as Drivetrain Direct, a comprehensive, all-makes aftermarket drivetrain program Meritor says provides customers on both sides of the 49th parallel with drivetrain component expertise through the company’s Customer Care Centers. Drivetrain Direct offers all-makes drive axle and transmission parts, clutches, drivelines, and manual and automatic transmissions.