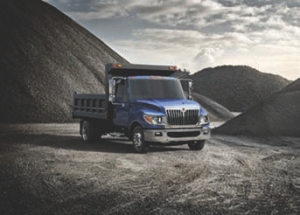 “The International TerraStar comes from the same blood lines as the rest of our commercial truck line-up,” said Jack Allen, president, Navistar’s North American Truck Group. “Its commercial-duty design will change the game in the work truck market by offering one of the most capable, most versatile and most drivable trucks in its class.”

The truck is powered by a 300 hp, 6.4-litre MaxxForce 7 V-8 engine capable of 660 lb.-ft. of torque. It’s comprised of a compacted graphite iron (CGI) block that offers high strength but low weight, the company says. It’ll also be available with a commercial-duty Allison 1000 transmission to optimize power output.

The TerraStar will come with Navistar’s in-cylinder EPA2010 emissions solution which doesn’t require diesel exhaust fluid, which the company feels will be a strong selling point, particularly since the absence of an SCR system frees up chassis space for body builders.

Navistar also says the TerraStar boasts 28% greater visibility than its chief competitor, a 107-inch BBC and a 44-ft. curb-to-curb turning radius for operating in tight spaces.

The roomy cab can comfortably seat three adults, the company claims, and an extended cab or crew cab will also be available.

The truck’s tilt-away hood offers easy access to the engine compartment. The TerraStar will be available with a 4×2 drivetrain with a 4×4 version to come in 2011, Navistar announced.

“With the introduction of the International TerraStar powered by the MaxxForce 7, there is no other truck manufacturer in the industry today with as complete a line-up of integrated trucks and engines,” Allen added. “The addition of TerraStar gives us a product lineup that can serve virtually any truck need, spanning from Class 4 to Class 8.”