August 1, 2000
TORONTO, Ont. - It's billed as the thunder by the lake, this Molson Indy that descends on Toronto's waterfront every July. And tens of thousands converge on one of the highest profile racing events in... 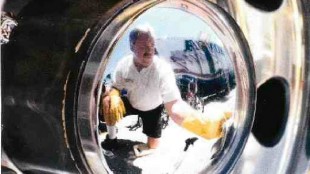 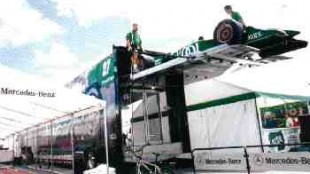 TORONTO, Ont. – It’s billed as the thunder by the lake, this Molson Indy that descends on Toronto’s waterfront every July. And tens of thousands converge on one of the highest profile racing events in Canada.

But competition isn’t limited to the track.

While the crowd watches the blur of four wheelers heading down Lakeshore Boulevard and snaking their way around Exhibition Place, an unofficial multi-million-dollar show and shine competition is waged between the truckers who haul the teams from race to race. The Wednesday before the race weekend is devoted to setting up the tools to prepare for the big event. But the next day sees truckers climbing over their predominantly late-model rigs with cleaners, polishes and rags in a competition of their own.

“Truckies”, if you please, says Rick Towne, who drives one of the trucks that moves Honda Performance Development support group.

He prefers the distinction because the role of a “truckie” on the CART circuit involves far more than simply shuttling the equipment from race to race. And part of that role involves the corporate image emblazoned on trailer-sized murals and cab fairings.

“When the fans start showing up, when they arrive the image of Honda is standing tall.”

It’s ironic, then, that most fans won’t get to see the work, with the paddock area off limits to most visitors. But it’s obvious talking to these truckers (er, truckies. Sorry Rick) that they take this competition of their own seriously, to literally outshine the team next door. It’s simply part of the competitive environment where it does matter whether you win or lose.

“Basically, a truckee knows where every tool, every part is in the whole transport,” adds Towne, who has driven the 18-wheeled vehicles on the circuit since 1986. And their fingerprints are all over these multi-million-dollar loads, ensuring that every piece is secured as it should be.

There’s also the struggle to slip in and out of a truck stop when you’re on the way to a race. “It’s like it’s a big flashing neon sign. Everybody wants to come over to the truck. You want to be polite, but we have a race to get to.”

Greg Hoffmaster, who drives a stainless-steel-clad Century Class for the Penske racing team, says he can’t imagine a better job. And don’t say that you can’t find a decent trucking job straight out of school. He had just picked up his licence when he was hired by the team.

“I’m a big race fan to begin with. Not only do I get to travel around, but we get to work in the pits. (Hoffmaster is in charge of the pit board used to signal drivers about such things as lap numbers.) And there’s the thrill of victory and the agony of defeat and all that.”

All the truckers play a role in the team structure beyond the trucks. Towne covers breakfast, lunch and dinner as Honda Performance’s unofficial cook.

It’s appropriate, really, when you consider the mutiple roles played by the trucks themselves. All the teams use various trailer compartments as mobile offices, and the loading area becomes another shop. Meanwhile, the wall of the trailer acts as a rolling billboard and support for the awning that protects pit crews from the elements.

And Hoffmaster does everything he can to make sure the Penske chrome shines that much brighter than the others.

“Roger Penske, he takes his vehicles seriously,” he says, pointing out the extra touches such as hood scoops and side skirts; the rivet-free stainless steel that adorns the sides of the tractors. “We take great pride in our vehicles.” n