Volvo Trucks North America has unveiled the VNR regional haul tractor, targeting what the manufacturer sees as an increasing focus on regional runs.

“The regional haul segment is changing and growing, and we are going to be part of the solution,” said Goran Nyberg, president Volvo Trucks North America, during the truck’s world reveal at the ExpoCam trade show in Montreal. Last year, 21% of the Class 8 trucks sold in Canada had sleepers smaller than 48 inches; day cabs represented 38% of Class 8 sales. Volvo expects those shares to increase because of factors such as an intensifying driver shortage, as fleets look for ways to attract a new generation of employees. 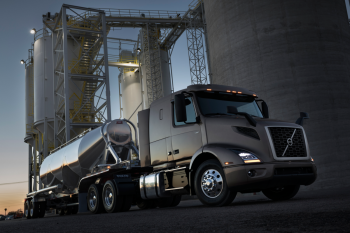 There is no question that the new VNR is dramatically different from the VNM it replaces.

“We wanted to make sure this was an iconic design,” said Brian Balicki, chief designer on the project. “We really looked to key words that would help us support the design process – bold, edgy, innovative, modern and human.” The truck’s curves, for example, drew inspiration from motorsports. The side air intake and grill are meant to have an architectural look and feel. Living space in the sleeper was inspired by the first-class cabins in airlines.

The look of the VNM was outdated, admitted Wade Long, director of product marketing. “There’s other derogatory terms our customers have told me.”

But the changes introduced in the VNR are more than skin deep. The truck’s curves offer aerodynamic enhancements to an industry segment that often misses out on such things, even though their trucks still spend some of their time at higher speeds.

The hood itself has been enhanced in several ways. It sits lower than the hood on the VNM, boosting aerodynamics by 2%, and is also 75 pounds lighter. Mounting the hood to the cab reduces vibrations, Long said, and technicians won’t need to remove splash shields when trying to access the engine, either.

That hood leads to a new grille surrounded by a chrome bezel, with hidden fasteners, and a prominent Volvo logo in the center – the first time the look has appeared anywhere in the world.

End caps on the three-piece stamped steel bumper that sits underneath the grille are tapered so they sit inside the truck’s turning radius. And there’s an optional aerodynamic piece to further enhance the air flow.

Even the headlamps have been reshaped in the name of aerodynamics, but the improvements don’t stop there. Since they don’t run along the side of the fender, the headlights are protected against damage, Long said. The shape and the lamp’s heat sink also combine to circulate warm air inside, reducing the risk of fogging or moisture.

But the changes have hardly been limited to the exterior. Volvo conducted about 2,000 interviews to identify the unique demands and wants of regional drivers. 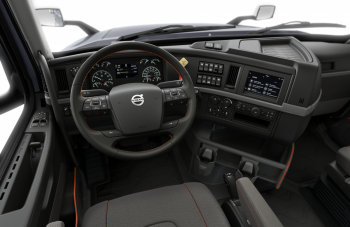 A new rail system that sits under the dash, for example, now allows two cup holders to be located exactly where drivers want them, and can also be fitted with supports for tablets and other electronic devices. And the truck offers the power for such devices through four USB and 12-volt power sources in the cab, and as many as 12 such sources in the sleeper.

Switches in the dash itself were laid out to minimize switch blanks, but also sorted based on their use. Common controls for things like fifth wheel lock slides or electronic controls for 6x2s are at the top. Those used less often – such as switches for PTOs and lighting – are in the lower section. Automotive-like features include automatic lights and rain-sensing wipers, while a lane monitoring system keeps a virtual eye on blind spots.

The traditional space for a radio is now home to the screen for an infotainment system, offering access to everything from Apple CarPlay to navigation or images from rearview-mounted cameras.

Controls are not limited to the dash, either. The Position Perfect steering wheel itself incorporates as many as 19 buttons, supporting what Long refers to as “the human-machine interface”. Other changes bring new control over the steering wheel itself. It telescopes 4.5 inches, and the head tilts 30 degrees. “The stature of the driving pool is changing,” Long observed.

Look through the steering wheel and there’s a five-inch color information display. Drivers are able to customize it several ways, whether they want to watch over fuel economy or monitor batteries and oil pressure. “We made these easy to read,” Long added. Rather than flashing information as codes and symbols, it offers warnings in simple English.

But there are limits to how much color is used. Safety-related warnings, for example, come in red and yellow. Data about driver performance is in green. And it’s not the only place color has played a role in the interior design. Red reading lights, for example, are included because they are less disruptive to anyone in the sleeper. Reflecktor Orange accents in the steering wheel, door panel and seats offer a subtle nod to Volvo’s legacy of safety.

Still other changes are apparent as soon as the door is opened. Panels incorporate cool blue lights, and speakers that were almost behind the seat in the VNM have been moved forward for better acoustics. When the door is opened, a puddle step shines light on the steps below, and storage space in the panel comes in the form of deeper pockets.

The interior comes in three levels, from a vinyl that can be wiped down, a mid-level option that features cloth, and a premium interior package created with a designer cloth. But all seven versions of the new first-class seats are available with each interior package. “Drivers want the same seat in every cab they have,” Long said.

Two extra inches have been added to the seat travel, and hip point has also been lowered, which will be a welcome change for shorter drivers. A quick air release, meanwhile, has been added to drop the seat when entering and exiting, and returns to its original position in one motion. The seatbelts are adjustable, too.

While the idea of heated seats is familiar, these seats can also come with a cooled vented seat feature. “There’s nothing better than having a little air blowing across your legs,” Long says.

Lift the floor mats over the doghouse, and the plate below can be removed by removing just four screws. “You do not have to remove the seats,” Long says.

Meanwhile, the truck’s 113-inch Bumper to Back of Cab dimension will help those who pull 53-foot trailers into loading docks designed for 48 feet. It also helps meet 60-foot length restrictions in California, with a 61-inch sleeper and 48-foot trailer.

“We really believe this is the next step in the trucking industry,” Nyberg said.

The family of trucks comes in three versions including the flat-roofed VNR 300 daycab, the VNR 400 with a 42-inch sleeper, and mid-roof VNR 640 with a 61-inch sleeper.

The standard engine is the D11, and that will still deliver up to 425 horsepower and 1,550 lb-ft of torque, Long says. “Customers are downsizing, we call it rightsizing, to the application.” But the VNR can also be offered with a D13 engine. Trucks with the latter version are 175 pounds lighter than a VNM with an earlier generation of the D13.

Production of the VNR begins August 14, while the VNM will be phased out by the end of the year. “With all the improvements we have made, I’m pretty sure we will have a lot of demand for the new one,” said Magnus Koeck, vice president – marketing and brand management. 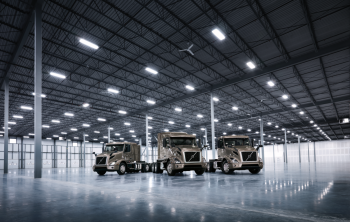