VICTORIA, B.C. – The B.C. government approved a series of recommendations to support the province’s container trucking sector recently, including an adjusted rate structure for drivers.

The recommendations were included in the B.C. container trucking commissioner’s rate and remuneration report, which was aimed at ensuring balance, stability, and competitiveness for the trucking sector.

“As a result, we are creating an enhanced rate structure and implementing several measures, which will benefit more than 1,700 hard-working British Columbians and their families,” Trevena said. “With these actions, we are delivering on our commitment to act on the 2014 Joint Action Plan, and we are going even further to benefit drivers and the industry.”

Paul Johal, Unifor-Vancouver Container Trucker Association president, said they made the submission to the commissioner’s rate review, which impressed upon the government that fair rates provide stability in the Lower Mainland’s port trucking industry.

He also said the announcement from the provincial government sets truckers “on firm footing for collective bargaining this summer,” with an expiring agreement July 30.

“Many industry stakeholders participated in the rate review. The recommendations in the report reflect their input and I want to thank each of them for their efforts,” added Michael Crawford, B.C. container trucking commissioner. “Government’s measured approach to the implementation of the recommendations benefits drivers and will ensure the ongoing stability and advancement of the sector.” 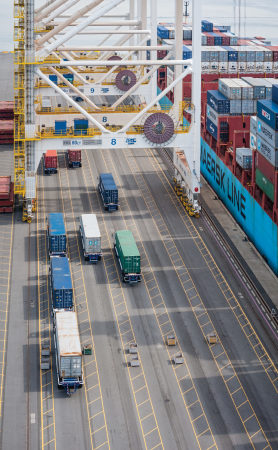