April 15, 2013
VANCOUVER, B.C. -- An in-depth report commissioned by Metro Vancouver has been conducted to determine how dirty - or not - the province’s truck fleet is. 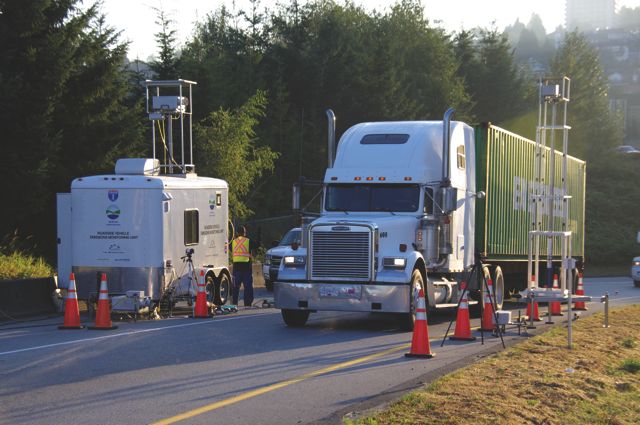 A remote sensing unit is positioned at roadside in B.C. to collect data on heavy-truck emissions in the province.

VANCOUVER, B.C. — An in-depth report commissioned by Metro Vancouver has been conducted to determine how dirty – or not – the province’s truck fleet is.

The study was conducted using remote emissions sensing at 26 locations throughout the Lower Fraser Valley over a 55-day period between July and October 2012. Envirotest Canada set up remote sensing devices at roadside sites, weigh scales and brake check points, which use infrared technology to measure the output of hydrocarbons, NOx, particulate matter and carbon monoxide from heavy-duty trucks as they pass through an infrared beam. Emissions from a total of 11,700 heavy vehicles were read, and then traced back to a specific make and model year using the province’s registration database.

Out-of-province trucks were included in the study, but could not be assigned a make and model year. A total of 17% of the Class 8 trucks registered in the region were captured in the study.

“It was a very thorough study that now tells Metro Vancouver whether they have a problem or they don’t,” Ed Theobald, program and project manager with Envirotest Canada told Truck West. “We didn’t do any interpretations; that’s up to Metro Vancouver to make decisions on how to proceed with this information.”
Envirotest did, however, offer a number of suggestions, including creation of a “mandatory annual heavy-duty inspection program” that would be “effective but not overly onerous on heavy-duty vehicle operators.” Envirotest noted “The newest model vehicles and those with low mileage accumulation could be exempted.”

The study found that the emissions standards implemented by the US Environmental Protection Agency (EPA) and adopted by Canada, have been effective in drastically reducing PM and NOx.

“Certainly not all trucks are dirty,” Theobald told Truck West. “What we did see is that the condition of the on-road fleet roughly follows the standards that were put in place (in 2007 and 2010).”
Interestingly, the technology also identified the “outliers;” those late model tractors with higher than expected PM output, indicating a DPF Delete, or other emissions system tampering, may have been performed.

“We saw the outliers,” Theobald said. “We saw that tenth percentile truck, that 2009 model year that was dramatically higher than it should’ve been. There would be a way to identify them.”

The remote sensing technology, Theobald said, could be used to find vehicles that were not in compliance with the emissions standards that apply to that particular truck’s model year. He said the technology is sound and reliable, but it would likely be used to refer suspect vehicles for further testing, not to act as judge and jury.

Currently, heavy vehicles in B.C. don’t require any emissions testing, unless they serve Port Metro Vancouver. The Ministry of Environment, however, has hinted it would consider adapting the province’s Air Care program to the heavy vehicle population, since the common perception is that heavy trucks are heavy polluters. In other parts of North America, remote sensing is used to “clean screen” vehicles that emit so little, they don’t require further emissions testing while identifying gross polluters that should require a closer examination.

The Metro Vancouver study did find that newer tractors had substantially lower emissions.

The study also debunked the myth that heavy trucks tend to belch smoke.

In addition to the remote sensing units, Envirotest also deployed a 50-ft. tunnel that was used to collect emissions data. As a truck drives through the tunnel, its exhaust is collected and analyzed by sensors along the top. The results from both collection methods were comparable, the report said.

While Metro Vancouver has yet to announce the next steps it will take to control heavy-duty truck emissions, the study seems to suggest older model-year vehicles should be targeted. The study found that the 75% of vehicles built in 2007 and earlier, contributed 90% of the NOx and 98% of soot emissions. “Retiring or retrofitting older vehicles may be one strategy for reducing emissions from this sector,” read a memo from Metro Vancouver to the Environment and Parks Committee.

The study also found the “gross emitters” – the dirtiest 10% of the overall fleet included in the study – contributed: four to five times more NOx and PM; 11 times more carbon monoxide; and eight times more hydrocarbon than the overall heavy vehicle fleet. Included in this “gross emitter” category are trucks that performed poorly, “due to emission control technology failure, or in some cases, tampering with emission controls.”

The findings revealed that: “although more recent model years are significantly cleaner than older vehicles, gross emitters are present in every age group of vehicle.”

The study did not find any significant variation in emissions levels among trucks from various jurisdictions.

Theobald said truckers were clearly wary of the roadside remote sensing units, and before long were warning each other of their location over the CB radio.

“As soon as the trucking industry figured out we were at roadside, they’d get on the CB radio and say ‘They’re going to fine you!,” Theobald recalled. “We tried to make it perfectly clear that this was simply a study; that you’re just a digital point on a reference chart.”

Still, some drivers attempted to defeat the system, by coasting through the beam without applying the throttle. To obtain an accurate reading, the system requires some acceleration as the truck’s exhaust stack passes through the infrared beam.

“We had many readings that we took defeated as they’d decelerate through the beams,” Theobald said.

Not to be outdone, RSD operators began locating the readers on slight uphill grades, so truck drivers would have to apply the throttle as they drove through the beam. Accurate readings can be obtained with a vehicle speed ranging anywhere from 10-70 km/h.

Whether the Envirotest Canada remote sensing devices will return to B.C. roadside for enforcement purposes or further studies remains to be seen. Metro Vancouver presented the findings of the study at a recent meeting with the Environment and Parks Committee and will deliberate further on the findings before deciding if and how to crack down on heavy truck emissions.