LAS VEGAS, Nev. — I felt a pang of trepidation as the Daimler engineer relinquished to me the driver’s seat. On one hand, it was like any other well-appointed Freightliner; the familiar DT12 automated transmission, the fancy Bose Ride System seats and all the frequently used switches where you’d expect to find them on the dash. 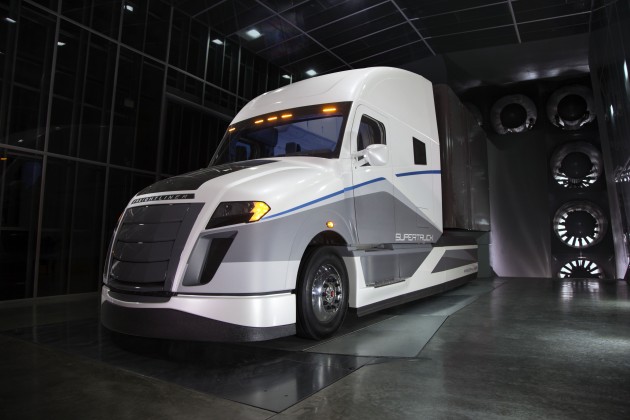 On the other hand, I was acutely aware I was about to drive Daimler’s SuperTruck – an $80-million collaboration cost-shared by Daimler and the US Department of Energy. And so it was with an abundance of caution that I pulled out of the Las Vegas Motor Speedway parking lot and negotiated the speed bumps lining the road that led to the highway. After all, the side fairings that ran from tip to tail of this tractor-trailer configuration were mere inches from the pavement and I got the sense every itty-bitty piece of this tractor-trailer was worth much more money than anything I’ve got socked away in the savings account.

Daimler was one of several North American truck and engine OEMs to receive DoE funding to develop a SuperTruck, and the first to complete its project. The original goal was to improve freight efficiency – as measured in tonne miles per gallon of fuel consumed – by 50% and to improve brake thermal efficiency from the current standard of about 42%, to 50%. However, internally, the company set out to build the most fuel-efficient truck in the world, explained Derek Rotz, the chief engineer assigned to the project.

The baseline truck for comparison purposes was a 2009 Freightliner Cascadia.

“We started with a clean sheet of paper,” Rotz explained. “We brought computational tools to bear, such as 3D modeling and we took integration to a new level.”

Designers had to overcome opposing forces as aerodynamicists and powertrain engineers both looked to maximize performance. For example, optimizing aerodynamics called for a seamless, smooth front end but engine cooling requirements meant radiator vents were still required. As a result, Daimler developed an articulating grille with vents that open at low speeds and when climbing a hill, when maximum cooling is needed, and close while cruising at highway speeds to optimize airflow over the front end.

Waste heat recovery was also employed to take heat generated by the engine and convert it to energy that could be used to drive the truck or power auxiliary devices. This technology may remain futuristic for the time being, due to cost and weight considerations.

In other instances, the various objectives aligned perfectly. For example, improving aerodynamics meant less torque was required to overcome rolling resistance, which enabled engineers to downsize to a more efficient, lighter-weight 11-litre engine. A total of 2,800 lbs was eliminated from the design, which can be converted into payload or improved fuel mileage.

As the project neared completion, it was clear the SuperTruck would far surpass the original goal, though Rotz acknowledged not every technology that was applied is practical today.

“Some technologies need time to mature,” he said. Still, many of the technologies or systems used on the SuperTruck can be applied now or in the near future.

“We estimate 60-70% of the efficiency gain can be attributed to short- and near-term gains that don’t have significant hurdles,” Rotz said.

Brake thermal efficiency improved to 50.2%, just better than the 50% target. However, freight efficiency was boosted a whopping 115% – more than twice the original goal. The SuperTruck achieves 12.2 mpg on real-world highways with a gross weight of 65,000 lbs. Rotz said this represents the greatest fuel economy achievement of any of the SuperTruck projects.

Out on the highway, the SuperTruck drove like any well-integrated, modern tractor-trailer. We were hammered by strong, gusting crosswinds and with little space to pass underneath or between the truck and trailer, it was a bit of a rocking ride. The biggest adjustment I had to make as driver was getting used to the mirrors, which were a fraction of their usual size, replaced with tiny cameras that showed full, unobstructed views of the side of the vehicle upon larger displays mounted inside the cab. Great for aerodynamics, but I found the shadows shown on the in-cab displays took some getting used to. It would be interesting to see what the display is like at nighttime but I didn’t get the opportunity to drive the SuperTruck after dark.

The challenge now for Daimler and other truck manufacturers will be to take the lessons learned from the SuperTruck experiment and apply them to current or future-generation production vehicles. In some cases, regulatory changes may be required to maximize the benefits, pointed out Sean Waters, director of compliance with Daimler Trucks North America. Two changes he’d like to see made to US laws include eliminating the need for exterior-mounted sideview mirrors altogether and eliminating the need for a front licence plate.

“The current law mandates how we achieve the visibility goal,” Waters explained. “It requires us to have a mirror and in this case, the law has not caught up with the technologies. Mirrors should be an option.”

Replacing sideview mirrors with cameras could improve fuel economy by 1.5%, he noted. Also, even the elimination of the front licence plate can allow engineers to optimize airflow over the front of the vehicle, saving the industry thousands of gallons of diesel fuel each year.