The truck was demonstrated Jan. 9 at the Mack Customer Center in Allentown, Pa., to a group of truck editors and DSNY representatives. Jonathan Randall, senior vice-president of North American sales and marketing, said DSNY – the world’s largest sanitation department – is the ideal fleet to put the truck through its paces.

“There’s no tougher testing ground for something like this,” he said.

“We can’t do it without this electric truck,” said Rocky DiRico, deputy commissioner of the NYC Sanitation Department. The fleet runs 2,346 collection trucks, 99% of which are Macks. It collects about 12,000 tons of residential and industrial waste every day. The truck will arrive in New York City by Monday, Jan. 13 and will be put into service sometime around Earth Day in April.

Its initial route has already been chosen – an 18-mile waste collection route in a middle-class New York neighborhood. But don’t read into the short distance, DiRico said.

“The real test is how many times you stop and start in the course of the route,” he explained. “The route could be 10 miles, or 40 miles. We deal more with hours than miles, with house-to-house stops. It’s hours of operation and how many stops there are in the route.”

The truck is expected to handle an eight-hour collection route, at which time its remaining battery capacity will be analyzed. Uniquely, New York City uses its collection trucks to plow residential streets. DiRico said this first-generation electric LR may fall short of that capability, but he’s confident subsequent versions will be able to handle both duties.

“Ultimately, we have to get to plowing,” he said. “We can’t have a fleet for plowing and collection. Our success and the uniqueness of us is we plow with our collection trucks. Battery technology has improved dramatically already and we feel within the next year, battery technology is going to be 50% more efficient, and that should take us to plowing.”

“It appears that has already been factored in,” he told Today’s Trucking of cold weather.

In addition to reduced emissions, other benefits of electric refuse trucks include reduced noise and lower maintenance costs. 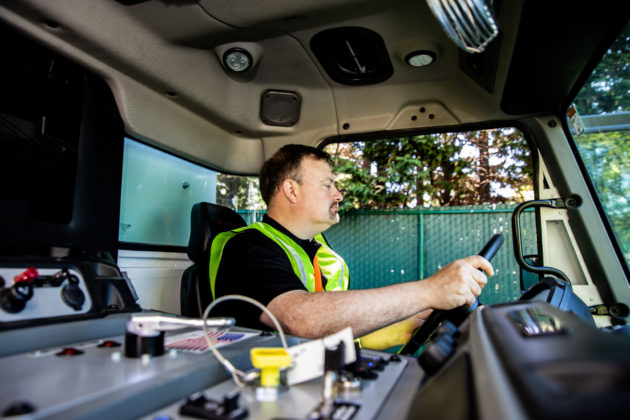 Refuse is an ideal application for electrification, Horton noted, because it’s a closed loop duty cycle in which the trucks return to home base daily for charging. The frequent starts and stops allow for regenerative braking, during which energy is captured, stored and then used to assist propulsion.

The electric LR features two AC motors and produces 496 peak hp and 4,051 lb.-ft. of torque. The truck is equipped with a Heil 25-yard capacity DuraPack 5000 rear loader. The LR being delivered to DSNY features a two-speed Mack Powershift transmission and Mack axles. But instead of being adorned with a gold bulldog on the front to signify a vertically integrated vehicle, this truck’s bulldog is copper-colored to denote its fully-electric powertrain.

When the electric LR is put into service, DSNY will be closely monitoring several metrics, including: uptime; range; miles; driver feedback; acceleration; payload; regenerative braking; gradeability; state of charge at start and end of route; charging time and duration; and overall functionality.

DiRico said he’s looking forward to putting the truck into service, and assured it won’t be babied.

“I look forward to beginning the process of testing, piloting and beating the hell out of that truck,” he said.