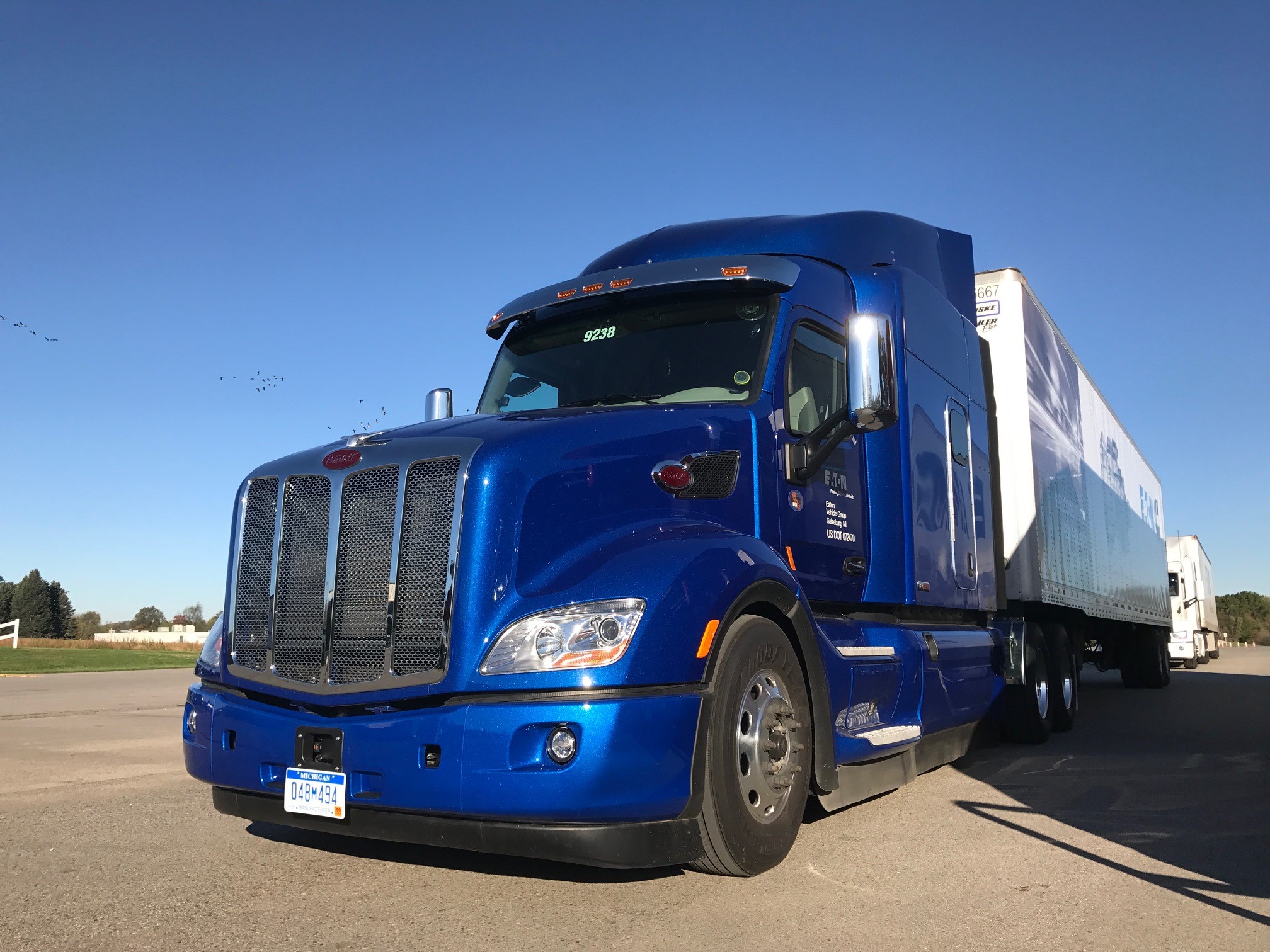 Don’t call it an AMT

There are no, and will never be, manual versions of these transmissions, which were built from a clean sheet design to operate as automated transmissions. The result is a lighter-weight design – 200 lbs lighter compared to the UltraShift Plus – which also delivers faster, more precise shifting as well as serviceability benefits. We drove this Pete 579 with the new Eaton Endurant automated transmission.

“With an AMT (automated manual transmission), you started with a manual gearbox, so you had constraints where the shift pattern had to make sense to the driver,” explained Matt Erdmann, manager of program management with Eaton. “With Endurant, we said we are not holding onto any preconceived anything. We started with a clean sheet of paper and did what made sense. So, it took a lot of restrictions off our engineering team.”

One key departure from traditional AMTs is that the Endurant features linear shift rails, eliminating the traditional sideways shift pattern that was required on manual transmissions to make them driver-friendly.

“You would have to have three arms to try to shift this manually,” Erdmann explained. “Linear shift rails allow us to optimize the design for speed and reliability. You don’t have any wasted motion sideways.”

His comments were made during a press ride-and-drive near Battle Creek, Mich., this week. I drove a 2018 Peterbilt 579 with Cummins X15 engine rated at 450 hp and the Eaton Endurant automated transmission. We were loaded to about 70,000 lbs GVW and drove a route consisting of a mix of freeway and secondary highways. The transmission was designed for linehaul applications and to operate efficiently on both types of roads. On the Interstate, we cruised along in 12th gear at about 1,100 rpm and on the secondary roads, the transmission dropped to 11th gear so it would enjoy the fuel economy benefits of direct drive while at slower road speeds. Eaton calls this shift schedule algorithm Gear Logic.

The transmission shifted quickly, and readily skip-shifted up to eighth gear. The Endurant also had predictive cruise, which would adjust the vehicle speed based on GPS data of the terrain we were traveling over and about to encounter to take advantage of the truck’s momentum and reduce the need for downshifting.

Our route took us to Eaton’s Marshall, Mich., proving grounds, where we got to try out the Endurant’s low-speed features, including urge to move. This allows the truck to creep forward or backwards at a steady speed of about 1.5 mph when the brake is released, great for docking or coupling. It even worked when I parked halfway up a 15% grade. It’s a nice feature for crawling along in stop-and-go traffic. You can work through the gears manually by working the shifter stalk, which is mounted on the steering column. The steering column-mounted shifter was deigned by Paccar.

Eaton’s new Endurant has been calibrated to provide optimum shifting when mated to the Cummins X15 engine and is available on Kenworth and Peterbilt trucks spec’d for linehaul applications. Those trucks powered by the Paccar MX engines will receive the Paccar-branded version of this transmission, which is identical from a hardware perspective – aside from the badging – but contains different shift calibrations based on the operating parameters of that engine.

Both transmissions can be ordered with Economy or Standard configurations, with standard offering some more performance-minded shift scheduling. The biggest improvement over previous Eaton AMTs is the faster and smoother shifting, enabled in part by a new 430-millimeter, cushioned, self-adjust organic clutch.

“The clutch itself is a big contributor to the low-speed maneuverability you get,” Erdmann explained. “Those smooth launches and great control you get when starting to move.”

It also uses a diaphragm spring, which should contribute to greater reliability. The clutch actuation method has also been improved.

Looking at the transmission confirms there is, in fact, a noticeable difference from a traditional AMT. The Endurant has a sleek, compact design with wiring and sensors housed internally and very little in the way of extraneous parts bolted on. “It’s very streamlined and very weight-efficient,” said Scott Davis, who heads up the Eaton Cummins Automated Transmission Technologies joint venture that is rolling out the new product. “If you took a manual and automated it, you are adding stuff to it as opposed to designing around it.”

This is the first product rolled out under the Eaton-Cummins joint venture that was announced a few weeks ago, but the Endurant was in the works for 3.5 years. Eaton worked closely with both Cummins and Paccar through that period to integrate the products.

Davis feels the Endurant will quickly displace other Eaton transmissions currently being spec’d in linehaul applications.

“In linehaul, I think that the Endurant will quickly phase out previous products. It’s that much better,” he said.

Fortunately, with its 110,000-lb GVW limit and ability to handle up to 1,850 lb.-ft. of torque, it will also be a viable option for Canadian fleets grossing more than the standard U.S. weight of 80,000 lbs. Jordan Rock, systems engineer, who was along with me for the drive, said that was a key design consideration.

In addition to improved drivability that will be appreciated by drivers, service managers will also find things to like on the new Endurant. The clutch actuator is now housed where it can be accessed without pulling the transmission.

“This can be repaired in a matter of hours, versus a full day or longer when you have to remove the transmission to get to a concentric-style actuator that’s packaged around the input shaft,” said Erdmann.

The oil drain intervals have been stretched out to 750,000 miles, compared to the 500,000-mile intervals on the UltraShift Plus products. It also uses half the lubricant, thanks to a precision lube system that directs lubricant exactly where it’s needed. The Endurant also comes loaded with prognostics, which will notify a fleet when a failure could occur. That communication is conducted through whichever telematics system the fleet us currently using.

There’s also a fluid pressure sensor that notifies the driver when the fluid is reaching a critical low point and a sight glass so maintenance managers can see how much lubrication remains.

While the new Endurant may be the first purpose-built purely automated transmission, Eaton officials said they are confident future transmission innovations will be based around automation.

“It was a big investment to do this,” acknowledged Erdmann. “This takes a lot of time and money. I think you saw AMTs evolve because that’s where the market was – there wasn’t great demand for automation back 10 years ago, and us, as companies, when we were releasing products it made sense to bring both products into the market at the same time – an automated and a manual. I think as you look forward throughout the industry, linehaul has switched to automation and there isn’t that call for manuals. So, you won’t see a lot of significant investments in brand new manual transmissions – it just doesn’t make sense for the industry. I think any revolutionary change going forward will be automation focused.”