SUNNYVALE, Calif. – Driving a fully electric Peterbilt 579, everything is different, from the pre-trip inspection requirements to the driving experience itself.

The company has partnered with TransPower to electrify a Model 579 tractor and 520 refuse truck. The 579 was recently available for short test drives at the new Paccar Innovation Center in Silicon Valley. 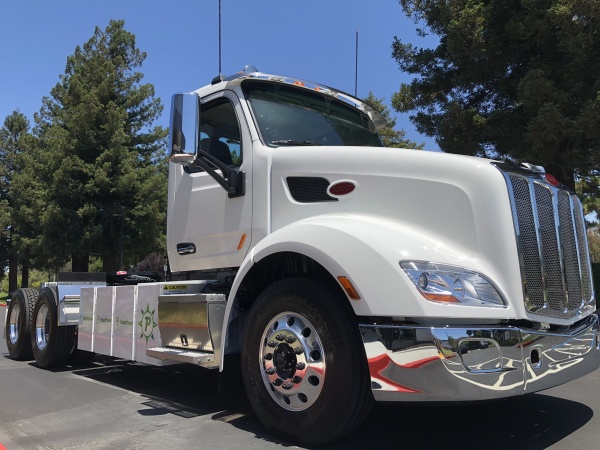 “While the vehicle does mimic how a diesel truck would run, there is some driver training required before they hop into an electric vehicle,” explained Matt Vito, integration and commissioning manager with TransPower. “Even during the pre-trip walkaround, there are a lot of things different. You’re not checking a dipstick. You’re checking to make sure all the orange cables are secured. You’re not checking fuel levels. You’re making sure you are driving off with a fully charged vehicle. Those are the types of things that are just a little different to a driver’s mindset.”

The electric 579 featured eight 44 kW-hour battery packs, each weighing slightly more than 800 lbs. This gives it a range of 150 to 250 miles, depending on application. This truck was designed for drayage operations, which feature plenty of stops and starts for regenerative braking and opportunities to charge overnight. A full charge takes about four hours.

Vito said battery technologies are constantly improving, and the next generation of batteries are expected to have 50% greater energy density than the third-generation batteries in use today.

TransPower has been working on Peterbilt for about two years. It handles the integration of the electrical components. 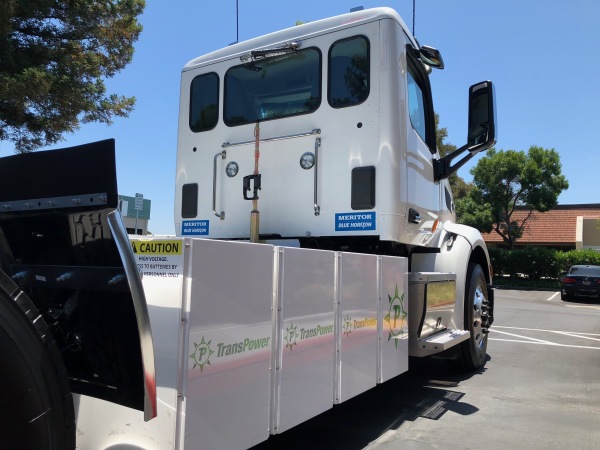 “They do a great job providing us with the information we need to integrate with the vehicle,” Vito said of Peterbilt. The company focuses on yard tractors, school buses and Classes 6-8 trucks.

The Model 579 produced about the diesel equivalent of 450 hp at peak torque. The throttle response was instantaneous, but Vito said it has been dialed back to eliminate tire wear. It still took off eagerly when the throttle was applied.

“With the first iteration of the software, I was breaking the tires free as I was driving down the road,” Vito recalled. “We toned down the motor controls so the driver cannot do that.”

Regenerative braking puts energy back into the battery packs and reduces the amount of brake pedal pressure required. This results in a reduction in maintenance costs.

“The transmission, axles, and brakes all have to be maintained still,” said Vito. “But brake usage does go down. We have customers reporting they are getting double the life of their brakes.”

TransPower has about 30 trucks running on its technology, most of them in California. It attaches two electric motors to an Eaton automated manual transmission (AMT). Combined they produce 300 kW of power.

“Using the AMT, we can have better control of our peak power and everything else using a much smaller motor,” Vito explained. “It’s a very small footprint.”

Getting used to the performance of an electric truck takes a little time. The response to the throttle and brake are completely different than in a traditional diesel.

“A lot of drivers at first have the mindset to let off the pedal as it’s shifting, but we let drivers know to just let the software do the job. Keep your foot in the pedal for the speed you want to be at and the software will do everything else,” Vito explained.

Vito dispelled the idea that electric trucks aren’t able to perform in cold weather climates such as Canada. The company’s next-generation of battery boxes will feature active thermal control, which will heat – or cool – the batteries when necessary.

“With the proper steps taken to protect the batteries, everything else on the vehicle is fine,” Vito said. “It’s all about keeping those batteries above that temperature threshold.”