Drivers played a big role in the design of the new truck. International sought the opinions of hundreds of professional drivers and evidence of their feedback can be seen throughout the cab. The air horn lanyard has been restored and put back where it belongs in the upper left corner and the air brake releases have been moved further from the driver so they don’t encumber movement into the sleeper.

“The only time you touch those is when the truck is stopped, so there is no reason to occupy the primary real estate on the panel with those releases,” explained Jeff Sass, senior vice-president of sales and marketing with Navistar. “Everything we are doing today is based around the driver.”

The instrument panel is cleaner and better designed. Virtual gauges are shown on a vibrant driver display. Improvements to functionality are found throughout the cab. Ample USB and 12-volt outlets keep drivers connected. A deep ledge along the dash provides useful storage for phones, pens and other small items.

The HVAC system – a source of complaints on the ProStar – has been completely redesigned and its reliability improved.

“We have dramatically improved the efficiency of the HVAC system,” said Joe Werth, vice-president, new product development. “It is 40% more efficient in terms of speed to defrost the window.”

Sightlines have also been improved. The vent window has been eliminated to offer greater visibility out the sides. Werth said the LT boasts 15% better visibility out the passenger side window and a 5% improvement out the left. Forward visibility is better as well thanks to a new, one-piece curved windshield and a redesigned hood.

Better door seals reduce interior noise. I drove an LT 625 with the new Cummins X15 engine rated at 450 hp. Drives were limited to a few laps around Navistar’s three-mile test track but the truck drove nicely, was quiet and comfortable. The shifter and engine brake have been integrated on the right side of the steering column for easy access. The most frequently used buttons and switches have been moved closer to the driver.

“The focus was to bring closer to the driver the things that were important to them,” said Werth.

The redesign did not extend to the sleeper, which is a direct carryover from the ProStar. Serviceability, however, was improved thanks to new routing and clipping and easier access to the fuse panel inside the cab.

While the LT was designed with drivers in mind, its owners will be equally happy with the upgrades. International is touting a 7% fuel economy improvement over its most efficient ProStar ES model. This comes from a combination of improved aero, 3%, and powertrain enhancements which count for 4%. Aerodynamic improvements include a reshaped hood and bumper and more slippery mirrors as well as the redesigned windshield.

“We looked at how the bumper was structured, how air flowed under and over the hood area and improved the shape of that to accommodate aerodynamics,” Werth explained.

Engine improvements came in the form of calibration activities and the reduction of parasitic losses. Werth said both Cummins and Navistar N-series engines will deliver the same fuel economy gains over previous models.

The Diamond level interior with black cherry panels in the truck I drove was handsome. But Navistar officials were quick to point out drivers didn’t want a truck that felt like a car, despite the trend towards more automotive-inspired interiors.

“We have introduced features to make this vehicle easier to drive and more capable of supporting a less experienced driver to be able to come in and operate this vehicle effectively,” Werth explained. “It brings in more automotive familiarity, however the robustness of the design allows for operations with gloves, that kind of thing. It’s a balance. The issue of driver retention was probably one of the primary drivers for us in how we brought the design in. You do get some of those automotive features as a result, but where we tried to make the difference was in the robustness of the dials, how the driver interacts with them, – can you grab them with gloves on in the winter? – the size of the toggle switches. Those were all designed to accommodate a truck driver.”

Sass said feedback from fleets emphasized the truck had to be a vehicle drivers were happy with.

To win the hearts of drivers, Navistar realized uptime was critical.

“We are trying to get our truck to be every bit as reliable as any automobile is today,” Mooney said.

The LT series is supported by OnCommand Connection, Navistar’s open architecture remote diagnostics platform. It provides vehicle health reports and advises customers on the most appropriate action when fault codes appear. Navistar is also offering over-the-air engine updates, allowing customers to keep their software updated without taking the truck off the road.

“When I think about uptime, it’s about reliability and durability, making sure the truck never has to come in unless it’s for scheduled maintenance,” Mooney said.

So far, the LT has been well received. Sass said more than 3,000 orders have been received. Navistar is in the process of revitalizing its entire product line. The first of these new models to be unveiled, the LT, is a comprehensive upgrade over the ProStar. Drivers will find it quieter, more ergonomic and comfortable to operate and will enjoy better visibility. Less reaching and straining will be required. The ProStar served International well but drivers won’t be asking for their ProStars back once they’ve driven the new LT. 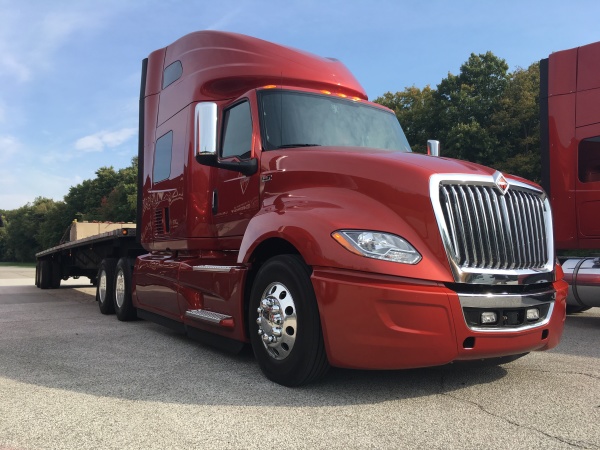