DULUTH, Ga. – The Black Dog led a convoy of 10 Mack trucks on an 850-mile journey through seven states after the launch of the new Mack Anthem highway tractor in mid-September. After a glitzy launch event in Allentown, Pa., Sept. 13-14, the trucks had to make their way to the North American Commercial Vehicle (NACV) show in Atlanta, Ga., where they’ll make their public debut.

CDL-holding editors were allowed to participate in the convoy, driving a number of Mack Anthems of various configurations, as well as a Granite and Pinnacle sporting the new interiors. This was a unique opportunity, and one that I enjoyed from start to finish. We had a lot of fun along the way, but the real treat was getting some meaningful time behind the wheel of the all-new Mack Anthem.

The Anthem looks like nothing else on the highway, and its bold design commanded a lot of attention along our route. Every time we pulled into a truck stop, the trucks attracted a crowd – especially the Black Dog, an all-black Anthem with decked out interior that was in my mind the star of the show and deserving of the lead position. Drivers climbed around and inside the trucks when we were parked, and during a “truck stop takeover” at the Love’s travel plaza in Raphine, Va., Mack reps handed out free t-shirts and hats. There are undoubtedly more Mack Trucks fans today than when we started our trip.

The high interest in the new-look truck was obvious, among truck drivers and even the motoring public. We turned our share of heads on the highway, and that’s a pretty good feeling when cruising down the road in a rig that truckers and even four-wheelers deem worthy of a thumbs-up. The Anthem seems poised for success because it boasts a throwback design, while also improving fuel economy by up to 3% compared to the Mack Pinnacle with sleeper cab. Who says efficiency and bold traditional styling can’t co-exist?

From the oversized, boxy headlights, to the squared fenders and robust grille, this is a trucker’s truck. And it’s been built around a Mack powertrain that performs beautifully; the mDrive automated transmission and the MP-series engines have been dialed in to work in harmony. The mDrive shifts precisely when needed and the MP8 provides ample power to pull some significant grades at typical gross vehicle weights. The engine brake was quiet, yet effective, able to hold the truck back even down the long, intimidating Fancy Gap grade averaging 4.5% over six miles. I only tapped the brakes twice on the descent and never felt out of control. Here’s something you won’t see: a Mack with mDrive using one of those runaway truck lanes.

I spent most of my time driving two Mack Anthems with 70-inch sleepers, powered by MP8 engines spec’d with 505 hp and 1,860 lb.-ft. of torque. Both had the 12-speed mDrive overdrive automated transmission – a great combination capable of handling most on-highway applications, payloads, and routes you’ll encounter.

Both Anthems I drove were also equipped with Bendix Wingman Fusion, and I spent most of my driving time using the adaptive cruise control. This adjusted the truck’s speed to account for nearby traffic, maintaining a safe following distance but only intervening with engine and foundation brake applications when absolutely necessary. Some of the brake inputs were a little harsh, but it did the job. I was impressed that when the truck was okay to resume its cruise speed, it did so in an controlled, efficient manner, and didn’t charge back up to the set cruise speed with a complete disregard for fuel economy. It was a nice way to drive.

I appreciated the mDrive when we were in stop-and-go traffic due to construction; a tap of the throttle will prompt the truck to putter along at a slow, steady speed.

The 13-liter Mack MP8 was sufficiently powered to pass other trucks on uphill climbs and we were loaded to more than 60,000 lbs. At no time did I feel more power was needed. I did use the kickdown feature a few times for an extra boost of horsepower, which was handy when completing a pass.

Drivers who were drawn to the truck by its new exterior, were equally amazed when they poked their heads inside, and for good reason. The interior has also been completely revamped. The steering wheel has a racecar-inspired flat bottom. This is a unique attribute that’s also functional, as it provides a little extra belly room and makes it easier to climb inside the truck or into the sleeper. I like the look of the flat bottom steering wheel and it didn’t interfere with my preferred hand positions at any time or while backing.

The steering wheel has been kept relatively simple, with minimal buttons placed on it. The cruise control and radio can be adjusted on the steering wheel, but it’s not overwhelming. The gauges have been repositioned and are much more stylish. The rocker switch icons are etched in to prevent fading, and the entire dash lights up beautifully after dark. All interior and exterior lighting is LED, which provides better illumination while drawing less power.

Mack has modernized the instrument cluster while maintaining a truck look and feel. It’s not as car-like as other recently introduced interiors, and I suspect that’ll appeal to many truck drivers. But touch points have been enhanced and the dash and instrument panel are of better quality than those previously found in the Pinnacle.

The new interior has been given to the Mack Granite and Mack Pinnacle axle-forward models as well. The Anthem replaced the Pinnacle axle-back model, and will be its top seller, but the axle-forward Pinnacle will be retained and rechristened, simply, the Pinnacle. Pinnacle and Granite customers will appreciate the new interior, which completely revitalizes those models. I spent one leg of the trip driving the Granite, and the new interior makes this workhorse a nicer truck to drive. I can also attest to the quality of the new sound system – who can resist a little AC/DC while cruising down the open road?

Mack loaded the Anthem interior with storage. They claim to offer an industry-leading 27 cubic feet, and I wouldn’t dispute their calculation based on an exploratory inspection of the sleeper. They put storage bins and compartments everywhere possible.

The redesigned seats are comfortable and easy to position. The door must be closed by the handle, which struck me as odd, but it felt durable. The sightlines are much improved, thanks to a hood that slopes down, and both one- and two-piece windshields are available. The hood-mounted mirrors are perched atop the hood, which makes them look like space alien antennae, but this was done for a reason. They’re aligned with the side mirrors to improve airflow, and they do provide exceptional visibility alongside the truck and trailer.

I spent one leg of the trip sprawled out in the sleeper. It takes little effort to get comfy back there and I suspect the Anthem would make an excellent team truck. The sleeper curtain is now attached by magnet rather than Velcro, so a driver who needs to access the bunk while his or her partner is sleeping can do so quietly without tearing back a Velcro curtain. The new stand-up sleeper provides plenty of head room and the radio and temperature controls are well placed for easy access while lying down. The Anthem can be spec’d with single or double bunks. Numerous sleeper configurations are available.

Day one of our road trip saw us travel from Allentown, Pa., to Greensboro, N.C. It took about 12.5 hours with stops and gave me a real appreciation for what professional drivers do on a daily basis. Next morning, we were right back at it for the 300-mile run down to Nextran Truck Centers in Duluth, Ga., where the trucks would be put on display for a few days, staged, and then transported to the NACV show in downtown Atlanta. It was exhilarating to pull into the Nextran parking lot, all 10 trucks in formation, air horns blasting, as dealer reps shot video and took photos.

The new Mack Anthem is a sharp looking truck, loaded with storage, with a more modern, higher-end interior. The powertrain is dialed in and a pleasure to operate. The truck’s also efficient. What could make it better? Maybe a Canadian edition with our flag displayed on the Anthem badge, and a Maple Leaf tastefully stitched somewhere inside the cab. After all, national pride isn’t just an American thing; a Canadian Anthem would be a beautiful thing. 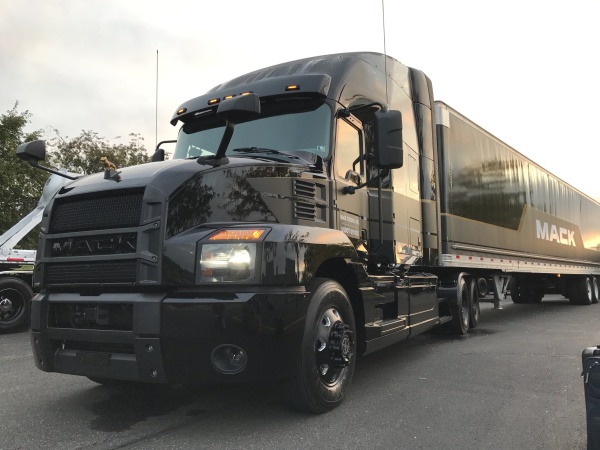