This is a truck that when seen from the exterior will steal your attention for more than a moment. And yet it’s also a truck you can feel good about owning and operating, because it’s a Western Star that can finally compete with other aerodynamic models in terms of fuel efficiency. Still, Western Star designers stayed true to the brand’s heritage by creating a truck that looks nothing like the others that comprise this segment.

If you were to trace the outline of the various fuel-efficient models on the market today and leave the insides blank, it would take a discerning eye to differentiate them. The same cannot be said of the 5700XE, which somehow manages to eschew the rounded, jelly bean-styled design of other leading models while attaining fuel economy that the EPA considers good enough to place within the same bin as the others under its greenhouse gas emissions program.

T-shirts worn by Western Star people at the truck’s launch declared the 5700 brought an edge to aero, which is an appropriate tagline for this truck.

After a high-profile launch before more than a dozen trucking industry journalists in Sin City, I was fortunate to have the opportunity to stay behind and put the truck through its paces over a two-hour journey in and around Las Vegas. The 5700 I drove had a 72-inch sleeper, an EPA13 Detroit Diesel DD13 engine rated at 455 hp/1,550 lb.-ft. and the DT12, 12-speed direct drive automated manual transmission.

This is the integrated Detroit powertrain that the company says will provide a significant portion of the fuel savings customers will see from this truck, compared to previous Western Star vehicles. They’ve opted to make the truck available only with Detroit power and no other automated manual will be offered. Yes, there’s a risk some Cummins loyalists may be unhappy with this decision, but Western Star officials are confident enough in the product that they feel demand for the new truck will be such that customers will accept the Detroit powertrain and then become converted, once they experience its efficiency and performance.

Aside from the Detroit powertrain, further gains come from the redesigned front end, which better directs airflow over and around the cab. Interestingly, this is the same base cab you’ll find on traditional Western Star models, including its vocational offerings. The Western Star cab is known for its steep windshield, which is not exactly conducive to aerodynamics. However, engineers discovered ways to help assist the air up over that windshield. The most visible of these enhancements is a kick panel on the hood, just before the windshield, that directs air up and over the cab. This air ramp, if you will, doesn’t impact visibility over the hood as long as your seat is properly positioned. 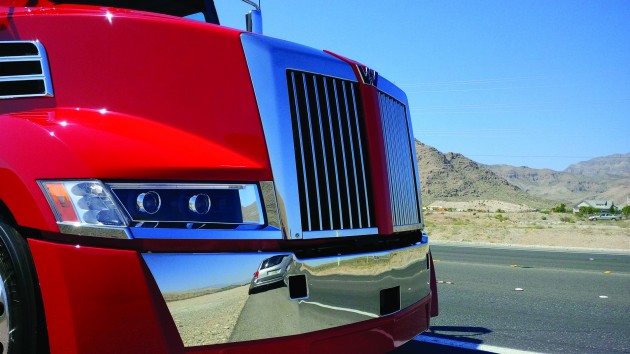 The front bumper has been redesigned to keep air from getting caught up in the wheel wells. Two end sections dubbed ‘fangs’ (yes, even the bumper end caps on this truck have attitude) reduce wind resistance without detracting from the truck’s unique look. The Western Star 5700 has a distinctive face that’s unlike any other truck in the marketplace.

The raised center section of the hood has been carried over and this section on the truck I drove was painted matte black, reducing glare off the hood. The sun visor has also been kept, which helps direct air over top the roof cap. Other aerodynamic improvements come in the form of fairings and flares that encourage air to flow to where it will provide minimal disruption to the vehicle’s forward progress.

Inside, this truck is unmistakably a Western Star. The most notable upgrade is a redesigned wood and leather steering wheel with controls placed at the driver’s fingertips, which allow the driver to scroll through the information on the driver display, flash the marker lights or to control the cruise, Bluetooth, radio, etc.

However, while other models have transitioned to a more automotive-styled driver environment, the 5700 is pure truck. The signal light stalk is heavy, the gauges large and the dash has a classic, driver-friendly layout. The driver display area is small compared to other models, which limits the likelihood of distraction and also helps retain the classic look of the interior.

Western Star has brought over from the vocational segment some serviceability features, including easy access to the fuse panels and power distribution module, which can be accessed from the passenger seat by simply removing four bolts. The entire panel can be pulled out from its home here for easy serviceability – a vocational feature that technicians will appreciate just as much on an on-highway tractor.

The 5700 uses the same honeycomb-style sleeper cab that’s offered on its previous models. Its lightweight construction means the 5700’s total weight compares more favourably to other aero models as the sleeper size increases. There has always been a perception that the Western Star is a heavy truck due to its steel cab, however the truck I drove weighed in at a very respectable 17,500 lbs and that was with disc brakes and that 72-inch sleeper.

The Western Star 5700 provided an exceptionally steady ride, particularly while cornering, an attribute that stems in part from its wide cab mounts.

It was comfortable to drive, particularly with the DT12 automated transmission. There are some surprisingly steep grades outside Vegas, including a long 6% climb near Summerlin, which tested the DD13. It was up to the challenge, though I bet many Canadian customers will opt for the DD15, which will net better fuel economy when you’re running the hills. Climbing that long 6 percenter, I was able to employ the kick-down feature available on the DD13/DT12 combo, which when the pedal was depressed to the floor dropped a gear and provided a little extra torque to manage the climb.

The DT12’s paddle shifter allowed me to drop a gear or activate the engine brake without reaching to the dash.

Another nice feature available on the Western Star 5700 is Meritor Wabco’s OnGuard collision mitigation system. I’ve experienced it before, but not in heavy traffic such as that I encountered returning to the city. When in cruise control OnGuard measures the distance to other vehicles in front of the truck and applies the engine and service brakes as necessary to maintain a safe following distance. It took some getting used to, before I was willing to really trust the system but after a few miles of interacting with heavy traffic I found I was able to place my trust in the system and let it do its thing.

OnGuard seems to have been dialed in; it didn’t overreact to vehicles that momentarily cut into my personal space, as long as those vehicles were moving faster than I was and quickly got out of my way. When cruise isn’t set, audible warnings will alert you to potential danger but it’s up to the driver to adjust his or her speed as necessary. OnGuard is a really nice option to have, especially in traffic.

My daytime drive didn’t give me the opportunity to check out the improved lighting system offered in the 5700 but officials claim a new projector beam headlight design provides much better nighttime visibility. I know they look good from outside; we got a sneak peek at the 5700 after dark and the headlights ensure you can identify this truck even when it’s dark out. A thin LED accent strip along the top and outside edges of the lamp give it a distinctive appearance. 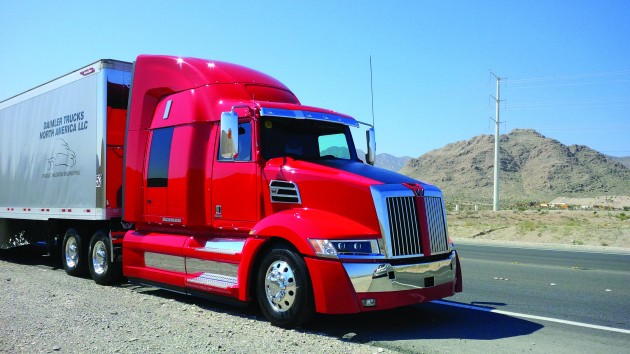 Only a handful of 5700s have been built and it was exciting to be among the first to drive one. Now the race is one to see who’ll be the first to own them. This is a truck that will stand out on the highway and separate its owners from the herd. Production is scheduled to begin next April and will ramp up over the summer. When it comes to design and drivability, the Western Star 5700 hit not just home runs, but grand slams. If its fuel-efficiency comes in on target and it’s priced right, this truck may finally allow the brand to break through into the on-highway tractor segment in a big way.

– For more on the launch of the Western Star 5700, including a photo gallery, go here.