CHILLICOTHE, Ohio — The Kenworth T880S set-forward axle began rolling off the production line here in March, rounding out Kenworth’s vocational truck lineup with a truck that’s much more versatile than its predecessor. The W900S was a pure mixer, designed to do a single job. The T880S, on the other hand, has been created with a broader range of capabilities in mind.

It will still be primarily a mixer truck, but customers are expected to also put it to work as a dump truck, crane truck, snow plow, or vacuum truck. The key to the versatility of the T880S is the range of bumper configurations being offered. Mixer operators can choose a short 28-inch spread between the front axle and the bumper, but customers can also opt for a 29.5-inch bumper setting or a box bumper set 31.5 inches in front of the axle. 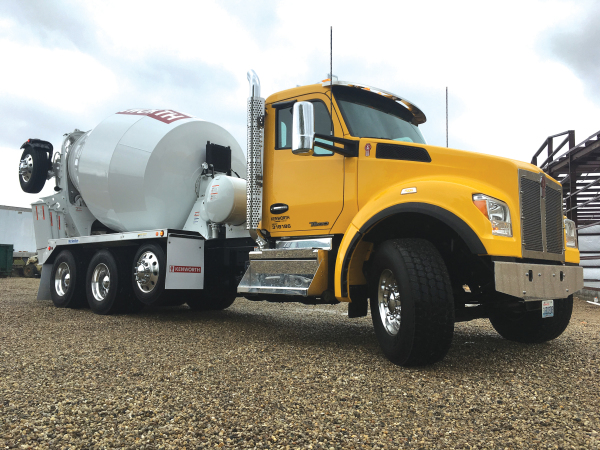 I recently drove two T880S trucks on highways and secondary roads near the Chillicothe, Ohio plant where they’re produced. The trucks included a mixer with 11-yard McNeilus body and that 28-inch bumper setting. The other was a dump truck with the bolder, more stylish bumper at a 29.5-inch setting. Its Rogue dump box was loaded with 10 tons of sand.

In addition to the wider range of bumper settings, the new T880S offers a full range of engines, from the Paccar PX-9 nine-liter for weight-conscious mixer operators through to the Paccar MX-11 and MX-13 engines with 11- and 13-liter displacements, respectively. Also available are nine- and 12-liter natural gas engines from Cummins. The short hood won’t accommodate a larger 15-liter engine, but nor did its predecessor, the W9S. The nine-liter can save nearly 1,000 lbs compared to a 13L.

The mixer I drove was powered by a 2017 MX-11 rated at 430 hp and 1,650 lb.-ft. of torque. We were running empty but the engine was peppy and responsive. The Allison 4700 RDS seven-speed transmission provided smooth, seamless shifting.

The dump truck had the larger MX-13 engine under the hood, which produced 510 hp and 1,850 lb.-ft. of torque. It was mated to an Eaton MXP UltraShift Plus transmission. The payload in the box and the 20K taperleaf front suspension leveled out the bumps and provided a smooth ride. Both trucks had the same front suspension. While 20 and 22K front suspensions were the only offerings on the W9S, the T880S can be had with a wider range of front suspensions – from 14,600 lbs right up to 22,900 – again to accommodate a wider variety of applications.

It’s not just a mixer anymore.

Meanwhile, drivers and owners stepping out of a W900S and into a T880S will be able to appreciate the design enhancements built into the T880 vocational truck. These include a more spacious, automotive-inspired cab taken right from the on-highway T680 model. It offers more room to store hardhats, vests clipboards, and the like.

The sloped hood offers a lower crown with improved visibility out the windshield. That lower crown also improves job site safety; a worker can stand right in front of the truck and see directly into the eyes of the driver rather than be completely lost from sight. Kenworth feels it has the lowest crown in the segment, boasting better driver visibility and work site safety. It’s about three inches lower than that of the W9S.

The truck is also easier to service than its predecessor. A five-piece SMC hood replaces the old one-piece fiberglass design. This allows operators to replace smaller sections of the hood if damage is incurred. Kenworth was also able to shorten the length of the hood by six inches, giving it a true short hood design.

The front axle on the T880S is 18 inches further forward than on the T880, providing more payload while complying with US Bridge Formula requirements. This can amount to a couple thousand pounds of additional payload compared to a traditional T880. It also provides an extremely tight turning radius.

Drivers who’ve spent time in the truck report being less fatigued at the end of a shift, Kenworth officials claim. This can be attributed to a quieter cab and improved visibility, which translates into a less stressful workday. Both trucks I drove featured Kenworth’s Diamond VIT interior, which brings all the luxuries of a premium on-highway cab into a work truck.

The exterior of the T880S looks much like the original T880, with two noticeable exceptions. Of course, the front axle has been moved forward giving the truck a different stance, maybe even a bolder appearance. Also, a keen eye will notice the headlights have been moved above the turn signals from their position below them on the original T880.

The headlights had to be moved up to a deeper section of fender to accommodate the forward axle. There is no change to nighttime visibility, Kenworth officials say, and the same halogen headlight design is employed, offering easy bulb replacements. The redesign of the headlight is the main reason a set-forward axle version of the T880 is just now being brought to market; a typical headlight development program can run two years. It wasn’t as simple as pushing the steer axle a few inches forward.

The T880S can be spec’d with TruckTech+, Kenworth’s answer to remote diagnostics. It can monitor fault codes and notify the owner or maintenance manager on the best course of action. That may include getting the truck into the shop immediately for service, or keeping it out on the road making money even with a fault code displayed on the dash. A new feature is Service Management, which allows the owner to track the vehicle’s service history.

The benefits of remote diagnostics and online repair histories are real for vocational truck fleets, but these operators are slower to adopt the technology than their linehaul brethren who may have trucks scattered all over North America at any given time. Still, tapping into the potential of TruckTech+ does offer potential savings for vocational fleets by way of greater uptime.

The T880S will compete most directly against the Mack Granite, Peterbilt 567, Western Star 4700 and International HX – all in set-forward configuration. Kenworth is expecting to quickly move its mixer customers into the new truck and have already built up an order board some 800 trucks strong. Production will be ramped up this summer. The truck maker also anticipates growing its share in the dump, plow, crane, and vac truck segments, thanks to the added versatility offered in the T880S.

The truck can also be spec’d in a twin steer configuration, which will please Canadian customers. Drivers and fleet owners who move from the W900S will be happy with the enhancements built into the T880S. It’s a nicer truck to drive, it’s quieter and more efficient, and it’s safer to operate thanks to its improved visibility. Production of the W9S will continue for now, Kenworth says, but it’s confident the changeover won’t take long once drivers and owners get a taste of the new truck. I have to agree.