When you spec’ a heavy-haul tractor, some compromise is expected. Here in Canada, we’re allowed to pull some pretty hefty payloads, often over mountainous terrain. To do this we need big noisy engines, stiff suspensions and nothing less than an 18-speed manual transmission. Or do we?

With its new VNX, Volvo delivers heavy-haul capabilities within a package that features all the comforts and amenities found in its VNL highway tractor. It has created a rugged truck with big-time power that drives as smoothly and quietly as any other VN.

I recently spent a couple hours driving a VNX around southwestern Ontario, pulling a load of Challenger Bulk-supplied trash contained within a seven-axle Titan trailer. The load grossed 124,278 lbs and stunk to high heavens. But this is heavy-haul – we weren’t looking for a load of flowers.

It’s true that southern Ontario offers few hills of any significance to truly test the D16 engine. But it does have its share of bumpy, two-lane roads and we spent about half of our drive navigating such roads before venturing through downtown Woodstock and then joining the 401 for some highway cruising.

The VNX is a bona-fide heavy-hauler, not an overspec’d highway tractor. The powertrain features the Volvo D16 engine with 500, 550 or 600 hp and the I-Shift automated manual transmission comes standard. An 18-speed manual is available as well but Jason Spence, marketing product manager, long-haul, said all buyers to date have taken the I-Shift. Not long ago, this would have come as a surprise; early generation AMTs being limited mostly to linehaul applications whether out of necessity or due to perception.

However, the I-Shift has proven to be capable of some fairly robust hauling and across the pond it’s routinely found in applications much more severe than we can throw at it here. Consider that Volvo produces a 750-hp engine in Sweden, which can be mated only to the I-Shift, which is used in off-road mining and logging applications. By comparison, our 125,000 lbs of garbage hauled over southern Ontario’s flat roads was nothing to sweat.

“The I-Shift is fully capable of this application,” assured Spence as we headed out from Expressway Trucks. “It is set up for 200,000-lb GVW and will go even higher than that, but you need application approval.”

This particular VNX was a day cab powered by Volvo’s D16 engine, which produced 600 hp and 2,050 lb.-ft. of torque. The I-Shift was a 12-speed Performance version, which allowed me to override its gear selection if so inclined, or shift into Performance mode for some extra oomph when climbing through the lower gears.

Even at 125,000 lbs, I was able to get up to speed quickly thanks to the I-Shift’s affinity for skip-shifting. This is important on rural roads as it deters impatient motorists from darting out into oncoming traffic to complete a pass.

The VNX shares the same cab as its on-highway cousin but the truck itself is a true heavy-hauler. It is recommended for applications that will remain on-highway about 95% of the time, but that require the occasional off-road foray, whether it be into a landfill site or the bush. The VNX marries aspects of the VNL with attributes from Volvo’s VHD vocational product. For example, the VNX mirrors the 10-inch ride height found on the VHD and features a heavy-haul bumper with a single tow eye. The steer axle can accommodate wide 445 tires but we were running 385 Michelins. The truck also features a dual steering gear for improved handling and a set-back axle that provides a tight turning radius. 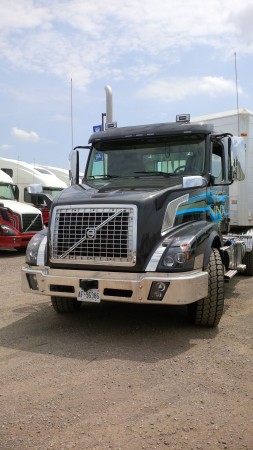 The steering on this truck is exceptional. Even over the bumpier roads we encountered, the harsh inputs from the road were barely felt through the steering wheel. The steering was responsive and comfortable, always.

The VNX also offers an extremely quiet ride, particularly for a day cab. This speaks to a well-designed cab that keeps engine noise and other ambient sounds from invading the driver’s workspace. Noise is not only an irritant, it’s also fatiguing.

The integration between the D16 engine and the I-Shift allows for some special features that are fun and useful. The engine brake is quiet enough you can ignore those municipal bylaws prohibiting their use and effective enough to limit wear on the service brakes.

The cruise control also benefits from the integration between engine and transmission. One of the nice features was to set the highway cruise speed at 100 km/h and the top speed cruise to 108 km/h; this would activate the engine brake automatically when 108 was reached when descending a grade, holding the vehicle within the specified speed window.

With your upper and lower speeds locked in, you can sit back, relax and enjoy the sights.

Visibility out of and around the VNX is excellent, thanks to a short sloped hood and well-placed hood-mounted mirrors. Volvo recently extended the length of its windshield wipers to 24 inches from 22, providing a larger clean view when they’re required. The windshield wiper motors were upgraded accordingly as well.

I didn’t need windshield wipers on this sunny late-July afternoon. I did, however, appreciate the exterior sun visor, which Volvo has chosen to retain while many other OEMs are eliminating them due to interference with aerodynamics. Spence told me Volvo conducted extensive testing and found its exterior sun visor didn’t impact fuel economy, yet actually provided some efficiency benefits.

“The exterior sun visor is functional,” Spence explained. “It reduces the solar load into the truck itself, so the air-conditioning doesn’t have to work as hard to keep the cab cool.”

And of course, it also reduces the glare of the sun. Speaking of sun visors, the internal ones are cleverly designed as well. Two separate visors along the windshield overlap to provide complete coverage. And they don’t swing towards the driver – a potential safety hazard – as there are separate visors mounted above the side windows. These are small things that exemplify the attention Volvo affords safety.

The VNX, with heavy load in tow, over rough country roads, drove as smoothly as any highway tractor and much more smoothly than you’d expect from a heavy-hauler. This is partly due to the tandem drive axles: the 46,000 lb-rated RT-46-164EH from Meritor, which was designed for the Canadian market, its rough roads and heavy payloads, and the 46,000-lb Neway ADZ-246 rear suspension. The front axle was Volvo’s own VF20 rated at 16,000 lbs.

As in the VN, the driver display provides real-time driver performance and coaching info. Dollar signs indicate how well the driver is remaining within the engine’s sweet spot. This can be set up to reward efficient driving, for example, by providing drivers with extra speed, which seems counterproductive, like rewarding good behaviour in prison by giving the prisoner the keys to the bank. But nonetheless, if you want to do that, you can.

Volvo’s driver display is well designed, providing the information you want and need but not so much that it becomes a distraction.

The Volvo VNX was designed to bring an on-highway driving experience to the heavy-haul segment and it has accomplished that mission. It makes heavy payloads less daunting for drivers with little or no heavy-haul experience. And it’s a nice looking truck, too.

Volvo began taking orders for the VNX late last year and so far, not surprisingly, most of the interest in the truck has come from Canada. The truck I drove was one of several demonstration vehicles that are making the rounds among customers. There are many heavy-haul applications within Canada that are well suited to the VNX. In the oilpatch and the quarry, the landfill and the bush, the KWs and Petes may have to make some room for a new heavyweight contender.