GREENBELT, Md. – The Commercial Vehicle Safety Alliance has released the 2015 International Roadcheck results today and found that out-of-service rates for Level I Inspections were at the lowest on record.

According to the CVSA, of the 69,472 total inspections (that took place from June 2-4) 44,989 were North American Standard Level I Inspections, which is the most thorough roadside inspection. Of those Inspections, inspectors found 1,623 or 3.6% of drivers and 9,732 or 21.6% of vehicles with out-of-service (OOS) violations. Those numbers represent the lowest rates for which CVSA has data, back to 1991.

Level I Inspections consist of a 37-step procedure where a driver’s record of duty status and safety of the vehicle are examined. Drivers have to provide items like their licence, medical card and hours-of-service documentation. The vehicle is checked for braking system, cargo securement, and exhaust system among other things.

“CVSA’s International Roadcheck is the largest targeted enforcement program on commercial motor vehicles in the world, with nearly 17 trucks or buses inspected, on average, every minute, over three days,” said CVSA acting executive director Collin B. Mooney, CAE. “However, we must remember that the work done over that 72-period represents only a fraction of what’s accomplished every day by approximately 13,000 CVSA-certified local, state, provincial, territorial and federal inspectors at hundreds of inspection locations across North America. They work every day to keep our roads safe by performing the same truck, bus and driver inspections conducted during International Roadcheck.”

FMCSA acting administrator Scott Darling also commented: “Commercial vehicle inspectors are highly trained, dedicated professionals whose sole focus is protecting the safety of everyone traveling on our highways and roads. The annual Roadcheck event is just one example of a continuing strong partnership among local, state and federal safety enforcement personnel. It also serves as a valuable reminder that when it comes to commercial vehicle safety, everyone has an important role to play. We must give large trucks and buses extra space to maneuver, avoid lingering in blinds spots where you can’t be seen, never allow ourselves to become distracted drivers, and never drink and drive.”

In total, there were 69,472 truck and bus inspections during International Roadcheck this year. Of all inspections, 777 seatbelt violations were issued. 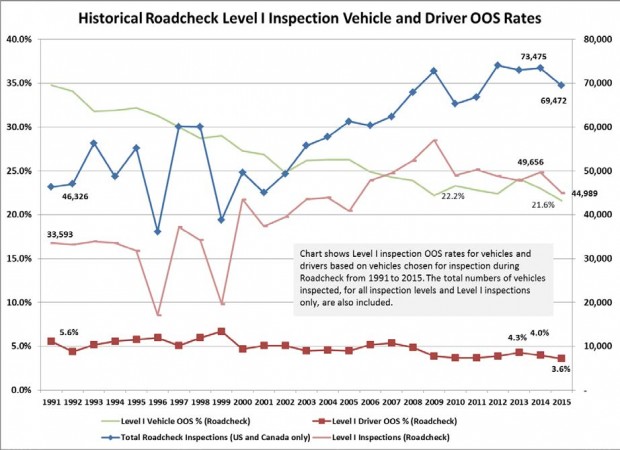