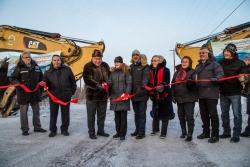 INUVIK, NWT – The road residents of the Inuvialuit Settlement Region (ISR) in Canada’s Northwest Territories have been championing for more than 50 years is finally here.

While final road-grading, and the installation of signage and guardrails continues, the all-weather road from Inuvik to Tuktoyaktuk, ending on the shores of the Arctic Ocean, was officially opened Nov.15.

Construction of the 138-kilometer northern highway began in January 2014, but lobbying efforts by the community to get a passage built to allow year-round shipment of goods and a lower cost of living for those in Tuktoyaktuk began in the 1960s.

The new extension to the MacKenzie Valley Highway will replace the annual construction of the 187-kilometer winter road required to get shipments in and out of the town.

Until last week, when the four-month winter ice road wasn’t in service, the only way into Tuktoyaktuk was by plane. The cost of food in the community was more than double that of places like Edmonton, and rising at a rate of up to 6% per year, according to a 2013 research study done by Dennis Bevington, federal Member of Parliament for the Western Arctic area.

The savings to Tuk’s 900 residents will amount to over $1.5 million, while also increasing tourism revenue by an estimated $2.7 million annually, increasing jobs, and giving residents a chance to do things like further their education at Aurora College in Inuvik, while still being able to travel home regularly. 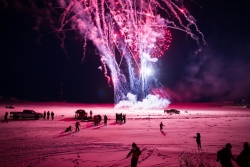 The northern outpost is Canada’s only community north of the Arctic Circle to be connected to the rest of the country by an all-season road. The Government of the Northwest Territories estimates that between 60 and 175 vehicles, including commercial trucks, will travel the new road daily.

In order to respond to the anticipated need for commercial drivers, E. Gruben’s Transport is now offering a Class 1 and Class 3 driver training course in Tuktoyaktuk. So far, the government says the project has created 130 positions as drivers, heavy equipment operators, summer students, and apprentices for the area.

The project came with a price tag of $300 million, with maintenance costs estimated at up to $15,000 per year, per kilometer. In comparison, the cost of the winter road was about $560,000 every year.

Construction will continue into 2018, meanwhile the opening of the highway came with much fanfare, including an official ribbon cutting, food, and fireworks.

Research along the gravel road is expected to continue until April 2019, to monitor the ground temperature and the performance and effectiveness of the highway over time. 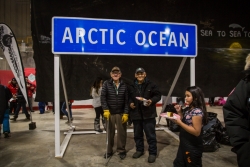