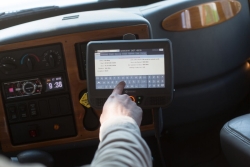 TORONTO, ON – Investing in new technologies, including Electronic Logging Devices (ELDs), is the key to creating safe, efficient companies that attract both customers and new drivers, speakers at an Omnitracs panel said last week.

Industry experts at the session explored supply chain management, ELD compliance in Canada, and the adoption of new technologies.

Stephen Laskowski, the president of the Ontario Trucking Association and of the Canadian Trucking Alliance, said driver retention was a big issue in the industry, but he believes attracting new drivers to trucking is a bigger issue. An issue he says can be addressed through better compliance, in part, by adopting new technologies like ELDs.

Drivers who have already adopted the ELD technology see it as a good thing, he said.

Chief Executive Officer of One for Freight, David Carruth, agreed with Laskowski, saying that traditionally drivers have been viewed as a commodity instead of a team member in fleets, but to attract and retain drivers it is important fleets make them feel included.

Carruth also said that because the driver is often the only in-person contact a shipper has with a fleet, companies want to ensure those interactions remain positive, by helping drivers to feel invested in their team.

Laskowski says creating a positive environment for drivers also means supporting them as they deal with the inefficiencies that can sometimes sour a relationship with a shipper.

“The electronic logging device regulation is bringing to head the inefficiencies in the supply chain, specifically those that drivers bear the brunt of, inefficiencies at loading docks, inefficient loading times themselves, all of the things, and we can go on forever about them,” he said.

“Drivers are people too, they want to have feedback that they’re doing well. It could be with fuel programs. It could be with driver and safety incentive programs,” he said. “Nobody wants to be at a bottom of the list, so everybody wants to do better, and that interaction and that team building seems to come from some of those kind of reporting mechanisms that might exist out there.”

Cuthbertson said adoption of the ELD technology will not only allow drivers better metrics for how they are doing, but will allow them to better plan their days, giving them more positive interactions with dispatchers.

Although the mandate making ELDs mandatory in the United States comes into effect in less than three weeks on Dec. 18, there is no firm date for when the devices will be mandatory in Canada. Despite the lack of oversight north of the border many fleets are already using ELDs in order to be compliant in the U.S.

Laskowski says a device mandate will make the playing field level for all fleets, creating a better pricing and compensation environment for carriers and drivers alike.

“It’s the hope of many carriers in Canada, the good carriers, that the level playing field comes. That carriers now compete in a fair and compliant world where management practices and service, as opposed to finagling the regulations, is how one succeeds,” he said.

Laskowski says the mandate creates an opportunity for fleets that have not been compliant with Hours of Service (HoS) by pushing their drivers to work longer hours, to either change or exit the industry.

While some fleets continue to be hesitant about introducing the new technology, all three panelists agreed adding the devices sooner rather than later, makes good business sense.

“It’s building systems that allow you to make better decisions. That give you better information,” said Carruth.