MUSKEGON, MI — Air disc brakes just got a lot more accessible, for trailers at least, with the introduction by SAF-Holland of its new P89. It’s part of a two-model series, the other one being the premium P89 Plus. The base-model P89 can be customized to suit specific fleet demands, and it will work on any axles in the company’s broad range of air and mechanical suspensions. But the key is its price. 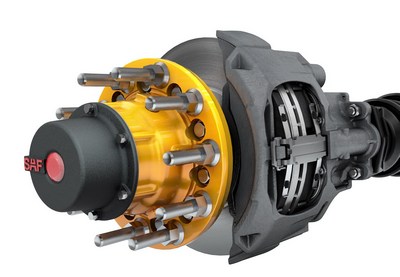 It will cost you about US$700 per axle over the price of drums, which is half or less than what the price for air discs has been. With sizeable service savings on top, the lower tariff should be compelling, says SAF-Holland, especially for fleets whose major objection to air discs was a matter of up-front cost.

Air discs also gained a poor reputation when they first arrived on the scene two and more decades ago — think disintegrating rotors — and some memories are long. Stories about the early days of truck disc brakes abound, and even SAF-Holland  president Steffen Schewerda calls the company’s first model — the European SAF IntraDisc from 1996 — “a disaster”. North American attempts were no better.

But they were over the hump around 2004 and things have only improved since then, the most important victory being the development of a durable rotor. By 2007 SAF had shipped a million disc-equipped axles, two million by 2013.

Market share in Europe is about 75% for air discs. Schewerda doesn’t see us going that far in North America, suggesting we’ll top out at a little “north of 50%”.

We presently see air disc penetration at a little less than 10% for trailers, between 10 and 20% on tractors, with “significantly” higher numbers in Canada than the U.S.

At the heart of the new P89 air disc brake is the ‘veteran’ SAF SBS 2220 caliper and 430mm-diameter vented rotor. The dual-piston caliper is said to apply a more even pressure pattern across the brake lining than competitive single-piston designs. The 45mm-thick rotor provides 30% more wear volume than competitive designs, says SAF-Holland.

The brake comes standard with a “robust” 3.5-inch-diameter parallel spindle or an optional lightweight taper-spindle configuration, which reduces weight by 10 lb per axle, and uses industry-standard bearings and wheel seals to reduce maintenance costs. It’s backed by a 5-year warranty.

The P89 Plus does not lower the price, costing about the same as current and competitive trailer air discs, but it does claim to provide a significant reduction in the total cost of ownership. It comes standard with a 7-year warranty, being a maintenance-free bearing system that uses large 89mm front and rear bearings, that are individually sealed and lubricated with high-temperature long life grease.

The bi-metallic design of the SAF Integral rotor allows the rotor to expand and contract in a radial direction, which keeps the braking surface flat and eliminates the umbrella effect.

Both P89 brakes are available on the SAF CBX air-ride and ULX spring-ride suspensions.