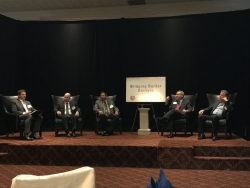 MISSISSAUGA, ON – Engagement in the political process at a grassroots level is key to making headway on industry issues, experts are saying.

With the renegotiation of the North American Free Trade Agreement (NAFTA) on everyone’s minds, the industry analysts said now more than ever engagement from the bottom up is crucial to having a say in the issues that will shape the future of trucking.

President of the Canadian Trucking Alliance (CTA), David Bradley, said keeping members engaged, is a constant challenge faced by trade associations on both sides of the border.

“I think at some point the carriers will become engaged, but I don’t think we’re engaged enough,” he said. “If everybody does one thing, once a year, that helps.”

Bradley says it’s not always enough to send executives and lobbyists to speak with legislators, because they don’t own and drive the trucks. The stories need to be told by those on the road.

The panel agreed there is an opportunity for Canadians to lobby politicians in the U.S., but because they can’t vote or donate to campaigns, they need to take advantage of other opportunities.

Bradley said lobbying isn’t a bad word south of the boarder the way it can be in Canada, but legislators can’t just be told about a problem, they need to be given something to do about it. The volume of legislation politicians in the U.S. deal with is much higher than that in Canada, he said, creating greater opportunity for deals to be made, but fleets and member organizations have to have a plan in place before setting foot in Washington.

President of the TCA John Lyboldt said one of the top things on the wish lists of lobbyists and negotiators should be to address the thickness at the U.S. – Canada border.

He said the automated customs processes, as they are right now, are broken, leaving drivers waiting at the border to be cleared by the FDA or other government organizations, even after they have been successfully pre-cleared.

Bradley said delays at the border are, in part, due to paranoia, which causes the system to rely heavily on people over the automated procedures already in place.

“We still put the emphasis on that one human being, that one border agent, where if he’s had a bad day, he’s going to make your life hell,” he said.

President and CEO of Erb International, Wendell Erb, agreed with Bradley’s assessment saying there is a lack of trust at the border. Erb hopes any trade deal would involve policies good for both Canada and the U.S.

Erb and the other panelists were cautious about what could be achieved in the on-going NAFTA negotiations after no deal was reached by the time the parties walked away from the table yesterday.

Bradley said that he’s not involved with the discussions, but can sense the frustration from Canadian representatives.

“My hopes of modernizing the agreement have been tempered by ‘do no harm,'” he said. “Trucking has been a major beneficiary of that agreement, and I’d hate to think of, if we turn the clock back to before NAFTA, what that will do for the aggregate output of the North American economy.”

Other topics covered in the first panel included the Electronic Logging Device mandate, autonomous vehicles, scheduled construction on bridges at the Detroit crossing, and recruitment.