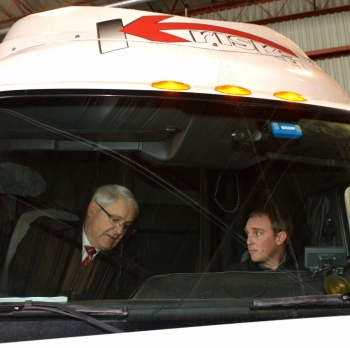 Draft versions of the rules have been published in Canada Gazette Part 1, and once finalized are to roll out within two years.

“This will make truck drivers less prone to fatigue,” federal Transport Minister Marc Garneau said after announcing the proposed regulations. “It will make our roads safer.”

Canadian-based truckers heading across the border already have to comply with the U.S. mandate.

“For a number of years, the Canadian Trucking Alliance has been pointing to research that shows a universal Electronic Logging Device mandate would have a direct and immediate impact on curbing behaviors strongly linked with higher crash rates such as driving over [their] prescribed limits of service, which leads to fatigue,” he told a crowd of fleet executives and media assembled in a Trailcon Leasing service bay.

“These Electronic Logging Devices can help commercial drivers and employers comply with existing Hours of Service regulations and help reduce the potential of driver fatigue. They also help drivers and employers on the administrative side of their work, and the devices’ electronic records virtually eliminate the need for time-consuming paper logs.”

A two-year rollout will allow enough time to deploy the devices, Garneau added. “If we can do it quicker than that, that would be even better.”

The rules are essentially expected to mirror those that are now in place in the U.S.

“There are almost 30,000 trucks a day that travel between Canada and the United States,” Garneau said, responding to Today’s Trucking question about any proposed differences in the mandates. “It helps if we have the same rules on both sides of the border.”

The new federal rules would only apply to federally regulated carriers, but Garneau will be encouraging his provincial and territorial counterparts to enact ELDs in their own jurisdictions.

Ontario Transport Minister Steven Del Duca said his province is “extraordinarily supportive” of the rule. “Anything that we can do collectively to make sure that we are supporting and enabling road safety is something we need to embrace.”

“The time to debate the safety benefit of ELDs is over,” added Scott Smith of JD Smith and Sons, speaking for the Canadian Trucking Alliance. “By supporting the adoption of proven technology that will help to address and reduce fatigue in truck drivers, and help to reduce one of the main factors that lead to distracted driving, this is a good day for road safety.”

“Our current system of tracking hours by means of pen and paper is an outdated one, and one that has too many opportunities for unscrupulous operators to pressure their drivers to fudge their records. While the majority of carriers in our industry are safe operators and have policies and procedures in place to ensure compliance with hours of service regulations, there are always outliers in every industry,” he said. “Some operators will low-ball freight rates, and do so on the back of their drivers fudging their books to make the run possible. We all pay a price for this. Safe carriers who operate legally end up competing against rates that can’t be met in a proper operation. The public pays a price as a result of sharing the road with some of these operators who may be forcing tired and unsafe drivers out onto our roads.”

Millian rolled out Electronic Logging Devices as early as 2013 when he was overseeing safety and compliance at a fleet in southwestern Ontario. Within six months, more than 90% of its drivers were happy with the shift away from paper logs, he said.

Louis Carette, a driver with Kriska Transport, has used an ELD since 2011 and wouldn’t go back. But acceptance by some of his peers did take time.

“It was mixed reviews at first because everyone’s scared of change. They think, ‘Oh, you know I’m going to run out of time to park,'” he recalls. “If you’re on paper and running a legal logbook, you should have no kickback or worry on electronic logs because it’s the same thing. Just electronic. More user-friendly.”

He has cut it close on a few occasions, pulling into truck stops with just 10 minutes left to go, but has yet to see it change the way he operates.

“The Hours of Service rules are not going to change,” Carette stressed. “If you’re obeying the rules, it really shouldn’t matter.”

Exemptions for the oil and forestry sector remain, adds Stephen Laskowski, president of the Ontario Trucking Association and head of the Canadian Trucking Alliance.

Admittedly, the change is first and foremost a compliance issue, he said. “If we didn’t have compliance issues with paper, we wouldn’t be doing this.” But Laskowski also says the focus of Electronic Logging Devices will help to reduce fatigue.

He leaves little question that the “underbelly” of the industry will fight the proposed rules, but he hopes the government will consider the source of such arguments. “I have yet to see one logical reason why we shouldn’t be bringing in ELDs.”

“You’re always going to get some pushback for just any kind of mandate. People just don’t like being forced,” said Terry Shaw, executive director of the Manitoba Trucking Association. “This is about Hours of Service compliance management – not about the Hours of Service. If you need a logbook today, you’ll need an ELD tomorrow.”

But the rollout of ELDs can make a difference in operating procedures.

“It’s as much training and learning for the operations group as it is for the drivers themselves, as to how you can do it, what you can do, and what you can’t do,” said Gary Arnold, president of Manitoba-based Arnold Bros.

Windsor, Ontario-based Onfreight Logistics has had to recover trucks and drivers who have run out of hours, and customers had to be educated about the impact of tightly controlled electronic logs, said Steve Ondejko, fleet president and chairman of the Ontario Trucking Association. Rack loads and other low-priority loads sometimes have to be parked in favor of those critical to a company’s production, and the fleet has also opened additional terminals in Kentucky and Pennsylvania to support the shift.

“It’s not only putting ELDs in. It’s actually educating the customer. Educating our operations people to understand the good way of doing business,” Ondejko said. “It’s really a change in the way you do business.”