May 16, 2012
CAMBRIDGE, Ont. -- Challenger Motor Freight has embarked on an aggressive strategy to rejuvenate its fleet, and by year’s end will have replaced more than 400 tractors – or nearly a third of its entire fleet. 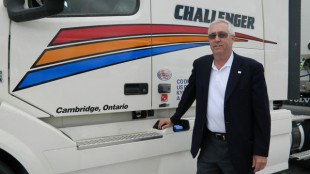 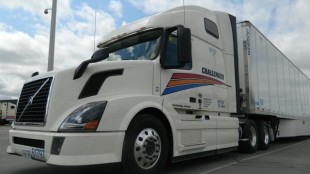 A Volvo VN with Challenger’s new logo. The striping no longer covers the hood, saving about $400 per truck and also reducing the cost of hood repairs.

CAMBRIDGE, Ont. — Challenger Motor Freight has embarked on an aggressive strategy to rejuvenate its fleet, and by year’s end will have replaced more than 400 tractors – or nearly a third of its entire fleet.

By the end of the year, Challenger’s oldest highway tractor will be of a 2010 vintage, president Dan Einwechter told Truck News during an interview today at Challenger headquarters.

This investment comes after the company replaced most of its trailer fleet with 600 Stoughton and 400 Wabash trailers, all configured for long combination vehicle (LCV) applications. The new trailer purchases were part of a “right-sizing” strategy, which saw the 1,000 new units brought in to replace 1,400 aging trailers, Einwechter explained.

The new tractors – more than 200 of which have already arrived – will look a little different than those flying the Challenger colours in the past. The company has decided on a more modern paint scheme, which offers both practical and stylistic benefits.

“We’ve had these stripes for 30 years, as of next year,” Einwechter said of the company’s traditional red, yellow and blue paint scheme. The colours will remain the same, but the logo has been updated to give it a more modern look. And because the decals now begin on the doors rather than the hood, there are cost savings as well.

Einwechter said less decaling material is required, resulting in a savings of about $400 per truck. And since the decals no longer extend to the hood, any repairs requiring a hood replacement will be more cost-effective.

“The moment it touches hood, if you have to change the hood out you have to re-detail it,” Einwechter noted. Towards the rear of the cab, only a small piece of decaling covers the cab extender, another piece of the truck that’s susceptible to damage. The tail end of the red stripe can easily be replaced by an amateur, at no significant cost.

Challenger’s rebranding initiative is being implemented in stages, and as recently as a few weeks ago new trucks were still arriving with the traditional decaling. The company has now adopted the new logo on its internal communications and all new tractors. Most of the 1,000 new trailers Challenger has taken delivery of are rather bare, and that’s because the company hadn’t yet decided on a final design.

“Only 300 of them have any decaling on the side of the trailer, the rest we deliberately left clean because we weren’t sure what we were going to do going forward,” Einwechter said.

In a more subtle move, the company is also changing the location of its truck identification numbers from the side of the bunk and the bumper (where it was often rendered nearly invisible by road debris) to a cleaner spot above the visor and high on the back of the cab.

The new tractors include of a mix of Volvo VNs, Freightliner Cascadias and Kenworth T700s. Nearly all have automated transmissions and every one is equipped with stability systems and Michelin’s X One wide-base tires.